Uri Zvi Shachar: A Pious Belligerence. Dialogical Warfare and the Rhetoric of Righteousness in the Crusading Near East, Philadelphia, PA: University of Pennsylvania Press 2021

Tomas Zahora: Nature, Virtue, and the Boundaries of Encyclopedic Knowledge 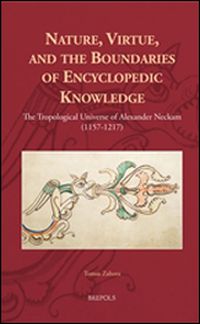 Operating on the premise that the encyclopedia as a genre functions as a "mirror of the culture that conceives it", Tomas Zahora takes us on an ambitious tour of the education, career and entire oeuvre (biblical commentaries, sermons, poems, didactic tools, encyclopedias) of the relatively neglected Alexander Neckam. These factors influenced Neckam's presentation of the natural world in the prose De naturis rerum and verse Laus sapientie divine, which have traditionally been disregarded as mere precursors to the "really interesting encyclopedias of the mid- to late- thirteenth century", such as Barthomolaeus Anglicus' De proprietatibus rerum and Vincent of Beauvais' Speculum maius (45, 215). Yet as Zahora illustrates, Neckam's transitional position and the diversity and range of his writings permit for the study of a mind at work, yielding new insights into medieval encyclopedias, their authors, and their audiences.

Neckam lived in exciting times: the transition from training in liberal arts in cathedral schools to the rise of the university (Neckam studied in Paris and taught in Oxford); the shift from an emphasis on grammar-driven textual exegesis to dialectic; the discovery, translation and integration of the "new" Aristotle (the libri naturales, new logic, and their associated Arabic scientific and philosophical treatises) which spurred scholars from the mid-twelfth to the later thirteenth century to ask different questions about the nature of things and knowledge itself; and eventually, the transmission of the knowledge obtained by new disciplines and methods of study, via the mendicant orders' regional studia and pastoral work, to audiences around Latin Christendom in the "golden age" of encyclopedism and other pastorally-minded reference works by the mid- to late-thirteenth century. Neckam's writing sought to address the pastoral, legal, ethical, and moral questions he encountered as master, canon regular, abbot of Cirencester, and papal judge delegate. He was familiar with the vagaries of secular and ecclesiastical courts and politics as well as contemporary spiritual and intellectual sea-changes.

Yet, Neckam did not, could not, fully participate in these developments. Following Bernard Ribémont, Zahora sees Neckam's writings as valuable evidence for the process and pangs of the transition between an older Augustinian and Isidorean exegetical and textual approach to comprehending the natural world and a newer Aristotelian syllogistic approach. As other authors have described it, this represented a shift from the homo celestis attempting to uncover moral and allegorical parallels between the divine word and human words used to grasp and describe the material world (the better to understand the Creator and his redemptive plan for humankind) to the homo faber interested in the observed phenomena of the material world per se and the discovery of its underlying principles through logic and dialectic (52).

Approaching the created universe not as a philosopher or physicus (scientist), but as a moral theologian, Neckam attempted to incorporate the unfamiliar methodology of Aristotelianism into an older exegetical and grammatical framework (46). Although conversant with the new Aristotle and Salernitan question literature, Neckam, unlike some of his English contemporaries, took refuge in his twelfth-century training's emphasis on literary commentary and a tropological-moral approach to both written texts and the observed world. He proved reluctant to indulge in natural science. This was largely because his generation of theologians were worried that the divergence between Aristotle and Biblical texts on important matters such as creation, the world-soul, and astrological determinism would lead not only to academic disputes but popular heterodoxy, as demonstrated by the trial of the Amalricians in Paris (1210) and the resulting ban on public lectures on (not as Zahora asserts, the private study of) the libri naturales at the nascent university (83, 100). For Neckam was part of an entire generation of scholars educated according to twelfth-century schemas but wrestling with thirteenth century problems. Similar to other members of Peter the Chanter's school (who were supporters of the ban and well-aware that logic, dialectic and natural philosophy could prove double-edged intellectual weapons), Neckam referred to Aristotle as a textual, not philosophical authority, and "neutered" difficult and unfamiliar texts by ignoring them or reinterpreting them by choosing passages most suitable to his pre-existing intellectual paradigm. This subsumation of the new Aristotle was motivated partly by concerns over the dangers of excessive inquiry and potentially dangerous and unsuitable educational methods practiced in Paris, where students were increasingly seeking education for career advancement rather than for moral transformation.

The threat of another heresy, dualism, would shape the structure and purpose of Neckam's Solatium fidelis anime. Hexaemeral organization enabled the validating, paralleling and correction of the created world (which dualists rejected as completely rather than partially corrupt) with the biblical and salvific written text (Genesis), creating a powerful moral tool for students and pastors (71-2). Neckam then turned to hierarchical organization in his De Natura rerum and Laus sapientiae divine. The latter encyclopedic poem would recur to the twelfth-century natural philosophical tradition of presenting the world as a Neoplatonic chain of being, while offering a direct rebuttal of Catharism in the figure of Faustus the Manichean (77-8). Neckam's personification of dualism in "Faustus" and his reliance on Augustine for anti-Manichean ideas would at first seem to confirm modern scholars' assertion that Paris-trained theologians of Neckam's generation constructed heresy as a patristic paper tiger the better to explicate orthodox beliefs to pastors and ultimately to the laity. However, Zahora notes that Neckam was a far-from-isolated individual with links to the royal court and other intellectuals and may well have based his work on news reports and treatises on contemporary heresy (186, 202-3).

Intended as a moral interpretation of the universe for the spiritual improvement of a clerical and pastorally-orientated audience, Neckam's De natura rerum shared much with other pastoralia (including exegetical and preaching aids) in its compilation, organization, and intended exegetical and homiletical usage. Written as a preface to Neckam's commentary on Ecclesiastes (on the vanity of the world), the De natura rerum also turned to hierarchical organization to order a combination of moralization, theology, natural-philosophical knowledge (plants, animals, stones) and animal tales, along the lines of Gerald of Wales' much-revised and expanded Topography of Ireland, dedicated to Baldwin, archbishop of Canterbury (27). Neckam's efforts would soon be surpassed by those of the Dominicans, who upon settling in Paris, actively engaged with Aristotle's newly translated logical and natural philosophical works and created a different species of encyclopedia. Although these encyclopedias, too, were intended to inform members of the Dominican order in their regional schools and to be used in pastoral work, the "tropological matrix" became only one lens of many through which to view and interpret the natural world. The encyclopedia became a repository of knowledge and wonders which permitted for a new dialogue between Christian doctrine and Aristotelian science.

Unlike later encyclopedic works, which were aimed at a wider body of readers and, on translation into the vernacular, shed their accompanying moralizing and allegorical emphasis (or marginalia) by the fourteenth century, for many modern scholars the De natura rerum remained, like a beached whale, firmly on the early shores of the encyclopedic movement, dismissed as evidence of Neckam's "unscientific" bent rather than revivified in the context of an ocean of contemporary biblical commentaries, treatises, pastoralia, and poems (32, 44, 215, 233). Ironically, essentially twelfth-century works such as Hugh of Saint-Victor's Didascalicon and Neckam's De natura rerum would continue to be copied and utilized far into the thirteenth century, and it would be the entry of the next generation of Paris-trained secular masters into the mendicant orders which would enable the friars to address head-on the very issues which Neckam's generation had dealt with through intellectual elision.

Zahora's monograph is a fine example of research which elicits as many questions as it answers (an excellent quality in this reviewer's opinion). For example, can comparisons be drawn between Neckam's moralist and encyclopedic project in the De natura rerum (and his sermons) and the works of his similarly Paris-educated contemporary Jacques de Vitry? Jacques too, became a canon regular (and associated with many Victorines and Cistercians), and his choice of genre also shifted from the hexaemerally ordered sermones feriales (intended for parish priests to counter dualist heresy) to a massive compilation fusing moral treatise/history/geographical treatise/encyclopedia of which only two books survive (the Historia orientalis and Historia occidentalis). Although Jacques' "history" was a medieval bestseller, it has been omitted from recent works on medieval encyclopedias, despite the fact that both Vincent of Beauvais and Thomas of Cantimpré cited it. Is it any accident that Vincent, after reading Jacques' somewhat cumbersome work, divided his own Speculum maius into the Speculum naturale, Speculum doctrinale and Speculum historiale (and that interestingly, the Speculum historiale was the most popular of the three sections)?

Such questions are meant to reinforce rather than downplay Zahora's rescue of Neckam's work from relative obscurity. Zahora's examination of Neckam's contributions as a writer within his medieval context and his connection of Neckam's world-view to a larger and diverse encyclopedic tradition beneficially force his readers to re-examine how their own conceptual frameworks shape the acquisition, analysis, and use of observed phenomena. His book should become essential reading for anyone interested in Alexander Neckam, the history of encyclopedias, pastoral literature, and the historiographically neglected generation of Paris-trained individuals which enabled the transition between the twelfth-century renaissance and the intellectual contributions of the mendicant orders.