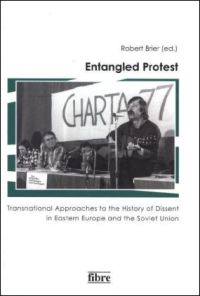 Even before the rise of transnational history it was common knowledge, in scholarship and public perception, that East European dissent was a phenomenon without borders. Thus, it is striking that transnational studies on the history of dissent in the Soviet bloc are rare. Robert Brier's edited volume fills this gap and gathers different case studies on the entanglement of dissent during late socialism. It presents the results of a conference at the German Historical Institute in Warsaw held in 2010.

In his introduction Brier goes well beyond simply reflecting on the background of dissent and its transnational scope, developing a stimulating research agenda. Questioning the simplistic dichotomy between regime and dissent and understanding the latter as shared practices of communication, he follows a revisionist position in the study of socialist societies. Brier leaves behind the teleology of democratization that latently reduces dissidents to a prelude of 1989. Although his impetus lies on personal dissident actors, rather than oppositional structures, this allows for an understanding of dissent as a heterogeneous phenomenon that integrates competing and conflicting ideological standpoints. Therefore it was not the similarity of repression that constituted the transnational character of dissent but the shared practices of empowerment and the solidarity amongst Eastern European dissidents including actors well beyond the Soviet bloc. This second audience of dissidents in the West is the main focus of Brier's interest and thus the volume asks why 'people in the west [would] listen to what dissidents had to say' (13).

Padraic Kenney, probably the first scholar to illuminate the transnational action of dissidence in more detail, comments on Brier's reflections in his contribution. Against the backdrop of his own findings he argues that it is crucial to precisely identify the actors and moments of transnational action to understand its scope. Moreover, he introduces a model of transnational entanglement that differentiates figuratively between the 'electromagnetic force' (45) that binds actors together and the 'radio waves' (51) that transport content without the interaction of transmitters and receivers. His global perspective in particular - beyond Eastern Europe, Kenney draws on Latin America, South Africa and China - offers illuminating insights into the mechanisms and limitations of transnational action. Given the changing quality of media and technology, Kenney underlines the importance of content and situational context for studying transnational history.

The case studies in this volume approach the transnational history of dissent from three perspectives. A first section deals with mutual contacts and intermediaries between both East and West and dissidents in different socialist countries. Julia Metger, for instance, scrutinizes the role of Western newspaper correspondents in Moscow and their own contribution to dissent. By building personal networks amongst dissidents and closely following their activities, correspondents became actors, both in the Soviet Union and the Western public sphere. The second section on human rights and détente examines dissent as a topic of diplomatic and political relations. Both Wanda Jarząbek and Bent Boel argue that the influence of Western institutions, such as Western diplomacy during the CSCE-process or Western European social democrats in contact with the ruling socialist parties, opened up new possibilities for dissidents.

Similarly, the articles of the third section take external factors into account. Kim Christiaens and Idesbald Goddeeris highlight the parallel and yet disentangled Belgian solidarity movements with Poland and Nicaragua during the early 1980s. Like Metger they stress the twofold role of intermediaries and the wide influence dissidents had on their Western partners. Kacper Szulecki demonstrates how the content of protest evolved through transnational contacts. Polish peace activists of Wolność i Pokój, for instance, transformed the pacifist beliefs of their Hungarian rolemodels and eventually formed a human rights pressure group. A similar transcending of borders can be found in Holger Nehring's study with West and East German peace and environmental movements.

Making use of the contingency of dissent in Eastern Europe, articles like Metger's understand dissent as a concept produced in transnational negotiation. In other words, dissidents in other socialist countries or Western actors were not only helpful for dissident activities, but contributed to the shaping of dissent itself. This insight will prove most fruitful in further research and help to reexamine Western scholarship on dissent since the 1970s. Given the intensive contacts of those early scholars with dissidents in Poland, Czechoslovakia or the Soviet Union, their writings are also part of the transnational history of dissent.

The volume underlines the fact that a feeling of transnational solidarity brought together highly heterogeneous actors from different countries. Some articles pursue this in detail and disclose the deep impact of solidarity as a concept in the social movements of the 1980s, both in the East and West. Surely it will be worthwhile to investigate further these matters, elaborating especially on the concept of solidarity itself and the transgression of regional and political contexts.

Several articles address the question of how to gather sources for transnational histories of dissent. For instance, Kenney and Tomáš Vilímek make use of oral history, yet with different approaches. Whereas Kenney puts his interviewees into perspective and understands their information as simple suggestions, Vilímek follows their narrative closely and brings to the fore some of the obvious methodological problems of writing the history of dissent. Given the various conflicts about the legacy of dissent and the ambiguous appraisal of the dissidents' efforts in present day Central and Eastern Europe, it remains crucial for the historian to keep his or her distance from contemporary witnesses and their present day interpretations.

The volume under review elucidates impressively that dissent in Eastern Europe cannot be understood without careful attention to Western and global entanglements. The study of dissent and opposition will benefit from this methodological inspiration. Although it was not the explicit focus of the editor's introduction or the respective chapters, a global understanding of transnational processes shines through the entire volume. It will be worth developing this further and approaching the global history of dissent both with comparative and entangled methodological interests.