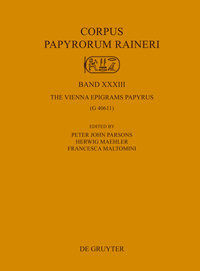 Although in the appearance of a relatively slim volume, the edition of this papyrus comes as an eagerly anticipated publication for every scholar interested in the complex phenomenon (with both bibliological and literary implications) of the creation of epigrammatic anthologies. The timing could not have been better: this important and already very discussed manuscript [1] becomes available for the first time in full to the scholarly audience in a period when the discourse about the origins, the development, the shape and the genre of Greek literary anthologies has been revived by newly published papyri with similar features [2] and by an attentive re-examination of the old material. [3] A round table on the "Transmissions and contexts of epigrammatic literature in the light of P.Vindob. G 40611", organized in Pisa with the participation of the editors and of Guido Bastianini, Lucia Floridi and Cornelia Römer, functioned as a welcome complement to the volume.

A short introduction presents the main physical information on the papyrus and his content, and offers a general contextualization of this manuscript in the corpus of the already known Greek literary anthologies (especially those featuring epigrams). The critical edition of the text is the core of the volume: to every column a chapter is dedicated, providing diplomatic transcription, edition, tentative translation and a line by line commentary. The volume is enriched by 11 plates with multi-spectral new photographs of all the fragments. Beautifully produced, the volume is accompanied by an Errata et Corrigenda sheet which emends the few printing errors; I can add "hereself" = "herself" at p. 28, line 5 of the translation.

The papyrus is the surviving part of a roll, preserved because used as a cartonnage for a mummy mask, like P. Mil.Vogl. VIII 309, a selection of Posidippean epigrams. Of unknown provenance (documents found in the same cartonnage point to the Arsinoite nome, but an Alexandrian origin would be plausible as well: 4-5), the roll dates, on documentary and paleographical grounds, to the 3rd part of the 3rd century BC. On the recto seven columns are legible; two appear on the verso; six little fragments (G40611a) have been assembled to form two more selides on the recto and one on the verso (see 104, 110).

The volumen was used to list a series of incipit of epigrams (many of the first verses are not even quoted in full, just by the first few words), divided into sections well marked by headings: at the top of the first selis, most probably the beginning of the entire roll, the heading "Book I" (τὰ ἐπιζητούμενα τῶν ἐπιγραμμάτων ἐν τῆι ᾱ βύβλωι) refers to the incipits registered at coll. i-iv; "Book II" (ἐν τῆι β βύβλωι), at the top of the fifth column, refers to the incipits of coll. v-vii. Another heading is preserved, "Book IV" (ἐν τῆι δ βύβλωι), at the top of fr. a col. ii (possibly = col. xi or xii of the roll). Every line has a new incipit, preceded by a paragraphos and followed by the number of verses of the epigram, according to the same principles used by Callimachus in his Pinakes (ἀρχή of the poem, total number of στíχοι, number of the book the poem belongs to, cf. fr. 433-434 Pfeiffer), except the name of the author (or authors). The extant incipits are 226, selected from at least four books of an unspecified collection: since the average length of an epigram (as marked) is 4-6 verses, and in average the length of a roll (= book) was about 1000 lines, the editors calculate (11) that the original collection would have had ca. 200 epigrams per book: the anthologist is thus picking a epigram every four, downscaling the collection of four books (probably the same size of Meleager's Stephanos) into an anthology of only one book = one roll. The papyrus is a private copy showing sign of checking and reworking: two hands have been recognized by H. Harrauer, one for coll. i-iv (including stichometric totals at the foot of the column; end of col. ii is not legible, but the figure there ought to be 22), a 2nd one for the following columns and fragment a. Some of the incipits of Book I have been bracketed, as if they were meant to be cancelled in an afterthought.

Most of the epigrams (86% of the total, see also p. 61) count 4 to 6 lines, and, if beginning with a hexameter, they are most probably in elegiac couplets, like the majority of the Hellenistic epigrams. However, this selection differs dramatically from the Milan Posidippus and from other known anthologies on papyrus, since epigrams in iambic and lyric metre are also numerous, especially in col. vi and fr. a col. ii (see 14); longer pieces, varying from 8 to an exceptional 52 lines, are also occasionally present: although epigrammata longa are meant to be a product of later centuries, [4] sporadically we find also in the 3rd to 2nd cent. BC epigraphic epitaphs of 15-20 lines, while the famous elegy in "praise of Halikarnassos", dating probably to the 1st cent. BC, counts 61 lines; the editors (16) suggest also a parallel with the programmatic piece opening Meleager's Garland, or with a piece possibly closing an epigrammatic collection (Posid. 118 A.-B.).

The purpose of the list of incipit is unknown, as is the identity of the author (or the authors) of the epigrams selectioned. Other lists of incipits [5], like those of lyric poems preserved in P.Mich. inv. 3498R (2nd cent. BC), or the incipits of epigrams in P.Oxy. LIV 3724 (1st cent. AD) may be preliminary sketches for an anthology of private/working use: the Vienna papyrus had likely a similar function, as it is not comparable to other known lists believed to be rough school exercises (like SH 976, ostrakon), or, at the other end of the spectrum, bibliographic instruments penned by professional scribes (like P.Flor. 317R, 2nd-3rd cent. AD). The stichometry is not only an instrument to calculate the payment of a professional scribe, but also a tool to assesses the length of a text for editorial purposes, or a way to check the integrity of a copy (cf. in the P.Mil.Vogl. 309 the dot every 10 lines and totals at the end of every thematic sections). In the Vienna papyrus, the note at col. i 1-2: τὰ ἐπιζητούμενα τῶν ἐπιγραμμάτων ἐν τῆι ᾱ βύβλωι indicates that the incipit belongs to poems "sought out", "wanted" (for other example of desiderata list see 11). More puzzling is the unparalleled marginal ευ (see 9-10) written to the left of some of the epigrams, apparently by the same hand of col. i-iv: according to Harrauer, it could be a sign of approval (εὖ "good") or an abbreviation for εὗρον ("I've found it", with reference to τὰ ἐπιζητούμενα: the lack of a sign of abbreviation, like in the του of the Milan Posidippus, is not surprising, as there is no uniformity in signs in ancient literary papyri). In either case, the meaning is not clear: if the incipits are themselves a selection from a bigger book, the mark "good" would be a hint of a further selection of the best epigrams among the already chosen ones? And if the incipits are a list of desiderata already found (the copist knows the number of lines of each epigram and the exact book in which they are included), what would "εὗρον" mean? The editors cautiously propose the hypothesis (11) that ἐπιζητούμενα signifies "investigated, researched", possibly in order to establish the authorship of the epigram ("found" in some cases) - which implies that the collection in at least four books in front of our selector(s) was composed by epigrams of mixed authors with no individual attribution (the ghost of the Soros, according to Reitzenstein a collection of epigrams by Asclepiades, Hedylus and Posidippus not individually attributed, come to mind: see 12). The nature of the epigrammatic four-books collection which was a model for the copists of P.Vindob. remains until now impossible to determine, therefore we cannot establish if it was a mono-authorial collection or a mixed authors anthology (with marked or unmarked attribution of the individual epigrams): no one of the listed incipits can be identified with certainty with already known epigrams, with the possible exception of i 14, corresponding to the incipit of Asclepiades A.P. 12.46, and of ii 10, partially overlapping with anon. A.P. 14.106: caution is necessary, as similar or identical beginnings could belong to different epigrams, one being a parody of, or a variation on the other (see 16-17). Another question raised by this papyrus is the ratio of the arrangement of the epigrams (both in the model four-book collection and in the Vienna selection): alphabetic disposition is excluded; only a cluster of incipits sharing the same key-word kalos can be spotted at ll. vi 13,15,16 (88-89), too little to affirm that the main criterion for the disposition of the epigrams was variation on the same subject.

One of the most remarkable feature of this roll is the apparent prevalence of some themes (skoptic, symposiastic, erotic: see 15) over others subjects and epigrammatic sub-genres (anathematic, encomiastic, funerary), which are more familiar to modern scholars through the Greek Anthology and papyrus finds. Epigram is one of the most chameleonic literary genres and can be easily adapted to become a miniature form of virtually every other literary genre (encomium, epinikion, hymn, etc.); epigram functioned as a highly experimental field for Hellenistic poets to practise the Kreuzung der Gattungen in smaller-scale compositions. While symposiastic and erotic themes (also connected with symposion) lurking in these incipits are already widely present in literary epigrams of the 3rd cent. BC (actually, some, like the ripeness of the lover, at vi 1, are as old as Archilochus 196a West: see 81), Lucia Floridi [6] has pointed out that some skoptic subjects which, until now, were believed to be invented or at least popularized by 1st-2nd cent. AD authors like Lucillius and Nicarchus (e.g. death by hanging, jokes on physical disabilities, farting, satire on professional categories such as doctors or seers, see vi 11 at p. 87) can already be spotted in this list: this unique papyrus therefore challenges our view of 3rd cent. BC epigram, heavily influenced by the selection made of Meleager, and opens a new scenario in which skoptic imagery and themes played a relevant role also in the early Hellenistic period. [7]

Even this short summary makes clear that this bewildering papyrus offers to philologists and historians of Classical literature more questions than answers: we are watching over the shoulder of the compiler of an anthology, but many pieces of the picture are still missing. It is easy to foresee that the edition of the Vienna roll, like that of the Milan Posidippus, even though reduced to the bones of a few incipits, will soon trigger a long series of studies, either centered on wider issues, like the re-assessment of epigrammatic sub-genres in the 3rd cent. BC and the selection and disposition process that led to the creation of the early anthologies, [8] or on the discussion of individual lines. My first wish is that the contributions of the excellent Pisa round table will be published soon, so that they could be a starting point for further research on this unique text.

[1] See v-vi and 1 for the adventurous conservation and editorial history of the papyrus. After its presentation by H. Harrauer: Epigrammincipit auf einem Papyrus aus dem 3. Jh. v. Chr. P. Vindob. G 40611: ein Vorbericht, in Proceedings of the XVI Int. Congress of Papyrology, Chico 1981, 49-53, the papyrus attracted the attention of every scholar dealing with epigrammatic collections, notably A. Cameron: The Greek Anthology from Meleager to Planudes, Oxford 1993, 9-10 and L. Argentieri: Epigramma e libro. Morfologia delle raccolte epigrammatiche premeleagree, ZPE 121 (1998), 1-20 (12-13); P.J. Parsons, one of the editors, offered a foretaste of the material in Callimachus and the Hellenistic epigram, in: Callimaque, Entretiens de la Fondation Hardt XLVIII (Geneva 2002), 99-141 (118-120).

[5] For a full list see 7-8. The issue has been thoroughly discussed by G. Bastianini: Osservazioni bibliologiche su papiri epigrammatici, and P.J. Parsons: Incipit di epigrammi su papiro, during the Pisa round table.

[7] Floridi remarks that some rare examples of skoptic poems are already known in the 3rd cent. BC, like, e.g., the epigram attributed to Hedylus in Athen 8.344f, or Posidippus 121 A.-B.