Vesa Vahtikari: Tragedy Performances outside Athens in the Late Fifth and the Fourth Centuries BC 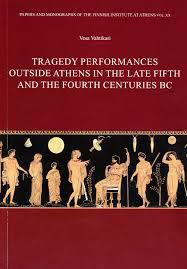 This book is an essentially unrevised version of the author's dissertation on just what the title describes - "tragedy performances outside Athens in the late fifth and the fourth centuries B.C." Yet Vahtikari seems to be most interested in mining the evidence for reperformances of Athenian plays outside of Athens (an immensely popular topic in recent years). We find discussions of a few instances of putative non-Athenian premieres (e.g. Aeschylus' Aetnaeae; Euripides' Archelaus), but this part of the dossier is largely limited to plays by classical tragedy's "big three": Aeschylus, Sophocles, and Euripides.

Chapters I ("Introduction") and II ("Evidence") introduce the reader to the nature and categories of evidence that will be brought to bear on the plays discussed severally in Chapters III, IV and Appendix I. This evidence is divided into "documentary and literary sources" (inscriptions, papyri, manuscripts, testimonia), "evidence of vases," "[internal] evidence of the tragic texts," "intertextual evidence" (that is, evidence mostly from comedies and other tragedies) and the "evidence of theatre buildings."

It is useful to have all of this kind of information in one place. The bibliography is extensive (though not quite up to date - it is conspicuously missing, e.g., B.W. Millis and S.D. Olson's Inscriptional Records for the Dramatic Festivals in Athens, which appeared in 2012). The ancient sources cited are also copious, perhaps even too much so: the tendency towards long lists does not make for easy reading (e.g. page 60 is entirely taken up by prosified lists of comic titles that suggest a parody of tragedy).

In general the author leans towards a light quantitative analysis, and throughout the book we are showered with basic statistics (about how often Aristotle quotes a particular tragedian, or how many times a given play might be depicted on surviving vases). The distributional maps (of, e.g., excavated theaters, or provenanced vases) are useful, though it would have been helpful at many points to have the evidence presented by means of (still more) charts and tables rather than by dense catalogues of data molded into paragraph form.

The wealth of material cited in these chapters (as throughout) means that the text is also given to a number of digressions - pages 36-44, for example, consist in a typology of histrionic gestures on vases. A great deal of credence is placed in late and tendentious sources, such as Plutarch and Athenaeus. But despite the methodological problems (and the problematic nature of the ancient evidence), Vahtikari's decision to include all of this information does make for an enormously rich compendium of indirect evidence for the plays, and for ancient theatrical culture generally.

Chapters III, IV and Appendix I treat, respectively "Known theatre performances outside Athens, "Some tragedies which were very probably performed outside Athens" and "Some tragedies which probably or possibly performed outside Athens." These sections are organized alphabetically by play. Vahtikari is aware of the confusion that we suffer due to multiple plays of the same name (as ancient authors, too, recognized, antiquity saw many a Medea and Oedipus), but on this point it often seems safe to assume that the most famous fifth-century treatment became the 'standard' one.

Chapter III also includes an excursus on the evidence for theatrical activity in the circle of Alexander the Great, but on the whole Macedon does not seem to be given its fair share of discussion, given the stated aim of the book. (Liapis' hypothesis that the Rhesus was written by the actor Neoptolemus certainly deserved more than a footnote.) This is a point on which I really missed more substantive discussion (not theoretical discussion necessarily, but at least conceptual discussion). Scholars such as Le Guen, Moloney and Revermann have done much to show that Macedon played a crucial role in the early and wide spread of Attic tragedy throughout the oikoumenē, and in a book about performances of Attic tragedy outside of Athens that point deserves real exploration.

In a way, the book functions along the model of a news aggregator: it collects enormous amounts of information that is already 'out there' - the backmatter (which includes three enormous appendices) runs to about 150 pages. Vahtikari runs through the opinions of numerous other scholars, but draws few new (or confident or bold) conclusions. Those which he does venture will not come as news to anyone familiar with this material: reperformance culture was probably lively; new productions of old plays most likely contributed to the eventual survival of the plays that we do still have; Euripides' work was especially popular in these years. The section on 214-7 "How did the classics become classics" poses a hugely interesting question, but doesn't offer much in the way of a new answer.

At the end of the day this book is really a published dissertation - an excellent and impressive dissertation, but one that would have profited from a rethought organizational structure, some serious pruning, and a more stringent peer review process. It is odd that none of the Greek or Latin is translated, but that very basic concepts (about stage machinery, or the dramatis personae of well-known plays) are explained. The book is most valuable for the masses of information that Vahtikari has managed to collect in it, and the roughly 20 pages of full-color plates of vases (likely) depicting scenes of tragic performance are alone a splendid resource. The collections of testimonia for individual plays are also useful to have together, though in no single case is it a substitute for the standard reference works (such as TrGF and separate editions of the texts).

Given the nature of the evidence and its organization here, the book would best be described as an account of the indirect tradition for Athenian tragic productions, mostly from the fifth century to the era of Alexander. Few will want to read it straight through, but on the whole (and despite some peculiar presentation choices) it has the potential to serve as a useful guide to important points of ancient Greek theatrical culture and Athenian tragedy's early reception.