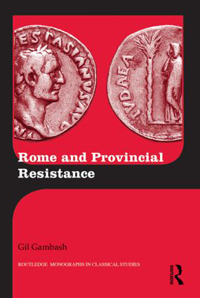 This volume addresses the topic of resistance to Roman imperial rule and seeks to set this in the context of the recent writings that have addressed Roman imperialism. Over the past forty-five years there has been an increasing focus on how provincial populations might have resisted the expansion of imperial Rome. This has created a body of work to counter an earlier conceptual bias towards the assimilation and incorporation of indigenous people within the empire. [1] Gambash is a Lecturer at the Department of Maritime Civilizations at the University of Haifa in Israel. His book seeks to address and analyse patterns in the response of the Roman state to local resistance, concentrating on the decisions made by military and administrative officials during the Principate (7-10). He seeks to explore the extent to which Rome may have depended upon force to create imperial order and the degree to which particular local populations were willing and cooperative in the process of empire building (2). In these terms, the book focuses on the perspective of the Roman governing classes, addressing the motivations and judgements of decision-makers within the military and administrative organisation of the empire, from the emperor to the provincial governor. It addresses the extent to which it is possible to establish how decisions were made and the ensuing negotiations that promoted imperial cooperation with local populations. A consistent undercurrent is provided by Gambash's attempt to navigate between two extreme positions in the assessment of the Roman empire - Rome as belligerent and violent and the contrasting image of a beneficial and assimilative empire (2-3). In identifying this debate, Gambash draws upon Mary Beard's claim that David Mattingly's account of Roman Britain effectively defines Rome as 'bad'. [2] Gambash wishes to navigate between accounts that take simplistic oppositional positions, although it appears to this reviewer that the Roman empire described in this account is primarily well-motivated and strategic.

The book has an Introduction, five chapters and Conclusion. It draws upon materials from across the Roman empire, including case studies of the suppression of revolts in Africa, Britain, Germany and Judea. The Introduction (1-19) outlines the approach and methods adopted in the book. The first chapter, 'Tension Management' (20-61), explores the means available to Roman officials to mitigate local tensions in order to nip frustrations in the bud. Chapter Two, 'Handling Revolt' (62-98), examines cases in which the Roman government embarked on the subjugation of rebellious indigenous populations, while Chapter three, 'Official Appointments' (99-123), explores how local realities in particular provinces influenced the official appointments made by the central government. Chapter Four, 'Commemoration' (124-143), considers how victories over rebellious provincials were apparently celebrated on a modest scale in comparison to the grander commemoration of achievements beyond the imperial frontiers. Chapter Five focuses on the well-attested and particularly significant events of 'The Jewish Revolt' (144-179) that witnessed 'the uncharacteristically aggressive Roman treatment of the Jews' (144). Gambash argues that the evidence for this particularly violent event serves to highlight Rome's departure from its 'habitual creeds' of the 'regular conciliatory approach toward restless local populations' (144). The Conclusion (180-195) contains a relatively brief summary of the main points outlined in the book, re-emphasising Rome's (apparently) conciliatory approach to the settling of local acts of armed resistance and disruption.

The materials on which this study is based require that attention is focused on the decisions made by imperial officials in response to problems in the provinces. There is no way to find 'native' voices, since the accounts attributed by mediterranean-based classical authors to non-Roman rebels provide no reliable information about their motivations (21).

Gambash's approach exploits the available classical textual material but inevitably provides a one-sided picture of the structure of empire. The elite groups in the provinces often directly benefited from imperial incorporation, [3] which means that documenting the relationship between imperial officials and provincial elites is likely to project the spread of empire as a largely consensual process. Other recent accounts of the Roman empire take radically different approaches that tend to emphasise the potential negative connotations of Roman rule. [4] Although Gambash emphasises that his account seeks to find a middle ground between interpretations of imperial Rome as being concerned with peace and order, and oppositional works that seek to address the belligerence and brutality of imperial rule (2-3, 180), he emphasises in his conclusion that:

'the general tendency of the Roman administration during the first two centuries CE was intended to keep the provinces peaceful, and that such a policy was implemented through practical measures that, at root, consisted of the prompt establishment of trust in the local populations' (181).

By seeking to explore the ways that the Roman ruling elite aimed to create, manage and perpetuate imperial order, Gambash appears to be taking one side in a debate that originally involved a multitude of stakeholders, the vast majority of whom have no voice in the recorded texts. A more strictly archaeological focus upon the underclasses subjected to imperial rule across the empire tends to suggest a different balance of interpretation, as does a contemplation of the forced incorporation of new peoples and territories into the empire.

The natural skepticism of certain modern academics about the writings of imperial administrators addressing the supposed benefits of empire to subjected peoples needs to be addressed. [5] Britain is not the only western nation that drew upon classical Rome in association with its imperial activities during the nineteenth and early twentieth centuries, although accounts written in the United Kingdom have increasingly stressed the biases inherent in Victorian and Edwardian writings about the Roman empire. Some authors feel that this requires an equally suspicious view of the activities and the stated motivations of Roman administrators.

My preferred approach in the search for a balanced position between the ideas of 'good' and 'bad' Rome is to emphasise the contradictions inherent in imperial rule and the ways in which cooperation and resistance were not necessarily entirely distinct acts. [6] One key issue here is the extent to which the classical world is constantly remade in the image of the state of continuous crisis in which we find ourselves in our contemporary lives. Our views of the relative benefits and negatives of Roman imperial rule may in part depend on how we view our own place in the world and the security of the regions and countries of which we form part. The imposition or the management of imperial oppression may seem a more positive concept in certain national research traditions than in others. The consideration of the balance between the degree to which Rome actively and violently coerced local populations or aimed to create an accommodating atmosphere across the provinces is likely to remain a very lively area of discussion. Gambash's volume clearly makes a valuable contribution to this debate.

[1] Two articles published by Steve Dyson during the 1970s were particularly important formative accounts of resistance, as emphasised by Gambash (1).