Stephen F. Dale: The Garden of the Eight Paradises. Bābur and the Culture of Empire in Central Asia, Afghanistan and India (1483-1530), Leiden / Boston: Brill 2004 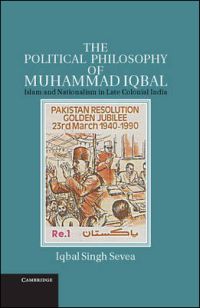 The book by Iqbal Singh Sevea which is under review here reflects a remarkable surge of interest on the part of western-based academics in recent years in rewriting the life and times of an active man in many diverse fields who died nearly 80 years ago. For decades after the divide of British India Sir Muhammad Iqbal was either admired solely as one of South Asia's greatest poets or he was dragged into the fight of interpretive authority over South Asian Muslims between Pakistan and India. Recent research [1] now reflects the diverse interests and activities of this poet, barrister, philosopher, academic, educationalist and politician. The challenge in doing so lies - as Sevea also remarks in his introduction (24-25) - in Iqbal's poetic language that leaves space for different interpretations, his usage of political concepts differing from their comprehension by his contemporaries, and in the wide range of diverse groups from socialists to Islamists who all claimed the support of Iqbal. In his study, Sevea draws attention to Iqbal's political philosophy and his political engagement by concentrating mainly on the intellectual's ideas about the compatibility of Islam and modernity as well as his reformulation of the nation and nationhood concepts.

Iqbal Singh Sevea, a scholar of history at the University of North Carolina at Chapel Hill who has for many years been engaged in the study of Muslim life in South and Southeast Asia in the late 19th and early 20th centuries, also mentions in his dedication his personal relation to the study: his grandfather named him after the great poet. The monograph of around 200 pages is divided into an introduction, a contextualization and four main chapters as well as a conclusion. Each chapter - except the contextualizing chapter - is initiated by a short poem by Mohammad Iqbal and closes with a short conclusion.

The introduction provides firstly the setting of Muslim political discourse presenting different tendencies like the Deobandi, Ahl-i-Hadith and Barelwi Movements, the Ahmadiyya, the Modernists like Sayyid Ahmad Khan and the Khilafat Movement of 1919-1924. That is followed secondly by a short biography of Iqbal also highlighting his scholarly and not only his poetic work and presenting different influences, i.e. his study times in Britain and Germany from 1905-07. Finally Sevea defines his objectives and gives an outline to the chapters. His main aim in this study is to situate Muhammad Iqbal within the socio-political (including the religious) discourse and the intellectual milieu of his time and to study his "political discourse in connection with his religious discourse" (30).

In many works Muhammad Iqbal and his writings are seen in the light of the events happening nine years after his death, the establishment of Pakistan. To avoid such anticipations, Sevea starts his study with a concise contextualizing chapter entitled "Muslim Political Discourse circa 1857-1940". From the uprising of 1857 up to the Lahore Resolution of 1940, Sevea shows that there did not exist one single political tradition in Indian Islam. Quite the contrary, the very basic question of the relation between religion and politics led to vibrant debates and diverse stances. Furthermore, Sevea uses the period highlighted here to demonstrate how traditional religious authorities were challenged by a number of intellectuals who also started "interpreting Islamic sources and publishing works on Islam" (61).

His discussion of Muslim intellectuals leads Sevea into his second chapter "'Mera Payam Aur Hai' - Iqbal's Role as an Intellectual and Poet". Heavily depending on Gramsci's description of an intellectual he locates Iqbal within the sphere of modern Islamic thought. Emphasis is laid on two challenges influencing Iqbal's thought: the trope of Muslim decline, and the claim of traditional religious authorities to have the sole right to interpret religious sources and colonial hegemony. In the case of the latter Sevea could have stressed more one of Iqbal's main contradictions: on the one hand the resistance of colonial hegemony which he saw as a main obstacle to Muslim empowerment and on the other hand highlighting the importance of his study days in Britain and accepting the knighthood.

In "Reconstruction of Islam", Sevea concentrates on Iqbal's comprehension of Islam as a complete ideology: "[Iqbal] believed that amongst the religious systems in the world, Islam was the best suited for the organization of life as it applied to every aspect of the life of the individual and society" (113). With the help of many textual examples Sevea illustrates Iqbal's idea of Islam as an empowering ideology. Very interesting are also Sevea's connections to other intellectuals who claimed Iqbal's influence, such as Abul Ala Maududi.

Taking this understanding of Islam as a complete ideology, Sevea works in the next chapter "Rejecting Nationalism, Relocating the Nation" on Iqbal's views on the compatibility of Islam and western ideologies, mainly nationalism. As Iqbal is seen sometimes as the ideological precursor for or even the chief ideologist of the idea of Pakistan as a Muslim nation-state, Sevea now comes to a critical area. In his understanding Iqbal rejected the compatibility of Islam and nationalism and therefore rejected "the idea of the mono-cultural and territorially defined nation-state" (162). Sevea argues that Iqbal considered the modern nation-state to be atheistic whereas an Islamic nation would be religious and was not territorial limited. Impressively Sevea summarizes the debate between Iqbal and Maulana Madani on the translation of "nation" and their understandings of the terms "qawm" (nation in the territorial sense) and "millat" (nation as a social and political grouping).

In a last step, Sevea clearly summarizes in "Development of the Nation" the political debates of the 1930s over the reorganization of colonial India once it would be independent. Sevea emphasizes Iqbal's influence on different groups within the debate, but at the same time carefully tries not to put him into one certain camp.

Iqbal Singh Sevea perfectly fulfilled his task to shed light on Muhammad Iqbal's often neglected political philosophy and to locate it within the socio-political debates and the intellectual milieu of the transition period between the 1857 uprising and the actual process of decolonization in the late 1940s. He does so in a very concise and well readable manner basing his findings on numerous writings of Muhammad Iqbal as well as on comparisons to his contemporaries. Sevea picks up different strings - like the debate of Iqbal and Madani on "qawm and millat" - from time to time and connects them to a synopsis of Iqbal's political thought: the rejection of the compatibility of Islam as a complete ideology with western atheistic ideologies such as nationalism as well as his highlighting of the millat as a nation of religious affinity towards a social and political empowerment. Sevea's manner of synthesizing Iqbal's thoughts and setting them into context perfectly fits his objectives and the book's structure. Nevertheless, the complete absence in his book of a chapter on methodological or theorizing framework is striking. At times he depends on conceptual writing such as Gramsci's definition of an "intellectual" though he does so a little unilaterally and he seems to go over the target when setting Iqbal in relation to Trotsky, Gramsci and the later French theorists such as Fanon, Memmi or Sartre.