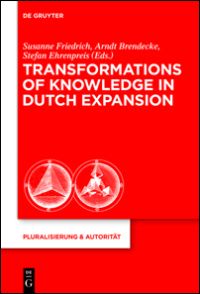 Historians of knowledge today are much interested in spaces and flows. They study borderlands, contact zones, travelling, circulation, accumulation and the relations between local and globalized knowledge. Knowledge has become a geographical concept in many ways. The book edited by Susanne Friedrich, Arndt Brendecke and Stefan Ehrenpreis fits neatly into this expansive line of research, but also adds a promising new perspective. The volume is an outgrowth of an international conference held at the University of Munich in 2010. The original angle explored by the authors consists in the focus on "transformations" of knowledge. "Transformations" of knowledge embrace the whole spectrum of great and small processes of translation, adaptation, appropriation and recontextualisation which occur as artefacts, texts and meanings travel through space and across cultural, linguistic and social boundaries (5-6, 10-11). The editors visualize the concept by comparing 'transformations' to constant changes in the "ship" of knowledge as it moves from place to place. Its broadness, openness and lack of precision should in their view be seen as assets rather than drawbacks, because those very qualities allow historians to pay close attention to the myriad of small, discrete, almost invisible actions and thought processes that were going on in day-to-day reality. Using the term "transformations" would also have the advantage of offering a route to steer clear of the Eurocentrism that lurks in the background as soon as researchers start to talk about "knowledge".

The subject of this book are "transformations of knowledge" in the context of Dutch expansion in the seventeenth and eighteenth centuries. Dutch expansion is largely identified with the activities of the big trading companies, the Dutch East-India Company (VOC) and Dutch West-India Company (WIC). In line with insights from recent research, the editors emphasize that circulation of knowledge in the framework of these companies was not only driven by private initiative of their employees but also resulted from operational needs of the organizations themselves.

The subjects of the nine essays included in this volume show a considerable variation by geographic focus, time period and field of knowledge. While Lissa Roberts analyzes accumulation of objects and know-how in a particular site in Asia, the VOC factory in Nagasaki, Japan, between c. 1640 and 1850, Benjamin Schmidt examines the 'repackaging' and selling of geographic knowledge from the non-European world in the Netherlands about 1700. Stefan Ehrenpreis and Michiel van Groesen discuss representations of Brazil during and after the period of Dutch rule between 1630 and 1654. Botanical knowledge in Japan, the Netherlands and Malabar in the seventeenth and eighteenth centuries is compared in essays by Mina Ishizu & Simona Valeriani and by Anjana Singh. Anke Fischer-Kattner analyzes an account written by a Frenchman François Le Vaillant on his travels into the interior of the Dutch Cape Colony in the 1780s and Bettina Noak looks at the attitudes to foreign cultures in Asia in the work of VOC surgeon Wouter Schouten in the late seventeenth century. The volume concludes with an essay by Peter Rietbergen which scrutinizes the relationship between perceptions of Asian societies in travelogues of VOC employees and received Biblical wisdom between 1600 and 1800.

The value of these essays lies not so much in the presentation of startling new empirical findings but rather in the exploration of new ways of reading and looking at familiar sources. The selection of subjects covered in this volume has, to be honest, a slightly traditional air. Equating Dutch expansion with the activities of the VOC and WIC, the editors have missed the opportunity to examine transformations of knowledge going on outside the orbit of the trading companies. The networks of the Dutch Atlantic in the seventeenth and eighteenth centuries ranged after all much more widely and deeply than the mere institutional structures of the West-India Company. At a conceptual level, however, the volume is truly groundbreaking. 'Transformation of knowledge' proves to be a very flexible and malleable notion indeed. The authors use it in many different ways and at many different scales in space and time. Schmidt, for example, conceives "transformations" as transfers of an image, idea or motif from medium to medium in a particular cultural context. Ehrenpreis traces the communication of images from one centre of accumulation to another. For Van Groesen, "transformations" are changes in interpretation of images and descriptions over time. Fischer-Kattner dissects the practices by which an individual learned traveler proceeded to 'transform' existing knowledge. Ishizu and Valeriani deconstruct the ways in which knowledge was rearranged and reclassified over time in different societies.

What all essays have in common, is that the authors concentrate at describing how transformations occurred rather than analyzing why they took place in the way they did. If contributors do offer an explanation for a transformation of knowledge, the focus is on circumstances specific to a particular time, place or individual rather than on underlying general factors. Granted that the concept clearly has its uses as a browser to hoover up a mass of historical facts, it may still be asked whether transformations show recurrent patterns across time, place or field of knowledge. Can "transformations of knowledge" become more than a powerful heuristic device? In another respect, the possibilities of the concept likewise seem to be less fully explored than the arguments put forward in the introduction suggest. Cautionary remarks of the editors about 'Eurocentrism' notwithstanding, most of the contributions in the volume only study transformations of knowledge flowing from the outer-European world to Europe, not the other way around. Exceptions are the essays by Ishizu & Valeriani and Singh, which take a more comprehensive, multi-directional perspective. Apart from these caveats, however, I am convinced that this book makes an innovative and important contribution to the spatial approach in the history of knowledge.