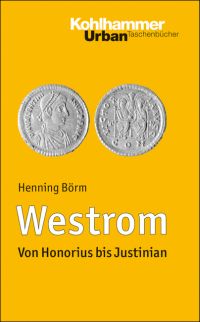 Over the past decade there has been no shortage of monographs dealing with the end of Rome's Empire in its western provinces. Contrary to studies focussing on the social and religious transformation of 'Late Antiquity', this recent surge has returned to the perennial question - Gibbon's problem as it were - of what lay at the heart of Rome's 'Fall'. In this surprisingly pocket-sized, but very nuanced book Henning Börm adds his voice to the debate.

Börm positions himself in the field (9-13), after which he presents the reader with a brief outline of the sources for this period (14-20). Chapter 3 presents the reader with an overview of imperial history from the Antonines to the death of Theodosius I in 395 (21-38). There are also thematic chapters dedicated to the court (140-148), imperial administration (149-161), the western army (with special emphasis on its 'barbarian' components) (157-164), the economy (166-175) and religious developments (176-186). As demonstrated in the subtitle, however, the crux of Börm's work lies in a reconstruction of political events from the late fourth to mid sixth century (36-139).

Disregarding a few out-dated opinions, most scholars agree that Westrom never existed as a separate state. Even when there were multiple emperors reigning with their respective courts, administrations and armies, all elites subscribed to the constitutional theory of a single Roman Empire (39). Thus Börm aptly remarks that no one ever called themselves 'West-Roman' during the period under investigation (10). Instead, he focusses on the various western provinces that were still controlled by a separate court in Italy at the start of the fifth century. Börm does not subscribe to theories of 'decadence' or 'inevitable downfall', but rather which mechanism and structures allowed the development of the process which we now call "the fall of the 'western' Roman empire". In Börm's terms: at what point did the Machtverlust of the western imperial government become irreversible?

A first positive feature is that Börm, building on previous work, takes his narrative all the way to the reign of Constans II (641-668). Indeed, the very fact that even as late as 597 the emperor Mauricius designated his younger son Tiberius as emperor for the west, or exarchs such as Gregory (in Africa) and Olympius (in Italy) attempted to usurp imperial power in the mid-seventh century, are healthy reminders that Westrom remained a possibility long after the death of Julius Nepos in 480 - albeit an increasingly fleeting one that never materialized. Most importantly, Börm firmly chooses to centre his analysis on the western Roman elites (emperors, court and commanders). This choice is far from revolutionary, but in most recent discussions has often been relegated in favour of 'Roman-barbarian' conflicts. Instead, Börm argues that what ultimately caused the disintegration of the western Roman governmental apparatus, previously uniting territories as far apart as Britain, Mauretania and Dalmatia, was not exogenous shock but power struggles at the center between various factions (without resorting to out-dated labels such as 'pro'- or 'anti-barbarian') (146-148).

Indeed, the most original contribution of this book pertains to the question of the imperial west's disintegration vis-à-vis the so-called reges of groups who have been traditionally called 'barbarian tribes' yet in recent decades also reinterpreted as multi-ethnic war-bands, such as Franks, Vandals or Ostrogoths. Leaders of these groups have often been considered as ethnic leaders or, even more anachronistically, as 'kings' paving the way for the state-formation of their coalitions on Roman provincial soil. Instead, Börm compares such famous protagonists as Clovis, Gaiseric or Theoderic (the Amal) to the diadochoi who rivalled each other for control over Alexander the Great's empire after his death (114-117). This analogy has merit since it not only downplays the ethnic agenda that has so long dominated this field (most prominent in the 'ethnogenesis' debate), but also acknowledges the structural role reges had in the longer history of Rome as agents of the empire supplying auxiliary forces.

Consequentially, Börm still regards these men as an integral part of the Constantinopolitan 'Commonwealth' at the start of the sixth century. Yet the analogy has limits.

Men such as Ptolemaios or Seleukos had served their careers in the shadow of Alexander and thus found themselves ideally positioned to challenge one another for dominion over all territories previously ruled by him. In contrast, the career of reges such as Athaulf or Goar often commenced at the periphery of imperial power. They were essentially products of a frontier culture eventually transferring itself inside western Roman territory. Thus, one of the prime characteristics of these men was a flexibility to move both inside and outside imperial service without ever aiming at the purple (the enigmatic aspirations of a Clovis or a Theoderic notwithstanding). Nevertheless, this reviewer will take Börm's western Roman diadochoi any day over 'chieftains', and agrees that the reges played a secondary role in the story of Westroms disintegration during various provincial civil wars. Whether the fiasco of Anthemius' Vandal offensive in 468 should be regarded as the final point-of-no-return for the recovery of western imperial authority is another matter of debate (110), but it remains preferable over 476, the most notorious non-event in ancient history.

A number of minor quibbles: While nearly all categories of sources are surveyed (classizing history, chronicles, legal texts, letters, panegyrics, etc.), saints' lives are surprisingly absent (14-19). Especially for the fifth century western provinces (such as Germanus' for Gaul or Severinus' for Noricum), these often provide some of our most important insights for the interaction between 'Romans' and 'barbarians'. Alaric is given the title of magister militum after entering Stilicho's service (405 at the latest) and residing in western Illyricum (47), yet the only title given by the sources at this junction is comes. Aëtius' title at the usurper Ioannes' court is preserved as cura palatii not curopalatus (66). The buccellarii were not a "vielköpfige private Leibgarde" but state troops serving at the behest of eminent individuals (71). Rua (or Rugila) was not Attila's father, but uncle (82). No source specifies that Petronius Maximus freed slaves at the eve of Geiseric's embarkment near Rome in 455 (99). The sources specify that Marcellinus cast out the Vandals from Sardinia during the three-prong campaign of 468, not from Sicily (109). Euric is curiously styled 'Eurich II' in 473, but we know of no other (Visi)Gothic rex with this name in the fifth century (112). Odoacer was proclaimed rex by his troops, and sparingly used this title, but never in the form of rex Italiae (119, 121). The funerary inscription of the Frankish soldier in Roman service (CIL 3, 3576) is attributed to the fifth century (164). While no clear date can be established, the communis opinio rather puts it in the fourth century. This is indeed more likely, given that the soldier was buried in Acquincum, an important army base during the fourth century but effectively outside imperial control post 400.

However, for each of these criticisms one could offer an abundance of excellent observations throughout the work as a counterweight. Thus this reviewer found himself nodding to Börm's take on the shady circumstances surrounding Theodosius I's accession (33), the pressure of western elites on Stilicho in making his claim for double guardianship over Theodosius' heirs (42), dismissing 'anti-barbarian' sentiments as the rationale behind the purging of Stilicho's supporters in 408 (51), Theodosius II's distrust of the exiled Valentinian III as the son of a man considered a usurper in the east (65), the structural difference in western civil wars before and after Honorius' reign (71-72), the unlikelihood of Petronius Maximus' involvement in the murder of Aëtius (95), the significance of Majorian's rule as soldier-emperor (105), Geiseric's succession arrangements for Vandal leadership as inspired by the defects of western Roman child-emperor rule (123), the original nature of Belisarius' campaigns in the west to restore previous regimes, not as wars of conquest (135), or the minimal impact of non-Roman recruits on the decline of the western imperial army (167).

The volume has a very up-to-date bibliography, and useful tools to help the reader navigate the narrative such as a time-line, glossary, maps and a few illustrations of prominent figures and buildings. Neophytes and even undergraduate students may struggle with this text nevertheless. Börm's succinct writing style, a virtue in this reviewer's eyes, may be a curse to readers unfamiliar with this era and who might need more context or elaborate digressions to grasp the rapid succession of events. Besides a German-speaking audience, however, this book should become standard reading for an Anglophone graduate audience dealing with the fifth century west and who might otherwise gloss over continental scholarship in trepidation. Börm's prose is pellucid and with a text running just over 180 pages, linguistic barriers are no excuse not to dip their toes in different schools of thought. Börm has added his voice to the debate and it deserves to be heard.