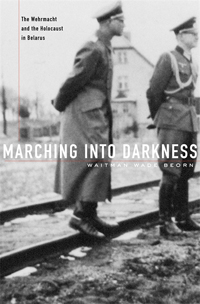 To this day there are several grey areas in the research about Holocaust history. The role and the intensity of the involvement of the Wehrmacht in the annihilation of the Jews and the history of the Holocaust in the former Soviet Union are among these insufficiently studied subjects. For a long time, a myth of a "clean Wehrmacht" existed in post-war German society. This notion started being disproved in the late 1990s. Simultaneously Western (and also former Soviet) researchers gained access to Soviet documents, which provided evidence of the mass extermination of Jews (and not of the "peaceful Soviet citizens" as it was proclaimed in official Soviet post-war propaganda), or as French priest Father Patrick Desbois calls it, "Holocaust by bullets" [1]. The recent monograph "Marching into Darkness" by American historian Waitman Beorn aims to cover both of these thematic fields.

The aim of his study is to delineate the Wehrmacht's role in the Holocaust in the East during the fall of 1941 in one particular region of the USSR - Belarus. It is very important to distinguish different categories of victims when studying the atrocities of the German Nazi Regime in the occupied Soviet territories. The author uses the terms very accurately; moreover, he rightly introduces the concept of the "Nazi genocide project" as a much larger Nazi nexus of racial and demographic decimation, extermination, and resettlement (the murder of Soviet POWs, killing of civilian non-combatants, participation in intentional starvation, etc.) which was not limited to the Holocaust itself (4). Nevertheless, Beorn concentrates his study mainly on the mass extermination of Jews.

Beorn provides the reader with the argument that German soldiers "went from awkward forays into killing to grave robbing to sadistic Jew games' in less than six months" (4-5). Even the structure of the book follows the classical sociological concept of the development stages of the conflict. The first two chapters are an introduction to the studied region and to the nature and history of the German army (the latent period). The stage of emergence or in Beorn's terms "stage of improvisation" in the assisting of the 354th Infantry Regiment to Einsatzkommando 8 in the town of Krupniki near Minsk where one thousand Jews were murdered is presented in the third chapter. The next chapter describes the stage of the escalation, or "the clarification-exhortation-execution" phase. The author investigates the anti-partisan conference in Mogilev, which explicitly connected the murder of Jews with day-to-day operations against partisans. The next three chapters are devoted to "the stage of routinization" (that is the hurting or stalemate stage in sociological language, the apogee of the conflict) of the murder of Jews in several Belarusian towns and villages by different companies of the Wehrmacht's Infantry Regiment. The penultimate chapter describes "the stage of internalization" through official guidance to murder Jews (the case of 12th Company in Szczuczyn), which could be comparable with the transformation stage of the conflict. The post-conflict period is presented in the last chapter, which deals with the post-war trials against the perpetrators. The structure of each chapter is shaped in accordance with these stages, but their order is disjointed in a way that piques the reader's interest. Beorn often starts with the culminating moment of the particular case (a detailed reconstruction of the killing process or the main result of the Mogilev conference) and then gives an impression about the place and perpetrators (both companies and individuals), the preparations and carrying out of the mass murders, and scholarly speculations on the respective case. At each stage, the author tries to provide enough examples to confirm his three main arguments explaining the depth and manner of Wehrmacht involvement in the Holocaust. These are: the role of the brutality in the military culture and the eagerness of unit leaders to participate in the genocide; a Jew-Bolshevik-partisan theory that legitimized the murder of Jews; and a direct correlation between the time of exposure of Wehrmacht units and soldiers to the genocidal practice and the level of complicity in it.

The main sources for this study are German wartime military documents and post-war survivors' testimonies and perpetrators' affidavits. Oral history is a very important source in the memory studies, but some of Beorn's statements require further proof. For example, he cites a survivor who recalled "German soldiers chasing people and beating them, throwing children to the ground" (144). In fact, civilians could rarely differentiate between SS/police and Wehrmacht troops. The description "German soldiers" appears to be a nonspecific term in many survivors' testimonies.

Beorn also claims to use the micro-historical approach in his study. To investigate the Wehrmacht's atrocities from the bottom up is a very distinctive method that seeks the answer to the question of how the Holocaust could have happened at the lowest personal level. The author consciously uses the social-psychological approach to explain why individuals were engaged in criminality on a massive scale. But he is not always constant in his dimensions and tries to universalize his conclusions by providing other examples to prove his statements (see, for example, his description the case of Lida, 179-181). The author understands himself that the universalization of his arguments could provoke further questions such as the exact number of Wehrmacht Companies that participated in the Holocaust and the depth of the complicity of each (he states that not all units were involved in the mass killings of Jews, 225). That's why the chosen case study approach needs to be seen as more argumentative without any theorization and universalization of the results of the study. Despite these methodological issues, this study is a very successful attempt of paying attention to the history of the Holocaust in the East. It makes clearer the variety of actors within the "Nazi genocide project" as a whole.

[1] Patrick Desbois: The Holocaust by Bullets. A Priest's Journey to Uncover the Truth Behind the Murder of 1.5 Million Jews, New York 2008.