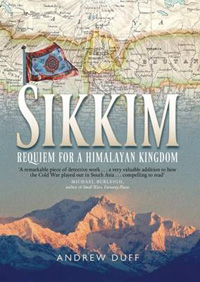 Sikkim's, often overlooked, historical relevance in understanding the coarse nature of border politics between India and present day Bangladesh and China during the Cold War years deserves the due attention this book aptly accords it. A journalist based in London and Scotland, Andrew Duff starts the story with how he came to the topic, being intrigued by the photographs of his grandfather who had lived in India for most of his life and travelled to Sikkim in 1922. He builds a great feeling of the region with the picturesque descriptions of Sikkim's landscape that persist in the reader's memory. The book vividly contextualizes British presence in the region and efficiently situates Sikkim's geo-political importance during the Cold War. All relevant, and often competing state actors, who had a direct/indirect role to play in the region, e.g. the US, Pakistan, China, Bhutan, Nepal, and India are smoothly introduced and the author skilfully builds up the underlying links.

The book consists of ten chapters, chronicling Sikkim and the trajectory of the monarchy. Chapter 1 traces the British legacy (1941-1949) in the region as the 18 years old Prince Palden Thondup Namgyal, son of the ninth Chogyal or king of Sikkim (Sir Tashi Namgyal), is thrusted into becoming the crown prince after his elder brother's death while serving the Royal Indian Air Force. It introduces the importance of the office of the political officer in the region as also the history of the Anglo-Chinese Convention of 1890 that rooted British authority in the region. Chapter 2 gives the context of Tibet's entangled history with the region (1949-1959), importantly marked by the Dalai Lama's flight to India. Chapter 3 (1959-1965) is loaded with historical facts and follows the trajectories of Thondup and Hope Cooke, their marriage and the coronation. It simultaneously introduces the characters of the Kazi and the Kazini who would later form the strongest opposition to the monarchy in the form of the Sikkim National Congress, Princess Coocoola who would later try to mobilise international support for the monarchy and India's wars with China in 1962 and Pakistan in 1965. Chapter 4 introduces both the fragility of the Indian state as a newly elected Indira Gandhi would assume prime ministership as well as that of a shaky monarchy in Sikkim. In Chapter 5 (1970-1973) the author beautifully intertwines the double narrative of his actors and their lives with the larger picture whereby the birth of Bangladesh, the role of the CIA, the Indo Soviet Friendship Treaty of 1971 and the Chogyal's unsuccessful attempts to revise the Treaty of 1950 acquire centre stage. From chapter 6 onwards (up to chapter 10, 1973-1982) the author traces the downfall or the removal of the monarchy, being interspersed with detailed descriptions of political unrest and protests in the region, the increasing power of the SNC, the separation of Hope Cooke and the Chogyal, the crucial role of the Indian Political Officer K.S. Bajpai, the role of the Indian Research and Analysis Wing in producing intelligence and the house arrest of the king as the referendum on Sikkim's status was operationalized. This chronicling ends with the death of the Chogyal in 1982. To incorporate details like the historicization of differences between the Nepalis and the Bhutia-Lepcha communities, the personal stories of the king, the elite circles and the larger domain of international politics is certainly no easy feat and the author has successfully kept to the details.

A larger question that remains unanswered is what does the story of Sikkim tell us about the larger field of geo politics at the peak of the Cold War? What can scholars of international relations know about block politics that has not been revealed by other cases and what do we learn about the Indian state's dealing of the case that we do not learn from other examples like Goa or Hyderabad? This larger and reflection could have added to the value of the book.

The book engages with sources like private letters of Martha Hamilton and Ishbel Ritchie and Hope Cooke's autobiography. One wonders if there is any archival material to be found on the king himself which would not just make him the centre of this story from the narrations of those around him, rather give us an insight into his life in his own voice. Additionally, what about the narratives of the current generations in Sikkim? As the moment of the removal of the monarchy is not a distant event, the author could have shared his ethnographic material more than he does in the text. The voices of the 'ordinary Sikkimese' that the author is often referring to in the book are often missing from the descriptions of events. They appear as abstract voices that are generalised under the common rubric of 'the Sikkimese people' and generally loom only to add to the background context, rather than participating in the story. This is perhaps why the episodes describing the protests appear to emerge almost suddenly in a narrative that otherwise keeps the 'average' Sikkimese people largely passive until page 187. This could have added the much-needed balance to the accounts of the non-Indian participants in this drama, albeit through the voices of those who did not necessarily belong to the formalized sphere of Sikkim's politics.

On some occasions it appears that the story is rendered slow in the initial chapters (which are actually full of important information) and only catches pace after page 187, as if their only purpose is to give the context to the larger culmination point of the story, the removal of the monarchy. On others, in order to keep the pace and suspense alive, and build up the story, the author attempts to write from the perspective of the actors but without due references. When describing the nuclear test's codename (221) the author narrates how "he (Thondup) was now worried that Mrs. Gandhi's non-committal attitude was evidence that she no longer cared about Sikkim's future as a separate nation." Though historical facts do suggest this could be the case, the absence of any concrete sources make this statement contestable. It is in such moments that the journalistic style of writing comes in conflict with conventions of history writing.

A book like this will not cease to be well timed, at least for the coming years, given the relative paucity of scholarly engagement with the region's history, especially within the ambit of formalised politics. It has been written in a simple (yet not simplifying) style and the author succeeds in keeping the reader riveted to the plot, the region and the lives of the actors he follows. The aforementioned reservations should not deter audiences from reading the book for its archival work, its intelligent use of newer forms of access to information like WikiLeaks, for probing into highly relevant sources that would have normally remained in the ambit of family archives, for the personalising streak the author adds to his motivation behind writing the book and finally for undertaking the daunting task of narrating the story of the region's monarchical life while simultaneously situating the region on the larger geo-political map during the Cold War years. It is a sound illustration of not just the region's history but may be viewed as a critical intervention in the general trend(s) of national historiographies that often silence 'other' regional histories.