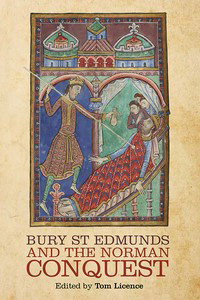 The Norman conquerors' church was monastic. It was also, for the most part, inherited. King William may have summoned the premier prelate of his Norman patrimony to his new metropolitan see at Canterbury, bringing with him the customs of Cluny, but both the foremost and the most functional churches of his new domain were already centuries old, the centres of English (and British) cults and the observant and literary traditions associated with them. Close to the apex of this Anglo-Saxon establishment was the abbey of St Edmund at Bury. It may have lacked the antiquity of Glastonbury or St Albans, and the regal heritage of Winchester or Westminster, but Bury had met mainland European influence early when the Confessor steered the appointment of the St Denisian abbot, Baldwin (1065-97). Uniquely among the Saxon abbeys it also offered the new regime a royal saint whose status, after a century and a half of sustained investment was unusually secure. Until new houses of new orders spread in the course of the twelfth century, and the monarchy's special relationship with Westminster was settled, Bury's spiritual and political capital burgeoned. This pre-eminence has been matched in the pattern of recent scholarship.

Tom Licence's collection arises from a conference convened to mark a millennium from the death of Svein Forkbeard whose brief reign marked the end of the era of Viking violence which had cost King Edmund his life and given rise to his cult, and the beginning of his monastery's rapid rise, at first, ironically, at the hands of his Scandinavian successors, Cnut and Harthacnut. By contrast with many such conventions, its cause is less to catalyse interest in Bury as to capture it as it continues to gather pace. Since 2007 there have been no fewer than four new monographs and one major critical edition (Bale 2009), Gransden (2007, 2015), Licence (2014), Pinner (2015) whose focus is Bury and the development of its cult, culture and seigniorial and royal significance from the eleventh century, quite apart from many more chapter length studies of the Bury experience of some broader themes such as hagiography, manuscript production and art. Licence's offering here is no less wide-ranging, taking in lordship, diplomata (and developments in their production and custody), music and the study and practice of medicine. While several essays will have a stand-alone value on these subjects, Licence has had some success in steering his contributors towards a shared enquiry into an experience of Normanisation which affirmed and extended the spiritual and cultural leadership of the Anglo-Saxon shrine.

As Licence observes in his short introduction, case-studies of the Conquest have shown it to have acted at one and the same time to stimulate and to suppress the currents of late Saxon monasticism. Beyond question, the documentary and textual remains from Bury attest to the opportunities afforded, if not, precisely by a new overlordship then by the reach it carried with it into the cultural mainstream of the continental mainland. Within five years from the Conquest, Edmund, king and martyr, was set firmly on European horizons as a figure for devotional and patronage who transcended regional affiliations. In his opening chapter, David Bates is careful to contextualise this transformation. In fact the spread of the cult began as much as a generation before the Conquest and it might be suggested that the coming of the Normans merely accelerated it. Nonetheless, the pace and place of Edmund's promotion in, and beyond the Norman empire became the singular, self-consciously political project of the Confessor's abbot, Baldwin of St Denis, and far exceeded the achievement of England's other, older shrines, at Canterbury, St Albans, Durham and Glastonbury. Thomas Waldman's summary of the diplomata of contemporary St Denis although limited in its interpretative comment offers the proposition that Baldwin drew inspiration for this task from his first monastic home, where a battery of charters, many of them 'creative' fictions, had secured its forward position in French territory.

The key English battleground in Baldwin's campaign was set between Bury and the diocesan bishop Herfast and in tracing the background to their final confrontation and the abbot's victory at Winchester in 1081, Sarah Foot shows that he was the beneficiary of an archival enterprise that garnered evidence of seigniorial and royal interest in the house extending back across the eleventh century. If Baldwin himself learned of the political mobilisation of a monastic chancery at St Denis, in Bury he found a home-from-home. Of these pre-Conquest archival fragments as many as 1/3 are memoranda recording the wills of the monastery's protective cordon of landholders. Among these are a notable number of women, the daughters of ealdormen, and in her chapter Liesbeth van Houts brings them and those of the neighbouring social stratum into sharper focus. She suggests that the decimation of the landed elite that came with the enforcement of the Conquest and the decline of free peasants that followed the transformation of land-holding created a colony of women seeking a religious life in association with the shrine. Their contribution to the steady rise of the cult in these years are clearly signalled by the presence of the nonna, Seitha, in the extant miracle narratives.

It was the cult that was the spearhead of Baldwin's assault on Bury's patrimony, the diocese and the wider Norman domain. In two essays Licence resumes his investigation of the 'redesign' of Edmund begun in the earlier essays and critical edition. He suggests that for the making of a continental saint the models were the Frankish monarchs - most especially, Dagobert - and, as his earlier research had pointed to, the principal architect of this literary strategy at Bury was Herman the Archdeacon. Herman's contribution, Henry Parkes suggests in his survey of the liturgy of the cult, may have extended to the composition of a new Vigil Office. Parkes views the post-Conquest developments as representing the reinforcement rather than the reinvention of commemorative patterns of Saxon monks who would have readily recognised the 'gutsy patron' orchestrated by Baldwin's brethren.

The reinforcement of the liturgical or, more broadly the commemorative opus of the monks also defined the book culture of Baldwin's abbey, Tessa Webber finds. This was not, yet, the Bury of the Bury Bible (c. 1135), and the making of books, in scriptorial and scholarly terms, does not appear to have been much more than an adjunct of the monastery's Opus Edmundi. The beginnings of the Bury scriptorium that was to blossom in the second quarter of the twelfth century may still be traced to Baldwin's tenure and in particular to Baldwin's own practice as a physician. Michael Gullick and Debby Banham show that the important anthology of medical authorities (now British Library, Sloane MS 1621) entered the abbey with Baldwin and was expanded there. Its new 'new' medical learning of the classical auctores, already current in the mainland schools, left an early mark on the horizons of the monks, as Banham glimpses in the medical miracle narratives of Herman.

It is the avant garde character of Bury that is perhaps the strongest impression cast by this collection. This was an English monastery whose reach into the European mainland anticipated the Conquest and whose profile as a cult centre was raised further in the lifetime of its first Norman abbot than any other Anglo-Saxon church. Its transformation does not conform to the traditional narrative of the effacing of pre-Conquest traditions. The coming of Baldwin and Conquest extended and enhanced ways in which the monks had garnered their shrine since the beginning of the century. The detail of the essays and their close connection with other recently published research by the same contributors does somewhat isolate these insights from any wider perspective on the experience of the Conquest. What the remarkable age of Abbot Baldwin may reveal of church and cult more generally in England at the end of the eleventh century must await another study.