Luigi Andrea Berto: In Search of the First Venetians 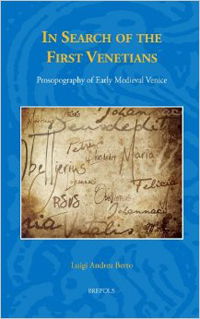 Luigi Andrea Berto is an expert of the early history of Venice and of the oldest Italian of the Middle Ages. He has edited John the Deacon, Istoria Veneticorum, the most important chronicle for the beginning of Venice; some Carolingian narratives and poems dealing with Italy, such as the Lombard history of Gotha; and he has also published extensively on both the subjects. With his last effort, Berto has combined his fields of expertise in order to deliver an imposing prosopography of the "first Venetians", from the Lombard conquest of Italy of 569, up to the brilliant reign of Peter II Orseolo (991-1009), the duke who conquered Dalmatia, whose rule opened a shining, although brief, Golden Age for early Medieval Venice.

A concise introduction explains the objectives of the work (1-4); furnishes an overview on the history of Venice up to the year 1000 (4-8); and describes the oldest Venetian institutions (8-10), together with the complex geography of the duchy (11-12). Afterwards, Berto offers the reader a list of the Venetian sees and monasteries, important to frame the numerous ecclesiasts recorded in the prosopography (13-15). Discussing the "Organization of the Material" (15-30) the author exposes the characteristics and limits of Venetian anthroponomy, together with the nature of the sources thanks to which it survived to us. On the one hand, we notice a precocious early adoption of surnames, which are immensely useful; on the other, we face a rather restricted pool of names (see the 11 pages of "Johns" in various forms, 141-152), which once common in a given family, makes the identification of individuals a nightmare. Berto explains that his selection of individuals relies on early medieval sources exclusively, and he decided to confine the names recorded in dubious narratives, such as the Chronicon Altinate, to the appendices. Moreover, he dropped the Venetian rulers' surnames for the eighth and ninth (such as Particiacus) because they are attested only in later evidence. Issues could be risen with the "individuals not included", where the author is maybe too rush in connecting an individual's name with his origin, but we are talking about a handful of cases. Very detailed, although clear, the instructions on the parameters used to enlist the names follow. The introduction is closed by the list of the main narratives and charters (31-33) used for the investigation.

The long prosopography which constitutes the core of the book (35-256) is an encompassing survey in anthroponomy to be found in edited charters, narratives and inscriptions comprising more than 1,200 individuals, which (at the moment) seems very complete. The data clusters around informative (and well know) charters, which gather with growing intensity toward the end of the selected chronological arc. The correlation is nevertheless inspiring. Names are referred with extensive (sometimes overlong) passages from the sources, which become handy for a quick search. The author engages the previous scholarship on the topic from time to time reporting the different interpretations, although, sometimes, he does so in a slightly polemical way.

Twelve appendices of uneven length (and utility) close the book. In the first the whole names' corpus is enlisted once more; this time split between lay and ecclesiastical males and females. It has to be noticed that in Venice the strong divide between lay and ecclesiastical names, which is to be found in most of the early medieval European regions, is not represented, as it was the case in many provinces and former provinces of the Byzantine World. The following lists of rulers and co-rulers could have made an essay on their own in the way of Giorgio Ravegnani's book on the exarchs of Ravenna. [1] Berto provides us, in fact, with long biographies of the Venetian dukes which, to some extent, summarize the whole history (or at least the événementiel aspect) of early medieval Venice (308-373). The following three appendices (375-389) are dedicated to titles and dignities divided among the ones of the rulers, a list of tribunes, and a catalogue of "other offices and titles", a partition which could provoke some methodological disagreement. Appendix 7 (391-395), dedicated to occupations, is among the most interesting parts: here we get a glimpse of the material base of life and some vie quotidienne thanks to the mentioning of men involved in professions such as caligarius (391), piscator, or sartor (394). Unfortunately, due to the nature of evidence, this list is very brief. The following choice of separately enlisting advocati and liberti (397-400), the former composed of three names only, is somehow puzzling. A catalogue dedicated to the ethnic and geographical appositions follows (401-410). The book is closed by a long and rich catalogue of ecclesiasts enlisted according to their see, church, or monastic foundation of belonging, which, like in the case of the rulers, could have become a study of its own (413-475).

Few issues raise. Perhaps some important anonymous characters like the tradespeople of the Miracula s. Genesii could have deserved their place in Berto's Hall of Fame. They are the "first Venetians" to be explicitly linked to the Holy Land. Characters like the tribune Antoninus, whose name his dated (according to Sartori's interpretation) to the sixth or seventh century, should perhaps be rearranged to a later context, following the most recent historical debate. Further criticism is perhaps more a matter of opinion. So, for example, a fascinating, although rather unknown, narrative such as the Vita b. Petri Urseoli could have been included in the description of the main narrative sources to give some more context to the reader.

However, these are minor queries: Berto wants to bring us evidence, and he is mostly successful in doing that. Unexpected results could pop up from his lengthy catalogue. For example, we can finally understand that John the Deacon's odd usage of labelling "Scavi" in order to describe the Slavic neighbors of Venice responded to a broad social logic and was not a lunacy of his own. In Berto's prosopography, we find individuals labelled as "Scavinicus" (unfortunately, the usage is not reported in the "ethnic definitions" sections), which become a point of entry to a broader context.

Berto's prosopography is, therefore, a welcome addition to similar enterprises describing the human population and change of Medieval Italy. This new achievement is a precious tool for any kind of research, as the author mentions in the introduction (20). It allows following clearly the transformation of an imperial province through the centuries; from the floor inscriptions of Grado, when the lagoon was a distant province of the empire, up to Peter II Orseolus's grandeur, when it has become a central place of great relevance. Historiography on Venice (and not only) will surely benefit from this work.