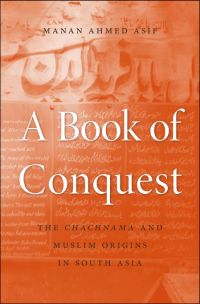 Manan Ahmad Asif's study explores beginnings, origin narratives, and their potency in our shaping of the modern world. It deals with Muslim presence in the Indian subcontinent, as well as the story of Muhammad bin Qasim and its utilization by the East India Company, British colonial historians and historians in modern India and Pakistan. At the center of both the origin narrative of Muslim past in South Asia and the study at hand is the Chachnama, a thirteenth-century Persian text authored by a man named Ali Kufi.

The Chachnama claims to be a translation of an Arabic original from the eighth century, a text which has never been found. It tells the story of the Brahmin ruler of Sindh, Chach, and the expedition of Muhammad bin Qasim into Sindh in the year 712. Until present times, the Chachnama has always been read as a conquest narrative.

Asif's central argument is that the Chachnama is neither a translation of another text nor a conquest narrative. He advocates for a completely different reading of the text as a treatise of political theory discussing advice, good government, and the understanding of social and especially religious difference (14-15); a treatise which originates in the thirteenth century and was originally written in Persian. Asif makes a strong case for this argument.

"What Is Chachnama?" (12) and how did it become what it is purported to be? These two questions guide Asif's investigation. In six chapters, he strives to reconstruct the Chachnama's "historical identity", to situate it in the political and social world of thirteenth-century Sindh, and to trace its afterlife to demonstrate how it became the origin narrative for Islam's arrival in India (20).

In Chapter 1 (23-46), Asif discusses the pre-eighth-century history of translocal networks across the Indian Ocean, the history of the Muslim campaigns in India, and the history of Muslim polities in Sindh until the eighteenth century. In Chapter 2 (47-77), he argues that the Chachnama is not a translation but a thirteenth-century text reflecting the concerns of Nasir al-Din Qabacha's court. By comparing it with early Arabic conquest narratives, he argues that, as the text does not fit within the genre's imperatives, the Chachnama is also not a conquest narrative.

In Chapter 3 (78-102), Asif argues that the Chachnama mainly elaborates its political theory by offering advice in an epistolary format, with alleged letters integrated into the narrative. In the following chapter (103-27), he deals with this political theory's understanding of difference and argues that the text focuses on the recognition of diverse sacrality, the accommodation of different communities, and the role of politics in governing difference.

In Chapter 5 (128-49), Asif analyzes the role of women in the Chachnama's narrative, which he deems crucial by epitomizing ethical subjecthood. He then traces the text's afterlife in the next chapter (150-79), focusing on the agents of the East India Company. He explains how the translations of these agents created the fundamental question of the origins of Islam in India, posited the Chachnama as the respective key text, and transitioned it into a conquest narrative.

Asif's main point of discussion is how the Chachnama is to be read. His argument is twofold: Firstly, he states that the reader's starting point is decisive. The text should be read as a thirteenth-century text. If it is read as an eighth-century text, as it has been until today, the intended meaning would be lost. Secondly, Asif argues that the Persian Chachnama should be read as a text in its own right instead of only being used to search for the alleged Arabic original and its historical value (11).

Prior knowledge is known to be an essential factor in the process of interpretation - what we know shapes the way we read. For this reason, the a priori temporal classification of the Chachnama is crucial, as Asif convincingly demonstrates.

For well over two decades, literary approaches have gained an ever-growing influence in research on Persianate historical writing, resulting in studies on authorial intent, organizational patterns, and narrative strategies. Today, it is widely acknowledged that a Persian historical narrative text should first be seen as a text rather than a source.

By examining the way in which Ali Kufi sets up his narrative, Asif contributes to the ongoing discussion on facticity and fictivity, history and literature in texts of Persianate historical writing. Arguing from a literary studies perspective, he debates an unresolved question: What were such narratives designed to be and how do we grasp their intended meaning? In posing this question, Asif joins fellow researchers Marilyn Waldman, Julie Meisami, Sholeh Quinn, and many others.

Nevertheless, the study is not without its weak points, most notably concerning the framing of the literary analysis. The reader occasionally wonders if Asif is fully aware of the research surrounding his study, especially where concerned with parts of the Persianate world other than the Indian subcontinent. For example, reading a historical narrative as a narrative instead of separating history proper from the "flotsam and jetsam" (as Asif quotes a study from 1939, 11) surrounding it is by no means a new approach. Furthermore, the pedagogical claim of medieval Persianate historical writing (59-60) may almost count as a given today.

However, this state of research is not always indicated, as Asif regularly resorts to citing historians from the later eighteenth to the early twentieth century instead. While he is correct in asserting the lack of respective research on the historical narratives from northern India, this kind of research is nevertheless being conducted on other areas of the Persianate world.

Asif's study examines a medieval text, its utilization in the eighteenth and nineteenth centuries, and its modern reception. The study is situated between historical science and politics, and between professional and local knowledge. However, the respective borders occasionally seem to blur. For example, Asif's definition of a historian is rather wide. He maintains that today's specialists in the history of northern India are historians, Pakistani and Indian national historians of the twentieth century are historians, eighteenth- and nineteenth-century colonial historians are historians, agents of the East India Company are historians, and an old man from Uch, who "brings Uch to light" (182), is a historian as well, since he is known to the people of Uch as such.

By repeatedly intertwining modern historians and historians of the past, political agents with a clearly normative agenda and bearers of traditional knowledge, Asif does not go against the impression that this text has always been mistreated (a mistreatment which has resulted in unsustainable conclusions drawn on northern Indian history). However, I doubt that modern scholarship still "generally" sees thirteenth-century Sindh as "monotheistic" (whatever this may actually imply) instead of being rather diverse (141).

More importantly, however, there appear to be some epistemological and methodological problems with the study. Asif argues - and is basically right in doing so - that one cannot understand the Chachnama without knowing the place where it was written (16-17). For this reason, he repeatedly explored the city of Uch and its surroundings and extensively tells of the conclusions he drew from his observations. He treats the Chachnama as a living text and strives to embed it in the material and cultural history of contemporary Uch (16). His reading is informed by "[...] my encounters with the people and landscape of contemporary Uch" (77).

This method raises epistemological questions concerning the actual approachability of the inhabitants of thirteenth-century Uch by way of their contemporary counterparts. Although Asif is aware of this problem (18), his study is based on the assumption that this approachability is actually possible and methodically feasible. Although he does make a good point, simply because every text's Sitz im Leben is of crucial importance for its understanding, I still wonder whether this assumption is tenable.

Furthermore, at times, the study offers a somewhat problematic relationship between the text and its reception. To name only one example: At the beginning of Chapter 3, Asif listens to a "historian" of Uch. This man tells him that "Chachnama is a wise book of this very soil, [...] with many lessons for us!", which is why Asif originally began to understand that Chachnama is a living text in Uch, with resonances in daily social life. This is not without good reason. However, when Asif begins asking, based on the historian's account, "What lessons are embedded in this text from this soil?" (80), he inevitably begins to confuse the reception of the text in the local knowledge of modern Uch with the thirteenth-century text itself.

Asif intended to offer a "contextual reading of a medieval text" (22). However, from a methodological perspective, the approach of walking through Uch to "reimagine the thirteenth century site of production of Chachnama" (16) and then reading the text in this light seems problematic.

Towards the end of the study, the problem at hand reveals itself: While Asif had set out to demystify popular origin narratives from a scholarly point of view, his approach ultimately brings him to accept, so it seems, the popular stories from another "historian" of Uch (182-84) on the city's history, stories which most modern scholars would likely classify as "factually" inaccurate.

Despite this, A Book of Conquest is a thorough, readable, and highly welcome literary analysis concerning a region of the medieval Persianate world that lacks scholarly attention. Asif's argument for rereading the Chachnama, treating it not as a translated conquest narrative from the eighth century but as a pedagogical treatise of political theory from the thirteenth, may well be considered valid. Making a strong case for his argument, Asif shows what kind of research on texts of Persianate historical writing should be conducted in the future.