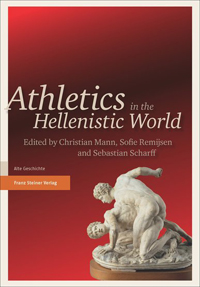 Research into Greek athletics devoted solely to the period from the time of Alexander to the Roman Empire is somewhat rare: as the editors remark "No conference, edited volume, or monograph has yet been devoted to it". The present volume results from a conference held in June 2015 at the University of Mannheim, sponsored by the German Research Council (DFG), entitled "The self-presentation of athletes in the Hellenistic period: social identities, political identities, ethnic identities". It consists of sixteen contributions, four from the University of Mannheim; nine articles are in English, seven in German. Christian Mann (Mannheim), Thomas Heine Nielsen (Copenhagen), Onno van Nijf (Groningen), and Zinon Papakonstantinou (Chicago) are distinguished experts in ancient sport. Sofie Remijsen, although well-known in the field, acts only as an editor. Other contributors are scholars better known in related fields, junior faculty, or PhD candidates. Be that as it may, all the authors make thought-provoking contributions to Hellenistic athletics. The volume contains 16 b/w illustrations, 10 b/w tables, and 38 b/w photographs. A useful and full bibliography follows each paper.

Contemporary citations to Hellenistic agones are found largely in inscriptions and papyri, strong points of this study. I note that fewer than twenty percent of the literary references cited in this collection come from that period. Mann (17-29) introduces the volume with brief comments on these primary sources. He discusses the reorganization of the agones, the social structure, and the effect of political development on athletics. He devotes only two pages to the important question of ethnicity, where the agones separated Greeks from barbarians, and contestants professed their "Greekness", even when none at first sight existed.

Curiously, one of the most interesting articles is not about the Hellenistic period at all. Thomas Heine Nielsen (31-41) reflects on the cultural role of athletes in the Archaic and Classical periods. Using a vast array of sources in this preliminary study, he "guestimates" that 155 athletic festivals can be accounted for, but rightly believes that several hundred others probably existed before the explosion of numbers in the Hellenistic era. One hopes that he will expand his research through Hellenistic and Roman times, a difficult task indeed.

The spread of private benefactors, the agonothesia, in the Hellenistic and Roman period is investigated by Papakonstantinou (95-112). He convincingly argues that in early Hellenistic Athens this development resulted not so much from financial need, but because civic patronage played such an integral role in the democracy of the period. Antiopi Argyriou-Casmeridis (153-78) analyzes the epigraphical evidence for Hellenistic athletes as models of arete. She deduces that surprisingly few honorific decrees for victorious athletes extolling arete have survived in contrast to their other achievements. From a study of grave reliefs, Kathrin Weber (179-207) examines the status of athletes in society. This detailed analysis with diagrams and illustrations shows that a citizen of the time felt it important to identify with sport. Barbara Dimde (263-87) explores how starting devices for runners became standardized, with discussion on various hysplexes, tunnels, seating areas for spectators, and the layout of the sphendone.

Van Nijf et al (43-71) examine the cities of Magnesia on the Meander, Stratonikeia, and Oropus to show how increasingly several Greek cities (and kings) began to organize festivals of their own, thereby forming a network that linked the Greek cities together. This article, parts of which have previously been published, includes excellent and copious appendices on participating cities, victors, and distances traveled to certain festivals. Bram Fauconnier (73-93) traces the appearance of the "integrated festival network" in Greece into the Roman period and comments on the important ecumenical synods of athletes and artists. Frank Daubner (231-45) explores the inscriptional evidence for cities and victors that refer to festivals in Epirus and Macedonia. [1]

Florian Klauser (289-314) surveys victory monuments in Athens, with detailed tables appended. He catalogs different types of memorials, the numbers, the materials used, their appearance, the content of the inscriptions, and their location. Marianne Mathys (131-152) examines statues in honor of athletes (mostly those in the heavy events) and the tributes to them found in the gymnasium in Pergamon. Sport and war in Sparta is the focus of Elena Franchi's contribution (113-30). The importance of horses, the connection with the nobility, and their political importance in Thessaly was evident even in pre-Hellenistic times: Sebastian Scharff (209-29) discusses equestrian victors from this region and notes it's exceptional success in hippic competitions in the agones in the first half of the third century B.C., compared with its modest athletic accomplishments.

Overall, Asia Minor seems relatively neglected in this volume in proportion to its size and significance. [2] By contrast, Hellenistic Egypt is well served. Lukas Kainz (331-53) studies the cultural meaning and importance of sport to the Ptolemies and their participation in the festivals. Leonardo Cazzadori (315-30) notes that the fragments of the Aetia of Callimachus on agones and athletes [as we have them], follow a poem on Berenice's II victory at Nemea. Stephen Sansom (247-62) analyzes four papyri relating to four Egyptian agones, three of which have a "special interest in clothing".

An Index Locorum (for authors, inscriptions, and papyri) covers the whole volume. One should express some caution with this otherwise invaluable Index: the four citations to Hellenika Oxyrhinchia, for example, should be to Xenophon's Hellenika, where it is wrongly cited (123). There is no General Index and/or Index of Names, a major shortcoming. Whether this is due to the editors or publisher, such a detailed volume that will be used by researchers to ferret out information on Hellenistic athletics certainly demands one. This reviewer at least was thwarted in his desire to count the number of citations to females, agones, ephebia, and the like. Although I received a hardback print copy, readers of the E-Book version should have an easier time searching on their own for names, places, and concepts.

As one might expect in conference proceedings, there is no conclusion to tie the articles together, nor any interaction between the contributions themselves. This volume is not for the general reader or even undergraduate students, but the editors are to be commended for their fresh approach in producing this most important volume that will prove a significant mine of information for scholars.

[1] For those interested in a neighboring area, see Evangelos Albanides: Athletics in Thrace during the Hellenistic and Roman periods, in: The International Journal of the History of Sport, 15/1 (1998), 163-72.