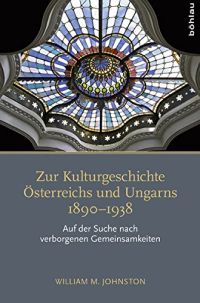 In 1972 William M. Johnston, a professor of European intellectual history at the University of Massachusetts, Amherst, published a remarkably comprehensive and insightful survey of Austrian intellectual life in the century after 1848. [1] It ranged across belles lettres, music, law, economics, social theory, philosophy, psychology, sociology, and art and film criticism. Johnston grouped intellectuals according to their interests and conceptualizations and identified shared themes and methodologies. His book proved highly useful as a reference work and helped stimulate further study by several generations of scholars and students, who proceeded to develop a large body of essays and monographic studies on Austrian cultural and intellectual history. The German translation has gone through four editions since 1974. [2] Johnston followed up in 2009 with a study of Austrian identity in the 20th century as an intellectual phenomenon. [3]

Now Johnston has produced a bold, wide-ranging study of how one can understand and conceptualize the parallels and differences in the intellectual and cultural life of Habsburg Central Europe between 1890 and 1938. He sums up his underlying thesis in the subtitle of the new book: significant but often overlooked commonalities united intellectual inquiry and artistic life not only across different regions of old Austria and Hungary but also between the two halves of the old monarchy. Scholars and critics have too often ignored those commonalities, Johnston argues, as they have focused on the many differences between Austria and Hungary, the distinctiveness of the various national cultures and communities, and the dissolution of the monarchy into smaller states based on dominant nationalities. Johnston asserts that not only was the sharing of concerns, themes and trends, and the consciousness of the commonalities among intellectuals and artists strong across the monarchy before 1918, but this continued to some degree during the succeeding decades, most especially in expressions of memory and mythologizing about the region's experience before World War I.

To support his revisionist emphasis on the cultural commonalities, Johnston organizes the book as a series of connected review essays. Part one comprises five chapters devoted largely to historians of culture and society in the Habsburg Monarchy, such as Moritz Csáky and Charles S. Maier, who have assayed the character of cultural and social development in the realm and pointed to common patterns of thought and expression. Throughout the book Johnston stresses the importance of pioneering studies of the larger cultural and intellectual patterns which have often appeared in articles rather than books and which many writers on the artistic and scholarly life of Habsburg Central Europe have overlooked. He also asserts that scholars of Austrian cultural life need to give much more attention than previously to Hungarian intellectual and artistic life, because of the parallels and connections between Hungarian culture and developments in Austria and also because of the important Hungarian analyses and critiques of common Austro-Hungarian intellectual trends. Johnston laments that many specialists on Austrian cultural history have ignored relevant Hungarian writings due to their refusal to look across the border into Hungary or their own linguistic limitations.

The first substantive chapter argues for the wider significance of histories of architecture in Austria and Hungary which have analysed the tensions between national or regional self-expression and transnational modes in architectural design and other arts. Here Johnston brings to the reader's attention a 1999 essay by the Harvard social and political historian Charles S. Maier published in a collection on modern Central European urban architecture. This in turn leads to a discussion of the writings since the late 1980s of the Hungarian-born scholar Ákos Moravánszky on the history of modern Central European architecture and its relationship to its wider cultural and intellectual context and then on to Anthony Alofsin's subtle conceptualization of the styles and languages of architecture and contextual influences on it.

Chapter four offers arguments that are pivotal for Johnston's whole analysis about the value of juxtaposing the culture and social and political experience of the great metropolitan centres of Habsburg Central Europe with developments in smaller communities on the margins, which were distinguished by great cultural and political pluralism and creative hybridity. Johnston cites here the economic historian Wolfgang Grassl and the historian of philosophy Barry Smith, who together have developed a 'theory of Austria' to understand the frequent crossings of boundaries in society, politics, and culture that characterized life across the Habsburg lands. This theorizing assigns critical importance to cities on the periphery such as Czernowitz (Chernivtsi), Temesvár (Timişoara), and Nagyvárad (Oradea), or to others in the interior with similar ethnic diversity such as Mährisch Ostrau (Ostrava), Brünn (Brno), Pressburg (Pozsony, Bratislava), Trieste, and Fiume (Rijeka), which the literary scholar Marcel Cornis-Pope has categorized as 'marginocentric'. Grassl and Smith cite as paradigmatic Béla Bartók's observation in his 1942 essay, published in English, 'Race Purity in Music', that folk melodies, whatever their origin, developed over centuries in the countryside of the Hungarian realm with a continuous crossing back and forth among peoples of different language and culture. Over time, Grassl and Smith have argued, the cultural and intellectual diversity of the region has naturally given rise to much mixing and mutual influencing in all spheres, so that the character of intellectual reference systems must be understood in these terms. Studies of the intellectual and cultural history of the region then, in Johnston's view, must take into account these realities of diversity, mutual influences, and hybridity.

In pursuing various broader conceptualizations to guide the understanding of cultural and intellectual development in Habsburg Central Europe, Johnston also takes up the synthetic and critical writings of scholars who are more familiar to the broader community of historians than figures such as Grassl and Smith or Alofsin. He devotes chapters to Moritz Csáky's work on operetta as an artistic and cultural phenomenon which united the whole region, György M. Vajda's comparative literary studies of symbolism and secession in Austria and Hungary, Peter Weibel's work on avant-garde artists and thinkers who crossed disciplinary lines, J. P. Stern's model of the 'dear purchase' and the significant contributions of cultural overachievers, and the complex relations between Austrian and Hungarian psychoanalytic thinkers. Johnston concludes the book with a discussion of the role in Habsburg Central Europe of towering but fundamentally unclassifiable figures such as Rainer Maria Rilke, Franz Kafka, Robert Musil, Gustav Mahler, Arnold Schönberg, Jože Plečnik, and Endre Ady and a review of the negative evaluations of aspects of the Habsburg lands' cultural traditions and legacies in the works of Ady, Karl Kraus, Adolf Loos, Claude Cernuschi, Ernest Gellner, and Miroslav Krleža.

All this testifies to the extraordinary range and depth of Johnston's analyses of writings on cultural and intellectual life in Habsburg Central Europe during the late 19th and 20th centuries and his deeply considered reflections on how to conceptualize historical studies in this field. Individual scholars may choose not to accept all his judgments and advice, but they should not ignore his advocacy for a more encompassing view of intellectual life and culture across the whole region. This book will surely stand as a touchstone for thinking about models and frameworks for the modern cultural history of the former Habsburg lands for a long time to come.