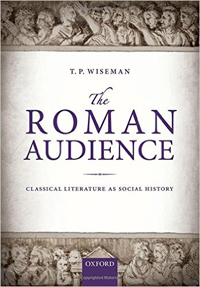 In this ambitious volume, T. P. Wiseman, surveys almost a thousand years of Roman cultural engagement with spectacle - circus, games, and theatre - to argue that all Latin literature was first produced and consumed 'live' before an audience. The argument is easy to make for the earliest fully extant Latin literary texts, the comedies of Plautus and Terence, since it is clear from what survives that they were performance scripts. But scholars who read the ancient books in their offices today have not often thought of public performance as a possible mode of production and dissemination of non-dramatic texts.

Wiseman begins with the Greeks, and the Athenian evidence for the recitation of the Homeric epics before an enthusiastic audience, and extrapolates from this a pan-Mediterranean (Greco-Etrsucan-Italic) culture of song and story performance in archaic Greece and iron age Italy. The well documented Etruscan enthusiasm for Greek cultural exports across the Italian peninsula - from Attic pots to mythic plots - confirms Wiseman's central thesis that the Romans from early on were in constant receipt of Greek cultural artifacts, and their enthusiasm for Homer and Greek drama is visible from the beginning of the Latin literary record. While it is clear from the survival (by quotation in later authors) of Livius Andronicus and Naevius - to say nothing of the other early Roman tragedians - that this literature was preserved and transmitted to later generations in written form, Wiseman makes a strong case for the contemporary public performance of the Homeric and historical epic poetry they composed in Saturnians.

The book's central insight is that the performance venues for non-dramatic poetry were those of the Roman ludi - the makeshift theatres (in temple forecourts, the forum, and the circus), where plays were produced before the construction of permanent stone theatres in the late first century BCE; and the permanent theatres and forum rostra after their construction. There is nothing inherently unlikely in this argument, and indeed much to recommend it. The ludi were occasions of wide communal engagement with popular spectacles from religious rituals through juggling, tight-rope walking and, especially, the ever-popular chariot-races, to dramatic productions. Comparative evidence from Greece confirms local audiences for Homeric song (in the classical period), philosophical argument (in the Hellenistic period), and display rhetoric (in the imperial period), and Wiseman reminds us as well of Cicero's own enjoyment of (and anxieties about) the performative aspects of political and forensic oratory in the Senate, temples (where the Senate might be summoned to meet), and forum (whether on the speaker's platform, in an address to the Roman people, or in a court hearing, held in the colonnade of a public building). In this way, Wiseman brings into his ambit not only non-dramatic poetry, but also the rich tradition of Roman public oratory such as the legal and political speeches of Cicero and Catullus' friend Licinius Calvus, which often drew enthusiastic crowds as we know from contemporary textual references. Nor, Wiseman argues, was oratory the only kind of prose writing that might draw an audience; he suggests that successive books of Julius Caesar's Commentarii on the Gallic wars might well have been read to the Roman people annually, in live presentation by one or more of the general's agents at the ludi Megalenses in April, the earliest scheduled games in the annual Roman calendar.

In every mode of literary endeavour, Wiseman argues, public presentation at the ludi and other public spectacles held in the theatres, forum, etc., was the norm for the earliest dissemination of an author's writings. This is an especially attractive hypothesis for Vergil's collection of bucolic poems, which we know to have been a smash hit on the Roman stage: performed as mimes, they made Vergil famous at an early age. But Wiseman's sensitivity to the Roman people's interest in the oral delivery of poetry and speeches, dramatic performances and historical narratives, does not extend to contexts of performance outside the immediate public setting of the games. For example, scholars have spilled a great deal of ink, arguably too much, on the dating of Vergil's Bucolica and its individual selections (eclogues), but they have well shown that Vergil wrote the pieces over some years, from the end of the 40s to the beginning of the 30s BCE, and it is incontrovertible that he dedicated different eclogues to different patrons (Buc. 3, 4, and 8 to Asinius Pollio; Buc. 6 to Alfenus Varus; Buc. 10 to Cornelius Gallus), even if there is no consensus about whether or not there was a dedicatee for the collection as a whole. Nonetheless, it is hard to imagine that individual eclogues were not performed by Vergil (or, more likely, by a slave-reader, lector) first to one or more of his Epicurean friends Varius, Plotius, and Quintilius (Probus, Vita Vergili; Donatus, Vita Vergili 37; cf. Hor. Serm. 1.5.39-44), with whom he shared the dedication of Philodemus' treatise On Flattery (P. Herc. Paris. 2), a work that seems to have addressed the frank criticism of poetic composition (cf. Hor. Ars 438-44); and then either sent on or recited as a single piece to their specific dedicatees; before being assembled into a collection and performed again either singly or in pairs or, indeed, all together at various public ludi not only in Rome but across Italy and, eventually, around the Latin-speaking western empire. Similarly, while we know that Vergil's early poetry was studied in school during his lifetime (Suet. Gram. 16), and can well believe that it was available in textual form after he began composition of the Georgics, there is no reason to think that the eclogues stopped being performed to enthusiastic public audiences not only during the rest of poet's lifetime but also long afterwards. Indeed, it is helpful to keep the range of early performance opportunities in mind, even as the eclogues were being composed.

Wiseman enriches his argument throughout by copious documentation from a wide array of contemporary classical textual and documentary evidence, and enlivens it along the way with speculative reconstruction of possible dates and specific venues of performance. Individual readers will agree, and disagree, with various parts of the argument as their inclinations and training take them. This reader was particularly interested in the suggestion that Livy delivered set-pieces from his history ab urbe condita before public audiences, as we know that Herodotus read from his Inquiry in Athens and at Olympia. Indeed, to my mind, the richest vein of material in Wiseman's volume is the evidence for the public popularity of prose literature - history, philosophy, and epideictic oratory. I would have liked to see more discussion of philosophical and oratorical performances before appreciative audiences in the imperial period (such as are treated by Maud Gleason in Making Men. Sophists and Self-Presentation in Ancient Rome, Princeton 1995), for this is a well-documented performance context in which we can also see the seeds of public interest in Christian preaching, with which Wiseman closes the volume. But such quibbles are minor when he has given us such a rich array of performance settings for the enjoyment of Latin literature in ancient Rome and her empire.