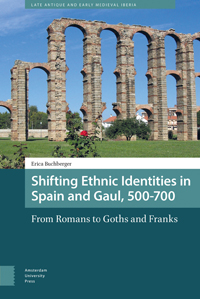 Ethnicity came to the fore (once again) as a topic for early medievalists in the 1960s and 70s, initially in the context of a reaction against Nazi interpretations of the Germanic peoples who invaded Europe at the end of Antiquity. But the subject soon took on a life of its own, in part because of the continuing debates about the influence of Nazism on early-medieval historical writing (some of them remarkably bitter and ad hominem), but also, surely, because of the ethnic tensions which became increasingly significant, most obviously in the Balkans, but more generally in Europe and the US. Buchberger begins with a survey of the historiography, going back to the eighteenth century, and repeats what is now a relatively well-known tale - although not always accurately (for instance she misrepresents Montesquieu, who was not an opponent of Boulainvilliers, and was himself an aristocrat).

Almost inevitably, coming to a topic that has been in vogue for over a generation, Buchberger provides the reader with what is largely a statement of the status quaestionis on discussions of Visigothic and Frankish ethnic identities. Although she offers some minor modifications to recently advocated positions, she does not provide any overall reinterpretation, emphasising instead the clearly correct view that individuals had multiple identities and chose between them according to the current situation. The greatest novelty is to set the evidence for Spain alongside that for Francia - although that provides few surprises, and comparison is largely left to a short conclusion.

The main body of the book lies in a series of individual studies, first of Spanish texts (John of Biclar, Isidore, the Third Council of Toledo, the Lives of the Fathers of Mérida, and Visigothic legislation), and then of Frankish authors (Gregory of Tours, Venantius Fortunatus, Fredegar, and a selection of hagiographical texts). Most of this material is familiar, but Buchberger organises it into a coherent pattern, in which Romanness is seen to decline in importance while Gothic, Frankish, and religious affiliations come to the fore. The sharpest specific observations are perhaps those on Fredegar's use of ethnic terminology when describing individuals acting outside their expected area of origin. The overall picture is certainly a reasonable one, even if some of the choices of texts are bizarre. The selection of Frankish hagiographical material is made with no reference to recent work on Merovingian hagiography by Monique Goullet and Martin Heinzelmann, which has redefined the Frankish hagiographical corpus: the discussion of the Vita Gaugerici shows no knowledge of the work of Charles Mériaux: and although there is a case for accepting the Vita Eligii as largely (although not entirely) Merovingian, Yitzhak Hen has argued powerfully that the section which most attracts Buchberger is one of the interpolated passages - an argument which may not be correct, but which certainly needs to be acknowledged and addressed.

There are also problems in approaching the subject matter in the largely chronological way adopted by Buchberger, most of which she notes in passing, although she makes far too little of them. There is an initial issue of the starting point of the discussion. The earliest text discussed in detail is the Life of Caesarius, but otherwise, chronologically, the study begins with Gregory of Tours. This means that, despite the claims Buchberger makes about integrating Romanness into the discussion, the meaning of the term Romanus at the start of the period covered is taken for granted. What it meant to describe oneself or be described as a Roman in the late fourth and fifth centuries, however, needs to be established before one can discuss change in the sixth century. Similarly, we are told that Romanness was no longer an issue in the eighth century: as Michel Rouche established, that is not the case for Aquitaine.

In addition to her discussion of Franks, Goths, and to a lesser extent Romans, Buchberger also looks at the Jews of Spain and Francia - but in far too cursory a manner. The Frankish texts have been endlessly debated. But more to the point here, while Buchberger does note the Byzantine context for Dagobert's policies, she ignores it when discussing Spain - despite plenty of recent scholarship on the matter, notably by Stefan Esders. She also makes some comments on the notion of barbarian, but in doing so misrepresents the material: Venantius Fortunatus was not an innovator when using the term barbarous in a non-derogatory sense: this was already the case in Burgundian legislation of over half a century earlier, as has been clearly demonstrated in an article which Buchberger herself cites.

In general the author pays little attention to the precise geographical context in which her texts were written, although at various moments in her argument she rightly talks of the importance placed on cities as markers of identity. She notes that people identified themselves by their cities of origin, and had long done so, but this is a point that will take more emphasis and nuance, as can be demonstrated from the writings of Sidonius Apollinaris, who talks of multiple urban affiliations. But Buchberger has nothing to say of differences between views from Seville, Mérida and Toledo, and very little to say about whether there was variation in the expression of ethnic identification in the diverse regions of Francia - calling Gregory of Tours a southerner without explanation suggests that the author is not well attuned to the differences between Provence, Aquitaine, the Auvergne, Burgundy, Neustria and Austrasia. The question of the contexts (geographical and political) in which identifications were made deserves more clinical probing than it receives here.

Nevertheless, Buchberger takes up a perfectly sensible position on the ethnic identity debate. She offers useful sketches of the presentation of Franks and Goths in a variety of texts (although there are unfortunate gaps: Marc Reydellet's discussion of Venantius Fortunatus in his study of La royauté dans la littérature latine de Sidoine Apollinaire à Isidore de Séville is ignored - but for Charibert it is central - and the rather dismissive attitude towards onomastics betrays a lack of awareness of the numerous studies of Wolfgang Haubrichs). For an undergraduate wanting to get a reasonable impression of the subject of Gothic or Frankish ethnicity this would be a perfectly sensible place to start, before turning to detailed studies that have already gone further in reading individual texts. Indeed, the study of ethnic identity itself has already moved on, having become but one element in far broader discussions of strategies of identification, distinction, and difference.