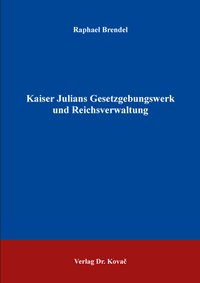 Raphael Brendel's important and learned book is the revised version of a doctoral dissertation, written at Munich under the supervision of Jens-Uwe Krause. As Brendel himself explains, except for Constantine I, Julian has received study unequaled among fourth-century emperors. Almost every aspect of his short reign has been thoroughly studied, yet his legislation represents an exception and continues to be a relatively neglected field.

Brendel's work follows in the path of two recent studies of the legislation of individual Roman emperors of the fourth century by Sebastian Schmidt-Hofner and John Dillon. [1] However, in contrast to these authors, Brendel offers not only a general study of Julian's legislation but also a complete corpus of all extant laws that can be securely assigned to this emperor, together with translations and comprehensive commentaries.

The book has a clear structure which is easy to follow. In the introduction (15-32), Brendel lays out the general plan of his work and presents a detailed overview of past research that shows how the image of Julian as a reformer presented by the ancient literary sources has conditioned, even distorted, the interpretation of his legislative activity.

Next, after a discussion of the dating of some laws transmitted without an accurate date in the Theodosian code, Brendel presents his compilation of Julian's legislation. The collection represents the core of the book (49-380); it is divided according to the laws' subjects into six main groups: procedural law, marriage and family, coinage and prices, corruption and abuse of power, military law, cities and taxes. Two especially important laws are discussed outside this classification, Julian's burial law and his famous "School Edict" (surprisingly, the latter is only dealt with briefly as Brendel reserves a detailed discussion for a future work). In this section, Brendel offers the original text and the translation of each law and of the relevant late antique and medieval commentaries (Summaria antiqua, Summa Perusina, Libri basilicorum, and others). He also presents a detailed commentary of each law discussing all important issues and reviewing in detail all significant contributions of previous studies. In many cases, Brendel also includes the texts and translations of related laws by other emperors and of literary and epigraphic sources.

In his commentaries, Brendel places each law in the context of earlier legislation, convincingly demonstrating that Julian, as a rule, continued trends already present in the laws of his predecessors. He also persuasively rejects the traditional view of Julian as a reformer interested in the welfare of the common people and of his legislation as motivated by an anti-Christian zeal or an anti-Constantinian bias. Brendel includes some important excurses on subjects related to specific laws, such as his discussion of the supposedly progressive character of Julian's stand on women's rights (which Brendel rightly rejects) or his general analysis of Julian's coinage reform and of the meaning of the bull depicted on the new silver-clad maiorina issued during his reign.

It is not possible in this review to make justice to the wealth of ideas and insights offered by Brendel in his commentaries to each law. This reviewer found particularly stimulating Brendel's discussion of C. Th. 1.16.8, an imperial constitution also known from an epigraphic source. Brendel points out that the possibility of comparing these two versions indicates that the compilers of the Theodosian code did not alter the essentials of the text (89-95). The same applies to Brendel's interpretation of C.Th. 5.20.1 on customary law.

In the third and last part of the work (381-426), Brendel presents his general analysis of Julian's legislation. He begins with a critical review of Schmidt-Hofner's model for the study of the laws of late Roman emperors, which is based on the two pair of concepts: action/reaction, innovation/affirmation. Brendel applies these concepts to Julian's laws, emphasizing that only an inductive study based on the individual analysis of each imperial constitution can test its validity. Brendel recognizes as an important contribution of Schmidt-Hofner's model the idea that reaction and innovation can be combined in imperial legislation; however, in general, he finds this model wanting because he considers it not subtle enough to grasp the intricacies and complexities of imperial legislative activity.

In Brendel's view, it is true that the imperial government, as a rule, reacted to petitions. Nevertheless, the opportunity to introduce modifications and improvements was seldom missed. Thus, legislation was developed by taking advantage of chance opportunities and not through general reforms. Brendel's own model can be summarized in the expression "Fortschritt nach Bedarf" (422).

Brendel discusses next the motivations of Julian's legislation and argues that the laws do not confirm the image of an anti-Christian emperor presented by the ancient literary sources. The same applies to the alleged anti-Constantian bias of his legislation. Of course, for Brendel, it is not possible to deny the general animosity towards Christianity of Julian's policy, however, the emperor did not intend to reach his religious goals primarily through his legislative activity (398). Moreover, Brendel also rejects the traditional view of the emperor as a committed ruler personally involved in all aspects of government and argues that Julian acted rather as an average late Roman emperor. An analysis of the addressees of his laws confirms this and indicates also that Julian was not particularly concerned with the welfare of the common people. Brendel concludes, logically, that the ancient literary sources offer little useful information for the study of Julian's legislation.

Subsequently, Brendel considers some possible contributions of his work for the study of the late Roman law codes and stresses the importance of including in the analysis the information provided by the late antique and medieval commentaries. Finally, he returns to the question of the general characterization of Julian's reign, arguing again that the pair of concepts innovation/affirmation cannot adequately comprehend the majority of Julian's laws, which should be placed in the middle point between revolutionary change and repetition of current law.

As noted at the beginning of this review, Julian's legislation is a relatively neglected field of study. The present book is a fine piece of scholarship that makes a significant contribution to change this state of affairs and lays a solid foundation for future work. Brendel deserves special praise for his sound argumentation, for his careful collection of relevant source material, and for his thorough review of all research literature.