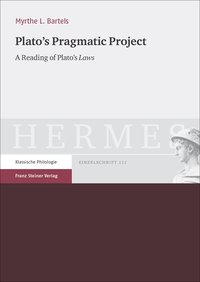 Plato's Laws, unloved and mostly unread for much of the twentieth century, has provoked much more interest in the last twenty or thirty years or so. Monographs have started to appear, notably Christopher Bobonich's Plato's Utopia Recast (2002), and edited collections and new translations and editions are proliferating. Plato's Pragmatic Project is a welcome new arrival from the Netherlands, lucidly written, well organised, and offering a directly stated and refreshingly different perspective on what remains in many ways an elusive text.

The Laws is often approached by way of contrast with the Republic: as presenting a second-best approximation to the optimal ideal of the earlier dialogue, whether because Plato has lost his belief in that ideal, perhaps following his disastrous involvement in Sicilian politics in the 360s BC, or because he always recognised that in practice the ideal could only ever be approximated by the sort of polity proposed in the Laws. Bartels argues that such approaches are misconceived. The Laws constitutes an altogether independent project, bearing no significant relation of any kind to the Republic or indeed to earlier compositions with political implications such as Apology or Crito. The notion of justice that governs the argumentation of all three of these works is notable only by its virtual absence in the bulk of the Laws. Nor does the Laws presuppose or appeal to any metaphysical norm. Its lawgiving never achieves the status of a definitive legal code for the projected Cretan city of Magnesia, nor is it implied that the legislative activity undertaken in the dialogue proceeds on the basis of authoritative expertise, or that the Nocturnal Council charged with reviewing laws does so on a foundation of philosophical understanding of Platonic Forms, such as is ascribed to the philosopher rulers of the Republic. 'Plato's last work', Bartels contends (204), 'creates its own moral framework, in which lawgiving provides a convenient practical test for a notion of virtue understood as social conditioning.'

Her sustained development of this cluster of interdependent interpretative positions is impressively done. It stakes out a genuinely original and attractive reading of the dialogue. Perhaps its most powerful component is the detailed account Bartels gives (in Chapter 4 and 5 of the book) of the way lawgiving is actually done in the Laws. Crucially important for her is that it is developed in conversation between the three interlocutors, without any suggestion that any of them - the Athenian stranger included - is an expert. What we see unfolding is an experiment, to see if a viable set of laws can be constructed taking as their hypothesis the conception of virtue worked out above all in Books 1 and 2. The Laws famously distinguishes between laws proper and 'preambles'. But Bartels is able to show that in practice that distinction is fluid. No less importantly, she demonstrates convincingly that much of what the interlocutors take themselves (or sometimes the 'lawgiver' they imagine) to be supplying is a sort of sketch, which it will be for the successors they talk about to complete.

There are inevitable downsides to any account of the Laws even as comprehensive and far-reaching as is offered here. I mention three dimensions of the dialogue that are absent in Bartels' monograph. First is its religious and theological framework. The first word of the whole work is - notoriously - 'god'. Bartels seems to me quite right (against Straussians, among others) in her contention that it is never implied that the legislation of the Laws has divine inspiration or carries divine authority. Nonetheless, from the outset the virtues are identified as divine goods, and the entire educational and legislative programme of the dialogue makes proper veneration of the gods its first priority, whether in its most general statements or in its ordering of topics or in its detailed prescriptions. For the most part this framework is assumed, not argued for nor treated as certain metaphysical truth, although Book 10 does attempt a proof of the existence and providence of gods. To reduce the virtues, as Bartels does, to a matter of pragmatic social conditioning, is to miss something fundamental to the vision of the Laws.

Secondly, the Laws is a dialogue drenched in intertextuality, above all in its echoes of other Platonic dialogues. Bartels seems deaf to these. Like some other scholars, she is unwilling to see any reference to the Republic in the passage in Book 5 on a first, second, and third city (739b-e); she has nothing at all to say about the possible relationship of the ensuing discussion of communal land holding (739e-740a) with the provisions of the Republic; nor does she note or ponder the similarity of the Laws' insistence that men and women should follow the same pursuits (7.804d-805b) with the Republic's arguments relating to women guardians. Further examples could be multiplied. The possibility that the ideal knowledge rejected in Book 9 as unattainable (875a-d) is what was attributed to the statesman in the Politicus, in a passage (293e-302b) which seems in many ways parallel, is simply not considered at all.

Thirdly, in her final paragraph, Bartels herself raises the question (209): 'why has Plato in Laws, his last work, embarked on a project so fundamentally at odds with the core principles of his own philosophy?' She then makes some brief remarks, sound enough so far as they go, about the dialogue's rootedness in a mid-fourth century context. But others have grappled with what is essentially that same question, and it would have been good to know her view of other attempts - besides the unitarian and developmentalist interpretations she rejects - that have been made to answer it. I think it a pity Bartels did not pay more attention here to the Crito, discussed by her earlier in the book (59-64). Socrates notoriously drops philosophical argumentation at a key point in that dialogue in favour of a rhetorical appeal, calculated to persuade his friend Crito in this particular conversation, which is put in the mouth of the personified laws of Athens. Is there not a possible parallel here with the resort to law and legislation, and with the general avoidance of argument from higher principles, in the friendly dialogue context of the Laws? In other words: is the dialogic strategy of the Laws not in a way anticipated in the Crito?

As her ample bibliography confirms, Bartels is well informed on existing scholarship, and in general evaluates it fairly. I confess to being mildly aggrieved at being singled out (118 n. 9) for not appreciating that Cleinias's announcement that he is to be a legislator for a new colony on Crete is volunteered in response to the Athenian's wish for a test of the ideas about virtue and community developed in the first three books (3.702b-c). The author seems to have failed to read my note on the passage in the Schofield and Griffith English edition (Plato: Laws [Cambridge, 2016], 138 n.72). There are a number of indexes, including a useful index of key Greek expressions and a full listing of passages in ancient texts mentioned or cited.

All in all, this is a stimulating and challenging work of good scholarship, which deserves - and I hope will receive - serious attention by anyone working on the Laws.