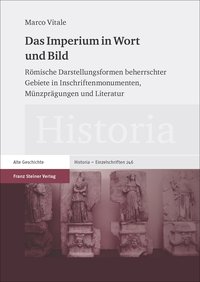 Marco Vitale is known as the highly productive author of studies concerning the Roman provincial organization on the practical and the symbolical level, especially in Asia Minor, and the Roman ruler cult. These are not exactly esoteric, neglected subjects; nevertheless, Vitale manages repeatedly to contribute new insights to long-running debates. Under review here is the revised version of his Habilitationsschrift, Zürich 2016. This time he casts the net very wide, geographically and chronologically: he is dealing with nothing less than all of the Roman Empire during a time span that ranges from the Republic (from the late 3rd century B.C. onwards) to late imperial days (4th c A.D.).

The main title of his book, Das Imperium in Wort und Bild, is rather ambiguous, and we need the subtitle to find out what Vitale's subject actually is: the manner in which Romans visualize and describe the constituent parts of the empire, by way of inscribed monuments, coins, and literary texts (there is also a tiny bit about how the subjects of Rome see themselves - a perspective that is but rarely documented in our sources). It should be said that coinage gets by far the most attention; it is undeniably the richest source for the subject.

Obviously, this is a very ambitious study about what, in Roman eyes, the empire actually is, about which meaningful units that empire is supposed to be composed of, and about how the discourse concerning these units develops. I say 'develops', because all of this has to be seen in its historical context. What is the exact relationship between the status of some ethnographic, geographic or administrative unit, and the way in which it is depicted? Apart from more specific findings, to which we will return later on, an important conclusion drawn by Vitale from the evidence (325), but also one of his methodological points of departure (46), is that there are no long-term continuities, such as an unchanging artistic convention. Everything is subject to historical dynamism and has to be looked at within its contexts. Even the same imagery can be used to express different meanings, or a comparable meaning expressed by different imagery. When we scrutinize the multifarious materials brought together by Vitale, we cannot but conclude that he is right: images and words are in a constant flux, ever adapting to a changing environment - which does not make Vitale's work, and our task in reading it, any easier.

The book consists of three parts. The first part consists of 35 pages of introduction, mainly historiography, an overview of the sources, and methodological considerations. Important is the way in which he makes short thrift of a number of existing preconceptions, such as the notion that personifications were meant to communicate with the illiterate who could not read the inscriptions or other written labels, or the many speculations, especially in the field of gender studies, about the fact that most personifications are feminine. The first is simply falsified by pointing out that many personifications do not carry labels at all and thus seem directed at the literate as much as the illiterate; the femininity of the personifications Vitale shows clearly to be grounded in grammar: feminine personifications correspond to a feminine nomenclature.

The second part, some 135 pages, that is one half on the book, deals with many different kinds of Roman imagery, discussed in an exemplary manner, that all feed into a specific imperial visual and textual discourse. Vitale deals with the triumphus, tropaea, coin images and legends, Augustus' Res Gestae and monuments as the Sebasteion at Aphrodisias and the imperial fora and the Hadrianeum in Campo Martio in Rome. The arrangement is chronological, but within the chronology individual items give rise to more thematic discussions, such as imperial victory titles. Vitale seeks to elucidate what he calls the Darstellungslogik, the programmatic way in which the imagery is put together. True to his historic-contextual approach we should in fact be speaking of Darstellungslogiken in the plural. Vitale provides an exhaustive analysis of the criteria that govern the production of the imagery, and the messages which the imagery bears out, and how these were received. The text is extremely dense, and almost every page contains a number of interesting observations which it is impossible to discuss here. As was already said, this book is not an easy read; I can add that it is also very hard to summarize - another point we will come back to.

The third part, 140 pages, zooms in on the personification of the provinces. We follow these from their genesis (on 1st-century B.C. coins) to the days of Diocletian, when such personifications, usually feminine and definitely not inherently negative, cease and we get a new language of strive and negative xenophobia, with the calcatio colli and calcatio serpentis imagery (trampling the enemy underfoot) and the generic labelling of the Other as gentes barbarae. Before we get there, we are given a comprehensive overview of personifications with interesting detail on the Sicilian Triskeles, the personified Italy and the origo Augusti, the personification of the native province of the emperor, the coinage of client kingdoms, and so on. There are few pages on the way in which the conquered depict themselves, but there is not much beyond the coinage of some Cilician and Syrian cities. There is also an excursus (which does not really belong, even if it is obliquely relevant) on the depiction of (defeated) Romans on Parthian and Sassanidian coins, and in the reliefs of the victorious Shapur I. Again there are numerous interesting observations on many different provincial personifications (or their alternatives), e.g. that a territory that is incorporated into the empire is depicted as a personified province, but that the imagery for a territory that has not (yet) been conquered is never geographical but always ethnical. In this way we can slowly piece together something of a Roman world view. But we never get there in the end: the world view we are looking for is too fragmented and too dynamic.

So what does Vitale conclude from his 300 pages of detailed enquiry? As he himself states (334) there is no simple thesis concerning the production, dissemination and reception of images to be deduced from his text. On the highest level of abstraction, one can say that from the Flavian to the Antonine emperors the imagery stressed the unity of the empire, by focusing on administrative units, mostly the provinces. Before that period, and following it, the imagery is one of conflict and conquest. Here Vitale answers a question that he asks himself early in the book: is the imagery supposed to show Roman imperial power subjecting its enemies, or is it about inclusiveness, about being part of an empire? He suggests that his results can be put to use in a much wider discussion about the integrative nature, or not, of the Roman Empire, the debate about what used to be called Romanisation but is now left without a proper name.

On a lower level of abstraction, Vitale categorizes the evidence in seven categories: 1. Armed opponents (Republic to early empire); 2. Prisoners of war (Republic to 3rd c. A.D.); 3. Elite prisoners (late Republic); 4. Gods (1st c. B.C. to 2/3 c. A.D.); 5. Personifications (1ste c. B.C. - 3rd c. A.D.); 6. Client kings (Augustan / 2nd c. A.D.); 7. Objects or animals (Republic to early empire). But of course his objective is to show how such categories are put to use: and this is dependent on the historical context. The categories are a mere tool to help us grasp at least something of what is so difficult to grasp at all.

On opening the book, one is immediately struck by the fact that it is composed of numbered paragraphs, up to four levels down, e.g. "2.3.7.2 Die ethne im Sebasteion von Aphrodisias". Such numbers might be helpful in elucidating the structure of the whole and reminding the reader where he/she is in relation to the overall argument. Nevertheless, I am convinced that a text will be more coherent when composed as a continuous account, and not as a collection of numbered paragraphs. I think the present text bears this out: I find it hard to find my way here. In part this is an issue of typography: to put all levels on the contents page without any white space, without any indent, seems like a conscious effort to confuse the reader. More fundamentally, the fact that the author himself finds it hard to tell what the central argument of his text is and has trouble summarizing his text, seems to be mirrored in the structure of the book. There are many things that are relevant, but they resist coming together in a single narrative. Maybe this is more of a book to delve into than to read from cover to cover. To assist in delving there is an index, but it is rather slight; however, there is always the table of contents with its numbered paragraphs - some 90 "chapters" to choose from.

This being said, it should be stressed that anyone with an interest in personifications, numismatics, Roman imperial discourse or more generally what Zanker dubbed "die Macht der Bilder" should make use of this book. Everything said up to now about "Darstellungsformen beherrschter Gebiete" is quite superficial compared to Vitale's awesome, if ungraspable book about an ungraspable, shape-shifting phenomenon, a book that nevertheless asks us to sit down and give it a try, because what it tells us is so important for our understanding of the way in which the Romans saw the world, and themselves.