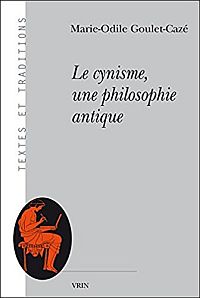 The title of this volume answers its major question, whether Cynicism is "an ancient philosophy." Diogenes Laertius, our only comprehensive source for the standing of Cynicism among the Greek philosophies he knew, around 230 CE, highlights the negative view of the early Hellenistic historian Hippobotus (1.19) but affirms the positive himself (6.103), and Marie-Odile Goulet-Cazé, too, has argued for the affirmative explicitly in a 1993 article (chapter 10 in the present volume) and implicitly throughout her career. Especially her monograph of 1986, L'Ascèse Cynique, expounds a simple, positive conception of Cynic ethics: cultivation of the person, especially the body, through rigorous training (askesis) and effort (ponos), a practice to be considered a popular philosophy not just a life-style by the standard of its causal outcome in virtue (arete), which is neither intellectual nor doctrinal but based in the soul because it amounts to self-regulation (enkrateia).

The volume is a collection of sixteen previously published articles on ancient Cynicism, from 1982 to 2013, with the addition of two original pieces, one on the relation between Zeno of Citium's Politeia and that of Diogenes of Sinope, developing the interpretation published in her 2003 monograph, Les Kunika du stoïcisme, and an Epilogue on the evidence for the origin of Cynicism in the fourth century BCE, more comprehensive than any previous study. Excluded but frequently referenced are her three monographs on Cynicism, those mentioned plus Cynisme et christianisme dans l'Antiquité (2014). Included are two lengthy chapters from Aufstieg und Niedergang der Römischen Welt, on Diogenes Laertius' sixth book (1992) and Cynicism of the Imperial Period (1990), and these dominate, respectively, the first two of the books' three sections, the first demonstrating principles of method and the second offering synthetic and chronological overviews of Greek and Roman Cynicism. The final section, entitled "La philosophie Cynique", contains studies of distinctly Cynic positions on topics such as religion, law and sex, and an important supplement to her early work, "Les cyniques dans l'Antiquité, des intellectuels marginaux?" (chapter 15), where she emphasizes the subversive and challenging rhetorical stances of the Cynics. Although some pieces appear repetitive when combined in one volume, the reader is enabled by three ample indices of terms, ancient sources, and topics to locate the correspondences across Goulet-Cazé's body of work and appreciate its unity and development.

No one has done more for the modern study of ancient Cynicism than Goulet-Cazé. In 1980, scholars were faced with a firmly negative reception of ancient Cynicism, based partly in the elitist modern reception of Greek and Roman antiquity generally and partly in early twentieth-century rejection of the speculative work on the Cynics by nineteenth-century German scholars. The fruits of this earlier period were collected by Margarethe Billerbeck in a 1991 anthology. Goulet-Cazé organized the first modern conference on ancient Cynicism in Paris in 1991, which resulted in two co-edited volumes, Le Cynisme Ancien et ses Prolongements (1993, with R. Goulet) and The Cynics (1996, with B. Branham). These collections, together with her monographs, the studies collected in this volume, and the work of the younger scholars she has inspired, represent today's state of opinion on the ancient Cynics. No longer do we know the Cynics as mere buffoons, opponents of wealth and high culture, and advocates of negative freedom, but we recognize the serious ethical goal that is supposed to justify their harsh tactics and modes of persuasion.

In her prefatory remarks, Goulet-Cazé summarizes the major points about the Cynic tradition for which she has argued over the last forty years. One set concerns the particularity of the individual Cynics and the diversity of the "Cynicisms" they practiced in varying cultural situations across nine centuries, while retaining an enduring philosophical identity. Another ongoing topic is the Stoic influence on Diogenes Laertius' history of Cynicism, especially the definitive role allegedly played by the second-century Stoic Apollodorus of Seleucia. A third topic is the role of Antisthenes in founding Cynicism. To the first, one can hardly overstate the importance of substantive precision, together with its methodological correlates, in a field easily reduced to banality. Goulet-Cazé excels in historical and philological rigor. The compelling and often brilliant parallels she has found across the difficult textual evidence we use when we reconstruct ancient Cynicism, especially within Diogenes Laertius, the Anthology of Stobaeus, the pseudo-Cynic Epistles of the Imperial period, and Cicero's dialogues, have been decisive even to those who disagree with some of her broader positions.

As for Apollodorus, this is one case where a hypothesis takes on unmerited global importance in Goulet-Cazé's work. Already her 1982 article "Un syllogism Stoïcien sur la loi dans la doxographie de Diogène le Cynique" (chapter 1) appeals to Apollodorus' supposedly novel account of the parallel between Cynicism and Stoicism to explain the misattribution, as Goulet-Cazé characterizes it, of the syllogistic form to Diogenes of Sinope in his argument about the civility of law at Diogenes Laertius 6.72. More plausible is the view of others, that Diogenes was parodying the syllogistic arguments of his contemporary Academics, and the plausibility is greater if we allow that Diogenes' philosophy included not just askesis but also intellectual principles and content, if always with a subversive twist. Throughout Goulet-Cazé's articles and books, Apollodorus is made responsible for the assimilation of Cynicism to Stoicism in Diogenes Laertius, and this seems odd in consideration of Goulet-Cazé's commitment to the serious ethical core of Diogenean Cynicism. If Antisthenes can be restored to the tradition, as a bifurcated inspiration to both Diogenes and the Stoics directly (by his books), the narrative of Diogenes Laertius looks not so fabricated as some would have it.

Goulet-Cazé's treatment of Antisthenes is nuanced, and the Epilogue adds evidence to her older interesting argument (chapter 7) that Antisthenes was the first to be called a Dog, although not the first Cynic, insofar as he did not adopt the Cynic lifestyle and did not found a tradition. Dissecting the bundle of criteria for deciding where Cynicism starts is the best tactic for negotiating this question. She also reaffirms her argument from 1992 (chapter 4) that the Ajax and Odysseus are not authentic, but the works of an imitator seeking to illustrate Antisthenes' alleged following of Gorgias. Here it appears that Goulet-Cazé accepts the traditional distinction between the Socratic and the Sophist, as well as the positivist reconstruction of Antisthenes' paradoxical statements. By comparison with what she expects from Antisthenes, the speeches are "conceptually disappointing and impoverished." But if we allow that Antisthenes' paradox "it is not possible to gainsay" was a position not about absolute universal concepts, but about communication between persons of different levels of knowledge, then the pair of speeches can be read to yield richer meaning. Admitting these speeches to the evidence, in turn, yields an Antisthenes who holds both dogmatic views about reason and virtue and aporetic views about language and culture, who plausibly did inspire both the Cynics and the Stoics in ways that are not continuous or mutually compatible, but still connected in a real historical nexus. This nexus must only be understood as more complicated than the line of succession constructed by the Hellenistic historians of philosophy and reproduced by Diogenes Laertius. And here we all agree.

This volume is an excellent addition to the library of scholarship on the Cynics and stands as an index to Goulet-Cazé's invaluable contributions.