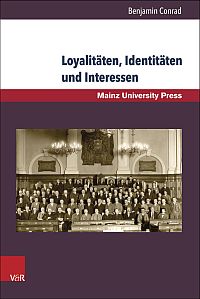 After the end of the First World War the political landscape in Europe, especially in the Baltic Sea region and Eastern Europe, was vastly different from what it had been in 1914. A number of new states had come into existence and the power relationships between different ethnic groups, or nationalities, had dramatically changed. Benjamin Conrad takes a closer look at two such examples, namely the newly formed Latvian and Polish states and their respective German minorities, in his study of German members of parliament in Latvia and Poland during the interwar period.

The book's focus is on the loyalties, identities and fields of politics of the German members of parliament in Latvia and Poland and to what extent these changed over time. Using a type of source material that has not been overly utilized previously, namely short-hand minutes from the Latvian Saeima and the Polish Sejm, he provides new and detailed information. He also critically assesses what has previously been written in the field. Conrad's full statistical analysis of all the shorthand minutes from both parliaments shows, among other things, the number of times German Saeima and Sejm members spoke before the parliament, which will undoubtedly make this book an important source of information for future researchers.

Conrad describes his work as a contribution to the research about the interwar period, but also hints that it could be seen as a contribution to the knowledge about Eastern Europe with regard to democracy, social history and nationalism (12). Given the empirical findings presented, this is clearly achieved. However, the somewhat descriptive format, as well as a certain lack of historical background and context, probably makes the narrative difficult to follow for the uninitiated reader. This unfortunately makes the impact of this research somewhat limited in scope as it presupposes knowledge about the two empirical cases. For instance, a reader who is mainly interested in the problems facing democracy during the interwar period would find it difficult to understand the Latvian and Polish cases and therefore the value of Conrad's contribution.

A more consistent dialogue with previous research would have been desirable. It is mostly done, and interestingly so, with regard to the Baltic Germans. An elaborated discussion relating the results to current research on other minority groups in Latvia and Poland, the majority population and their political representatives would have been interesting. [1] One would get a better understanding of the actions and strategies of the German members of parliament if they were more consistently related to the societal context.

Conrad's comparative stance draws on a number of similarities between the German minorities in Latvia and Poland, such as the size of the groups, the unwanted affiliation to the new state, and their history as, or as part of, a ruling elite (13). Nonetheless, there are also differences between the two German minorities: their historical connection to the area, and the proximity to or distance from the German state. The book would have benefited from a more in-depth discussion of these differences both generally and in connection to the results. This is done in some instances, for example in the case of the higher level of participation in parliamentary work among the Baltic Germans in Latvia, but could have been done more consistently. However, an interesting point is that the level of participation among the German Sejm members in Poland varied according to which part of Poland they came from (158-160).

Conrad presents a number of interesting results. The language question is especially fascinating as it highlights the issue of loyalties and identities. This was one of the fields of politics that Conrad identifies, and was much more important for the Baltic Germans in Latvia than the Germans in Poland. The German Saeima members in Latvia could also, in contrast to their counterparts in Poland, speak in German before the parliament. They chose to exercise this right, even when symbolically it may have been prudent to use Latvian. Unlike the Russian Saeima members in Latvia, the Baltic Germans never made the symbolical gesture of declaring allegiance to the Latvian state before the parliament in the Latvian language.

Overall, the promised comparison falls somewhat short. The book consists of four parts: an introduction, two separate parts on each case, and a short final comparative discussion. Regrettably, the final part does not even count five full pages. Still, it has the beginnings of a fascinating analysis using Rogers Brubaker's Triadic Nexus. This opens up for a discussion not only about the relationship between a state and a minority group but also a second state's influence, in this case the German Reich (165-169).

[1] For example a number of contributions in Zvi Gitelman (ed.): The Emergence of Modern Jewish Politics. Bundism and Zionism in Eastern Europe, Pittsburgh 2003, focuses on interwar Poland.