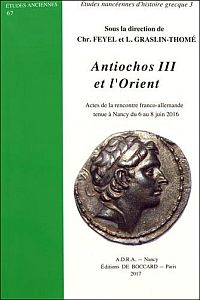 The past decade has witnessed a veritable renaissance in the study of the Seleucid empire that has radically changed our perception of this particular successor kingdom, and this recent volume edited by Christophe Feyel and Laetitia Graslin-Thomé makes a critical contribution to this (re-)emerging field with its re-evaluation of Antiochos III and the Hellenistic East. Its topic is one that greatly deserved specific scholarly attention.

The reign of Antiochos III traditionally sits as something of an awkward chronological bookend in Hellenistic studies: from Bevan in 1902 to Sherwin-White and Kuhrt in 1993 it traditionally marked the end of Seleucid expansion and the beginning of Seleucid dissolution, while to historians of the Roman Republic it marked the beginning of Rome's governance in the Eastern Mediterranean and the end of Seleukid influence in the Greek Mainland. The broad ramifications of the king's career meant that his reign was seldom considered on its own, and this volume makes a key contribution to reversing this trend.

In the more specific realm of Seleucid studies the volume's approach is particularly erudite given recent work on subjects revolving around Antiochos III and the East. Antiochos IV has been the subject of a recent biography by Peter Franz Mittag in 2006, from his reign to the end of the dynasty was well-discussed by Kay Ehling in 2008, while the western perspective of Antiochos III's reign has been analysed by John Grainger's 2002 monograph The Roman War of Antiochos the Great and John Ma's 1999 book Antiochos III and the Cities of Western Asia Minor. Just as was the case for Antiochos III in the 210s B.C., the East is the next field of studies to be conquered, and the editors have mounted a formidable expedition into this fertile scholarly field of study.

This scholarly context, discussed by the editors in their preface (5-8), is precisely what motivated the conference held at Nancy from 6 to 8 June 2016. As they discuss, the perceived rupture of the reign of Antiochos IV can better be seen as his response to the complex legacy he inherited from his father Antiochos III. Given the recent work on Antiochos III and the West, what then can be said of Antiochos and the East? The editors have assembled fourteen studies on diverse aspects of the king's relationship with the Hellenistic East, both within his kingdom and without. The methodological approach uniting them is extremely erudite: the subject cannot be painted with broad strokes, but only understood through the king's interaction with the local context unique to each of the regions that comprises the Seleucid Empire.

The breadth and diversity of studies contained in the volume is remarkable, and few evidentiary stones have been left unturned by these contributions that have been published in French, English, and German by an impressive assemblage of researchers. Each cannot be discussed individually or in great depth, but some remarks should hopefully suffice. P. P. Iossif's (37-77) chapter on Antiochos' precious metal production provides a fascinating snapshot of the movement of coins throughout the Empire, and argues convincingly that the king had a coherent monetary plan. As a fairly specific analysis of a subset of the vast data provided by the author's extremely impressive Seleucid Hoards Database and Seleucid Excavations Database, this is just the tip of the proverbial iceberg. For the epigraphist, Chr. Feyel assembles a fascinating epigraphic dossier (107-142) of the city of Skythopolis between Lake Galilee and the Dead Sea. His analysis of these documents presents a highly detailed picture of the rapid imposition of local Seleucid administration by Antiochos III on this previously Ptolemaic region. On the other side of the Empire, L. Graslin-Thomé's review of Antiochos III in Cuneiform sources (211-242) reveals not only a detailed chronology of his reign, but also a snapshot of a local elite in Babylonia that is increasingly Hellenised since the reign of Alexander the Great.

After a general overview of Antiochos' place in Seleucid history, the volume's studies are divided into two sub-regions, namely the Seleucid Near East, and Central Asia. On the former, C. Apicella convincingly highlights the role played by local novi homines in Antiochos III's relationship with Phoenician cities (143-162). A. Ecker et al. provide a richly detailed composite view of various communities in the Southern Levant in the king's time, providing a nuanced and diverse view of the local impact of his reign. On the latter region, L. Martinez-Sève re-examines the archaeological evidence for Antiochos III's impact on Bactria and Sogdiana (271-302), while T. Brüggeman (341-376) overcomes the deficiency of our literary sources with ethnographic of and geographic studies of the Upper Satrapies to chart Antiochos' interaction with partially nomadic tribesmen. A particular highlight was O. Coloru's elegant chapter (303-318) on the ideology, policy, and strategy of Antiochos III's eastern Anabasis through the lens of Sun-Tzu's assertion that military leaders should flow like water, in all of its adaptability, flexibility, and responsiveness. This cross-cultural comparison is all the more fascinating given the Seleucid Far East and the West of the Han Realms begin to overlap with one another.

The volume considered as the sum of its contributions deserves immense praise, and there is a great deal of interest to specialist readers and beyond. The chapters are well-edited, the text is clean, and the volume itself is remarkably affordable at €26,00. Given the erudition of the specific local case studies, perhaps it would have been desirable to have a more robust and synthetic introduction and conclusion framing these specific studies by plugging them back into our broader understanding of this king, this dynasty, and this period. The contributions to the volume collectively provide an intriguing re-examination of the reign of Antiochos III against the backdrop of our older understanding of the Seleucid empire as a whole, and in so doing underscore the need to reconsider that very backdrop itself.