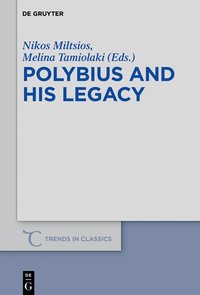 The result of a dedicated conference at Thessaloniki in May 2016, this new edited volume represents an engaging edition to scholarship on Polybius. While some entries are inevitably more successful than others, the overall piece comes together nicely and unites traditional topics of investigation (e.g. cultural politics, didacticism, methodology) with newer approaches to this complicated historian (e.g. encomiastic rhetoric and biography, and reception). Its aim, as indicated in the title, is to offer a snapshot of the present state of Polybius' legacy, and its sections and chapters all therefore represent a piece of this inheritance.

It begins with key themes and ideas, revisiting cultural politics in two enlightening chapters on the lack of ethnic stereotyping in Polybius and the alienation of Rome in his account of the triumphal celebration of L. Anicius Gallus, by Gruen and Champion respectively. [1] Bearzot explores less frequented territory by analysing Polybius' treatment of the western Mediterranean and the Syracusan tyrants beyond his polemic against Timaeus. The study of Polybius' view of the past and the didactic features of his work are represented by the last three chapters in the group: [2] Maier cogently develops his previous work on Polybius' conception of the past by using the scientific concepts of entropy and emergence to clarify the meaning of paradoxon theōrēma; Gibson delves into Polybius' use of praise, a subject often overlooked in discussions of Polybius' didacticism; and Hau returns to the importance of perception and reputation on decision-making in Polybius, expanding on Davidson's observations in 1991.

Part 2 turns to narrative and structural concerns, subjects which have finally received their due attention in recent years. [3] Nicolai reassesses the long-fraught topic of speeches in Polybius, hoping to refocus scholarship on the importance of evaluating speeches for their rhetorical effectiveness and function rather than their reliability. Wiater then asks us to rethink our stance on Polybius' review of the Roman-Carthaginian treaties at 3.21-33, demonstrating that the historian aimed to resolve the 'polyphony' of views surrounding the question of who instigated the Second Punic War and thereby personally contribute both to past and contemporary political discourse; Baron revisits the long-discussed relationship between Polybius and Livy by comparing their accounts of the early years of this war. Khellaf's innovative piece illuminates Polybius' pivotal role in establishing the digression as a feature in ancient historiography.

Part 3 surrounds Polybius' intertextual relationships with his predecessors. [4] Seretaki and Tamiolaki begin by exploring the possible connection between Xenophon's Cyropaedia and Polybius' portrayal of Hannibal. Unfortunately, the piece is not that successful - while it argues for a strong relationship between the two works, it even admits that Polybius' knowledge of Xenophon is problematic and there is the lingering feeling that these similarities come down to the topos of leadership rather than direct influence. Two pieces on encomia and biography then draw us into newer interests: [5] Alexiou offers a chapter expanding on studies of Polybius' distinction between encomia and historiography, using Isocrates' development of encomiastic topoi through epideictic rhetoric to make sense of Polybius' remarks and suggest that he had a thorough knowledge of the rhetorical background of encomia; Tsakmakis takes an innovative cognitive approach to biography and Polybius, noting that his universal history insists on promoting a holistic understanding of historical events so biographical understanding of historical agents is equally just as crucial for the advancement of his readers. Parmeggiani and Scardino then take on the traditional topic of Polybius' predecessors, both persuasively encouraging us to reassess the long-held view that Polybius was a student of Thucydides and his 5th century predecessors, and to look more to his 4th and 3rd century predecessors, notably Ephorus and Theopompus, for direct influence.

The final section explores Polybius' reception from republican Rome to the nineteenth century. Miltsios opens with a cautious chapter on Polybius' influence on Arrian's description of Alexander, but unfortunately suffers from the same suspicions as Seretaki and Tamiolaki; McGing addresses Appian's use of Polybius in his account of the Third Punic War, asking if he inherited his hostility towards Rome in this episode from Polybius. Taking a wider approach, Pausch then suggests that Polybius had a paradoxical impact on Roman writing of the first century BC, encouraging followers of both his own methodology as well as that of those he criticises; Biggs explores how the earlier reception of the Odyssey in Rome might have informed and influenced Roman readers' engagement with Polybius' Histories; and Karakasis unravels Silius Italicus' use of Polybius as a source for his epic account of the Second Punic War, drawing out how multi-layered and complex reception of such a source could be. The final piece takes us forward into the nineteenth century as Pitcher examines how Polybius inspired Oscar Wilde in his essay Historical Criticism but also in a personal capacity as a role model.

One of the problems for edited volumes tackling such a large topic is establishing comprehensiveness and even coverage. Polybius and His Legacy inevitably falls down in this respect. Despite the long list of contributions (21 chapters), certain crucial topics have little presence, for instance, the cycle of constitutions in book 6, Tyche, and universal history. These omissions may reflect, however, the ambitiousness of the endeavour (already at 456 pages), but also the tiredness of scholarship in these areas and a desire to move away from the traditional topoi. There is also a rather narrow focus on the Roman elements of Polybius' Histories, as can be seen from the high frequency of the Punic Wars, Hannibal and Scipio Aemilianus in the collected essays; although Polybius' overarching theme was the rise of Rome he would by no means say that his work was only about Rome (cf. Plb. 1.3 and 3.1-3). Further discussion of Polybius' reception in the more recent past complementing Pitcher on Wilde would also have evened out coverage and fulfilled the legacy brief more fully. The volume also suffers from problems of coherency (the order and categorisation of the chapters is at times odd), from the lack of concluding remarks to indicate the significance of its contents for the field, and from formatting issues (e.g. unexplained gaps in the text). Yet, despite these near unavoidable difficulties, this volume has collated a number of important new studies on Polybius, provided a snapshot of current interests in the field, and done what it set out to do by offering a small taste of the large and still living legacy left by this Hellenistic historian.