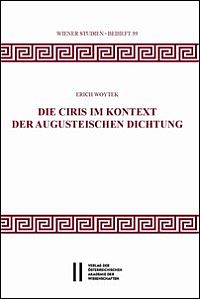 In his monograph Erich Woytek tackles the Cirisfrage - the question of the authorship and the date of composition of the pseudo-Virgilian poem Ciris - and offers a solution: the Ciris was written in 27-26 B.C. by Asinius Pollio. How does he arrive at it?

The Ciris poses a paradox: while the poem's internal features point to a date of composition in the Late Republic, its numerous and often extensive parallels with Virgil may seem to betray a borrower. The debate, initiated in 1901 by Franz Skutsch and reopened in 1999 by Dorothea Gall [1], has mainly concentrated on a comparative analysis of these parallels, on the belief that it is possible to establish for which text a shared passage was originally composed. Initially the main criterion was 'better fit' in terms of meaning, which led Skutsch and Friedrich Leo (Skutsch's main opponent) to the opposite conclusions. [2] Gall introduced a new approach: she asked in which text a shared passage is stylistically more at home, and concluded that parallels are usually more typical of the Ciris' style than Virgil's. Woytek proposes a set of further formal criteria for distinguishing between the original and the imitation and argues that the poem was composed after the Georgics, but before the Aeneid.

Woytek analyses a large corpus of parallels in the Ciris, Virgil, and Ovid (among others) and sketches a kind of typology of the ways in which a borrowed or imitated passage can be recognised as such when compared with its original. The first group of hallmark features includes different kinds of 'multiplication': according to Woytek, the imitator often reproduces (certain details of) his model passage more than once, either in the same or in another context. The second group comprises the ways in which the imitator varies his model on the level of individual words: he often substitutes numerical or quantitative epithets for descriptive ones, replaces rarer words with more common ones, or introduces neologisms. The third group lists various ways in which the imitation is more 'striking' than the model: in terms of content, or expression, or grammar, etc.

While Woytek's treatment of this material is always detailed and penetrating, I have several issues with his typology and its application. To begin with, how representative and unbiased is the corpus of parallels that serves as the basis for Woytek's typology? Though there is no doubt that an imitation can differ from its model in the ways Woytek describes, it is also clear that there are counterexamples: Woytek does not demonstrate that the latter would not outweigh, or at least undermine, his positive examples. Further, Woytek never explains the rationale behind the features he identifies as hallmarks of imitation. While in some cases it may be intuitively apparent (e.g., in the use of 'stopgaps' by an imitator), the assumed consistency of technique implies either a thorough lack of authorial control, or a very striking uniformity of artistic purpose. This brings us to two further points of concern. First, Woytek identifies the same hallmarks of imitation in three poets as different as Virgil, Ovid, and the Ciris author, with only minor variations. This must mean that either he has identified some fundamental laws of poetic imitation, from which neither Virgil nor Ovid could break free, or that their artistic approaches to imitation were essentially the same. I find it hard to believe that either is the case. Second, Virgil's (and Ovid's) self-imitation and imitation of other poets' texts are indiscriminately treated as if the two were the same phenomena. A related issue is that Woytek fails to distinguish between more or less exact 'borrowings' and looser 'imitations': again, there are reasons to believe that poets approach these two interrelated ways of engagement with their predecessors differently. Moreover, less exact parallels often leave room for doubting whether a direct relationship exists between the two contexts or, if it does exist, whether some differences may be attributable to the influence of a third, lost or unidentified, context. Woytek mostly ignores these possibilities, as if pairs of parallel passages otherwise existed in an almost complete intertextual vacuum. Finally, he does not take into account that the text of the Ciris is gravely corrupt. Below I illustrate some of these points.

For instance, Woytek takes the expression studio iactabat inani, shared by Virgil, Eclogues 2.5 and Ciris 208, as evidence of the Eclogues' priority, because the phrase does not make natural sense in the latter context (116). In doing so, he fails to consider the possibility that iactabat is interpolated in the Ciris from Virgil (as I believe it is). Similarly, in comparing Eclogues 8.59-60 praeceps aerii specula de montis in undas, / deferar and Ciris 302 praeceps aerii specula de montis abisses, Woytek sees a sign of Virgil's priory in the fact that the Ciris lacks 'eine Zielangabe wie in mare' and that 'das vom Cirisautor gebrauchte Verbum abire [ist] sowohl unbestimmter als Vergils deferri' (128). But he fails to acknowledge that the end of Ciris 302 is corrupt, abisses being only a conjecture, and he does not seriously consider the likelihood of a lacuna after that line.

When comparing Eclogues 4.49 cara deum suboles, magnum Iouis incrementum and Ciris 398-399 cara Iouis suboles, magnum Iouis incrementum, / Tyndaridae, Woytek argues that the incompatibility of the references to the Dioscuri as cara Iouis suboles and as Tyndaridae betrays the borrower (126). But this argument significantly looses in weight if one takes into account Homeric hymns 33.1-2 ἀμφὶ Διὸς κούρους ἑλικώπιδες ἔσπετε Μοῦσαι, / Τυνδαρίδας. In a comparable way, Woytek takes Georgics 431 rorem late dispergit amarum to be the original and Ciris 516 multum late dispersit in aequora rorem the imitation, because multum is a 'quantitative' attribute that replaces Virgil's 'descriptive' amarum, which moreover is based on a Homeric model, Odyssey 4.406 πικρὸν ἀποπνείουσαι ἁλὸς πολυβενθέος ὀδμήν (134). But as I have suggested elsewhere, Ciris 516 is in fact modelled on Callimachus, Hymns 4.14 Ἰκαρίου πολλὴν ἀπομάσσεται ὕδατος ἄχνην. [3]

As he argues for the priority of Georgics 1.406-409 over Ciris 538-541, Woytek misinterprets Ciris 535 Scorpios alternis clarum fugat Oriona, taking it to refer to 'reziproke Vertreibung der beiden Sternbilder vom Himmel' (137): the line actually refers to Scorpius alternately chasing Orion from the visible and the invisible hemisphere, not to their chasing each other in turn.

All this said, Woytek's readings of individual parallels between the Ciris and Virgil or Ovid are often stimulating and can indeed produce arguments on the dating of the Ciris, as long as these are considered in the framework of other relevant facts rather than as self-sufficient formal criteria. To give an example, I find especially attractive Woytek's discussion of Ovid, Metamorphoses 8.81-82 curarum maxima nutrix, nox interuenit, which he interprets as a playful allusion to the Nurse's role in the Ciris (33). [4]

To sum up: Woytek's monograph is not the last word in the Cirisfrage, but it is inspiring to see that the debate goes on.