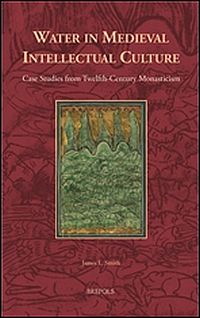 As the title indicates, this book consists of three case studies (chapters 3-5) preceded by an Introduction and two chapters dealing with general considerations on the water metaphor as used in the Middle Ages. The objects of the case studies are works by three authors: Godfrey of Saint-Victor, Peter of Celle, and the anonymous author of A Description of Clairvaux. These cases are well chosen, since they represent three kinds of monasticism (Victorine, Black Monks, and White Monks) and three different genres (Godfrey's didactic poetry, Peter's letter-writing, and the anonymous Cistercian's descriptive narrative). The choice of Godfrey has the particular merit of making this lesser-known author and his work better known.

In his Introduction (4), James Smith lays out four goals for this book. The first, "to examine the link between medieval imaginations of water and practices of thought," is accomplished especially in the chapter on Godfrey of Saint-Victor's poem Fons Philosophiae. The second goal, "to explore and explain the monastic rhetoric in which the properties of water were enlisted to express complex thought," is met most clearly in the discussion of Peter of Celles' correspondence. The third goal, "to use understandings drawn from these investigations to offer new readings of divers texts generated by monastics and Augustinian canons of the twelfth century," is less clear in its intent and therefore difficult to evaluate. The fourth goal, "to provide new insights into the history of monastic thought and our understanding of water in the Middle Ages," is also disconcertingly broad. Another statement in the Introduction (7) provides the reader with a more promising orientation: "The most significant contribution to the study of monasticism that my research aims to make is to improve understanding of the relationship between landscape use and inner life." Given this statement of intent, it is surprising that the author never mentions in the text or in the bibliography Martha G. Newman's The Boundaries of Charity: Cistercian Culture and Ecclesiastical Reform, 1098-1180 (Stanford Univ. Press, 1996), a particularly rich exploration of interaction between inner and outer landscapes.

Having stated four goals in the Introduction, the author concludes the book with a further "three principal points" he wants the reader to take away, adding "If the reader is reminded of anything by this book, then perhaps it will be the paramount significance of pattern and its formative repetition" (178). In case that summary point was not sufficient, we read later in the conclusion: "The vital manifestations of complex water metaphor are diverse in form and function, but each shares the power of ecumenical mediation and facilitation" (179). Clarity of intent and expression is not a strong point of this book.

The rather diffuse focus of Smith's book is perhaps the result of his chosen methodology. As he says in the Introduction, "I have spanned several disciplines. This book is a synthesis of approaches from these constituent parts - history, philosophy, and literary criticism - incorporating elements of all three" (10). Given that the title of the book situates it within the disciplines of medieval and monastic studies, the work suffers from lack of clarity about its audience. This interdisciplinary approach poses fewer problems in the three case studies, because they are anchored in specific texts. Otherwise this mixture of methodologies is more disorienting than enlightening.

The fluidity of topic, audience, and method also comes through in the style of this book. The author deals in so many abstractions that it is often difficult to follow the thread of the discussion. The reader frequently encounters sentences like the following: "The provenance and patterns of reality and the causation of knowledge followed a hydrological pattern because this pattern served to guide the path between principles that enabled a contextual understanding of a larger order" (44). Even within their context, such statements require many re-readings, and sometimes yield no clear meaning.

Some of the terminology employed in the book is likewise unclear in its intent and meaning. The term affordances is used dozens of times throughout the book. It does at least receive a definition: "traits that encourage a form of use over other forms. A chair, for example, has the affordance of seating a human being, despite having many other potential uses" (4). Apart from the question of whether the English language needs such a term, its meaning in the singular regarding chairs is graspable. But since this term is used mostly in the plural about the affordances of water without any further specification, it is simply baffling.

To summarize, then, this work approaches a significant topic through three well-chosen case studies. It adopts an interdisciplinary approach that, if potentially enriching, often takes the book adrift by addressing no clear audience. This study is challenging, sometimes thought-provoking, occasionally informative, but too often incomprehensible.