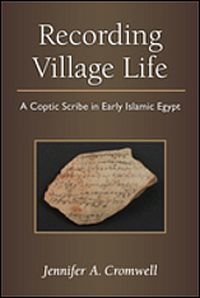 Jennifer Cromwell has established herself as an authority on all aspects of the scribal culture of late antique and early Islamic Egypt, as the breadth of her own publications in this book's bibliography makes clear. These publications, covering a wide variety of subjects, documents and individuals, support the subject of this book, showing how the works and life of one individual scribe active in Upper Egypt can enlighten historical processes underwriting Arab rule in Egypt, including administrative and social developments, because they are in fact interconnected. Cromwell's uniquely holistic approach to the documents is a tour de force, combining content - including prosopography, social and administrative history - materiality and orthography. By combining historical data with comparative perspectives from geriatric studies and other scribal cultures, Cromwell offers important methodological insights, as well as precious new information on a transitional period in early Islamic history.

Cromwell's main interest is how documents worked: how were they produced, by whom, in what circumstances and to what effect? She uses the documents related to one otherwise anonymous scribe to answer these questions. Aristophanes worked in the Arab fiscal administration and for private individuals in the town of Jeme, near modern-day Luxor, ancient Thebes, from ca. 730-750 CE. He played a role as scribe, amanuensis or witness in 142 preserved texts. Written in Coptic, with some Greek, on papyri and ostraca, they mostly relate to taxes, but there are also several long legal documents. Cromwell meticulously examines each detail of the documents related to Aristophanes, discussing individual letter shapes, phrases and texts, formulae, the names, background and writing skills of witnesses and scribes, the material used (pot sherds or papyrus) and in which administrative context it occurs (ch 3).

Thus Cromwell reconstructs two major parts of Aristophanes' world - his life as a scribe in the Arab administration (ch 4) and his work producing or facilitating legal transactions in the village (ch 5) - which she integrates in the concluding chapter into an insightful discussion connecting one man's experiences to social and administrative-political developments in eighth-century Egypt (ch 6). Aristophanes' career spans a period of intensive administrative and social transition. The documents contain few direct references to Arab rulers, but Cromwell manages to reconstruct a detailed picture of their administrative remit. From around 700 CE fiscal administration in Egypt intensified under a new class of local Arab(ic) administrators. Administrative scrutiny increased as did the paperwork that supported and recorded it (123). Egyptian scribes were hired to support the increased administrative activity and they do so for the first time in Coptic (9-15). Aristophanes' career as well as that of his brother Johannake, and possibly that of his son, Leontios, is a direct product of this development. In the Arab district offices new documentary practices, following Greek ones, developed and Cromwell shows how Aristophanes was responsible for introducing the formulae that he was trained to use in the district's office in Jeme (164-66). From 730 onwards Coptic is dropped by the Arab administration, which continues in Greek and Arabic, leaving Aristophanes without a public job. As a result he switches to serving the village community, introducing administrative formulae and practices he had learned in his previous role (183). Another wave of administrative changes around 750 cut out the village scribes entirely as tax receipts and demand notes ceased to be produced at the village level, where the lump sums imposed on communities by the Arab administration were divided. Instead this was done at the district office (179).

Cromwell's meticulous examination of every detail of her documents offers insights into (legal) documentary practice: differences in handwriting indicate that multiple scribes were involved in the production - writing or correcting - of a text and show Aristophanes' deteriorating penmanship at the end of his life (3.2); while from the presence of witnesses, scribes, and officials and their background we can see where texts were produced (3.4). She does not always manage to offer a full explanation of what she observes, but by posing questions such as what is meant by the mentioning of the scribe's name and signature on a document, or what is the pattern in the signing by literate witnesses for illiterate ones, Cromwell makes us see documents with new eyes. An interesting next step would be to compare these issues in contemporary Arabic documents, since the many edited Arabic tax receipts and legal documents display many of the same features.

Papyri and ostraca provide hugely important historical material, but they also have some disadvantages: their fragmentary state of preservation history, both individual texts and corpuses; their skewed view, mostly reflecting only one side of a case or conversation; and the anonymity of the individuals appearing in the texts, whose activities can rarely be corroborated by additional sources. In short these texts offer uniquely direct and diverse information on daily life activities, but as they were never intended to be preserved and were not kept in archives, this information is always incomplete. For all the information preserved, there is as much again lost. Any argument based on the papyri has to take this into account. Conversely, conclusions based on the absence of papyrological evidence come with considerable risks. Cromwell is very much aware of this limit to her material, applying in her analyses and reconstructions, "a certain level of fiction, but fiction that fits the content of the surviving documents" (154). Still, sometimes the reconstruction covers the fragmentary nature of the evidence to such an extent that unspecialised readers might be unaware off. Does the disappearance of written material from Jeme imply a historically significant explanation, or is it merely an accident of preservation (9)? The graph showing the distribution of tax receipts throughout the year assumes that the corpus presented as such consists of all (or at least a majority of the) tax receipts produced that year (p. 42 and fig. 4.1 on p. 97). Can we be sure that the two 'bickering' sisters' troubles were over because there is no documentary attestation of their continued disagreement (139)? Can we assume that Aristophanes' son Leontios cannot be designated an accomplished scribe because the one preserved sample in which he writes his name shows him to have a poor hand (161)?

The book is beautifully produced with multiple images with cut-outs illustrating the fine points of letter shapes and words, comparing examples of handwriting and full images of the ostraca, which are newly edited in Appendix 2. Coptic and Greek phrases and words are systematically translated, helping to make the book accessible to non-specialists. The documents found in Jeme were already edited some 100 years ago, but have hardly been used for analytical purposes. Endlessly and creatively squeezing her documents, Cromwell shows what can be learned when the right method is applied. She brings out unexpected insights about the daily life of inhabitants of a small Egyptian village, using them in exciting ways to draw out larger developments in early Islamic Egypt. She is to be warmly commended.