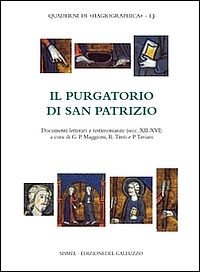 St Patrick's Purgatory, situated on an island in Lough Derg in County Donegal in the north of the present-day Republic of Ireland, was a very unusual pilgrimage site in the Middle Ages. Rather than visiting a shrine containing a saint's bones or other relics housed within a church, persistent pilgrims were admitted to an underground space where they were shut in for the night and could expect to be vexed by hordes of demons and see the torments of those in purgatory, but, if they survived, might be rewarded with a visit to the earthly paradise or even a glimpse of heaven.

The founding text of St Patrick's Purgatory is the Tractatus de Purgatorio Sancti Patricii of the monk "H" of Sawtry, printed here (3-85), along with an extensive commentary (XIII-CVIII). The Tractatus describes the visit of the Irish knight Owein to the site during the time King Stephen was reigning in England (1135-54), as recounted to the author of the text by Gilbert, abbot of the Cistercian monastery Basingwerk in north Wales, who had heard it from Owein's own mouth when he was visiting Ireland.

Owein's underground experiences include assaults by demons, from which he protects himself by saying the name of Jesus, a journey through dark and fiery fields where souls suffer various torments, such as being fastened to the ground by red-hot nails or suspended in flames by hooks in their hair or their genitals, and a perilous passage over a narrow, slippery bridge with a fiery river below. He survives all this and finally makes his way to a beautiful walled garden, where he is met by a procession of the saved, inhabitants of the earthly paradise. They explain to him, "the penance imposed on us before death or on the point of death, which we were not able to complete in our lifetime, we pay by suffering torments after death in the penal places (in locis penalibus) you saw, some for a longer time, some for a lesser, according to the nature of their sins" (58). For Jacques Le Goff, analysing "the birth of purgatory", the Tractatus "occupies an essential place in the history of Purgatory, in whose success it played an important, if not decisive, role". [1]

The text of the Tractatus survives in at least 150 manuscript copies and, although there are several modern printed versions, notably by Karl Warnke in 1938 and Robert Easting in 1991 [2], the editors of the volume reviewed here emphasize the absence of "a critical edition of the text" (XVI). They reprint Easting's edition, with Italian translation. However, although the critical edition remains a desideratum, Maggioni's 96-page analysis of the Tractatus is very valuable, dealing with the structure and development of the text, the prior history of the concept and geography of purgatory (with extensive citation of texts, all provided with Italian translation), and parallels with earlier visions of the Otherworld, although the Tractatus, in contrast, presents Owein's experience, not as a vision, but happening in the body. The corporeal nature of what he undergoes is indeed one way that the text prefigures Dante's Comedy.

In addition to the text of the Tractatus, this volume contains excerpts from a dozen writers of the late twelfth, thirteenth and fourteenth centuries who mention St Patrick's Purgatory, some of whom knew the Tractatus, some of whom did not. The earliest of them, Gerald of Wales and Peter of Cornwall, wrote very soon after its composition. A few of these texts, such as Vincent of Beauvais' Speculum historiale and Jacobus de Voragine's Legenda aurea, were widely diffused, and thus knowledge of the site became almost a commonplace of the learned world. Vincent is dubious about the Tractatus for suggesting that saved souls spend time in the earthly paradise before proceeding to heaven, since "no one should believe that there is an intermediate place for souls between purgatory and the heavenly paradise" (156). Over the course of time, additions and adaptions were made to the tradition, notably the idea that those who emerged successfully from the experiences they underwent never smiled again, while Jacobus de Voragine's version replaces the exotic personal name Owein with the more acceptably Italianate Nicholas. Not included in the volume reviewed here are any of the vernacular adaptations of the Tractatus, which were numerous, including one by the celebrated poet Marie de France.

The volume also contains thirteen accounts, either in full or in extracts, of actual pilgrimages to St Patrick's Purgatory, from the mid-fourteenth to the late fifteenth century. Pilgrims came from Hungary, Germany, the Netherlands, France, Catalonia, Italy, England and Ireland itself. Some visitors had the same experiences as Owein, the protopilgrim, but others were disappointed. At the end of the fifteenth century William Caxton reports having spoken with a canon of Waterford who had visited the site five or six times but "he saw nor suffered no such things" (412). Others had the full experience and it is interesting to note that the demons kept up-to-date, varying their tactics. When George of Hungary entered St Patrick's Purgatory in 1353, the wicked spirits encountered him in the form of Dominican and Franciscan friars, who boasted of their theological credentials and explained that theories of the Incarnation and Resurrection were quite false (234-8).

This volume will naturally be of especial value for Italian readers without Latin, since all source materials are translated into Italian (except of course those in that language), but it will be very useful for anyone interested in the topic. It is particularly helpful to have the accounts of actual pilgrimages gathered together. Of course this is not a complete anthology of all relevant texts - that would require many volumes - but it is an extremely valuable collection of material about this extraordinary medieval pilgrimage destination.