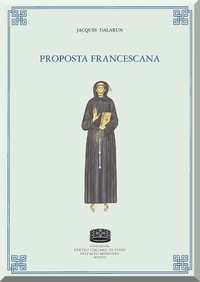 This welcome collection of French, Italian and Latin essays by the famed French scholar, Jacques Dalarun, is divided into two sections, with the first dedicated to Francis of Assisi and his writings (four articles) and the second focuses on selected biographical legends of the saint (thirteen articles). The variety of these studies serve as an invitation to the workshop of a master, whose incredible erudition and creative engagement with manuscripts and memory is prized by scholars around the world.

As is common in collections such as the Proposta Francescana, readers obviously may scan the table of contents for titles that intrigue them and/or are integral to their research projects. Another approach would be to identify key articles in each section and utilize them as points of departure for exploring other articles. For example, in the first section, Su Francesco e alcuni suoi scritti, readers find the essay, François pris au mot: À propos de la nouvelle édition de ses Scripta where Dalarun reviews Carlo Paolazzi's 2009 edition of Francis's writings. His analysis of Paolazzi's efforts provides insights into the cultural-linguistic aspects of Francis's literary production while illustrating the craft of constructing a critical edition.

Readers could then turn to those articles that capture Dalarun's interest in Francis's relationships with his companions. "Sicut mater": Una riletura del biglietto di Francesco d'Assisi a frate Leone exemplifies the aforementioned erudition and creativity of the French scholar. Attilio Bartoli Langeli's paleographical study of A Letter to Brother Leo prompted Dalarun to examine this precious relic from Francis's own hand. What he uncovers is a maternal manifesto, grounded in the intimate humility and mutual acceptance of two brothers that overturns patriarchal hierarchies and with them, the prevailing pastoral paradigms of power.

Two other intimate moments in the life of Francis, the stigmata and the final blessing of the brothers, are taken up by Dalarun in Renovata sunt per eum antiqua miracula and in La dernière volonté de saint François. The first probes the mystery of the stigmatic Francis, whose body revealed what many believed to be marks of the Crucified Christ. This mystery was first shared within an intimate group only later to be confirmed by many, including Pope Gregory IX. Through an engaging reading of the sources, Dalarun presents the stigmata as an appeal to an enduring motif in Christianity. The sources proclaim the novitas of Francis, who while appropriating the apostolic model moves beyond the sequela Christi to the imitatio Christi model that impacted the theory and praxis of Christian spirituality to this day.

Dalarun's treatment of Francis's final blessing in La dernière volonté de saint François examines another intimate event. Writing in honor of Raoul Manselli, Dalarun notes the scholar's conviction that the blessing is among the most disquieting episodes in the life of the Poverello. While Thomas of Celano speaks of Francis's benediction in relationship to Elias, other hagiographers, identified with Leo and the early companions, removed him in favor of Bernard of Quintavalle. Not surprisingly, this demarcation reveals decidedly ideological determinations. For Dalarun, the question of Francis's ultimate will, crystalized in the final benediction, remains obscured by the variety and verbosity of the source material. Nevertheless, he argues that historians can posit a double blessing (Elias and Bernard) and general benediction of all the brothers at the Portiuncula in the last few days preceding the passing of the Poverello.

While the first proposed essay is crucial to understanding the sources related to the life of Francis of Assisi, the second, Comment détruire les légends franciscaines?, is arguably the most fascinating in the entire volume and the gateway to understanding Dalarun's current interest in the intersection of legend and liturgy. The issue is the ordinance of the Minorite chapter of 1266 to destroy all the legends of Francis that were in circulation before Bonaventure's Major and Minor legends. Destruction of earlier legends risked the erasure of memories and, practically speaking, the mutilation of breviaries which contained the readings for the Transferal and Feast of Saint Francis drawn from earlier sources. Dalarun offers readers a detailed treatment of the delicate nature of this challenge when he turns to the manuscript Reg. Lat. 173 in the Vatican Apostolic Library. This breviary, which reflects the liturgical renewal of 1244, preserves the Office of Julian of Speyer and the necessary rubrics but evinces the erasure of an earlier legend and the substitution of readings from both the Major and Minor legends of Bonaventure.

The erasure of memory, both literally and figuratively, is emblematic of the discussion regarding what Dalarun delineated in François d'Assise au miroir de la liturgie in 2015 as the historical Francis and the Francis of history. In Tommaso da Celano, autore della questione francescana, he enters this debate within the context of the "Franciscan Question." Here Dalarun clarifies how Thomas of Celano's perspective on Francis dominated the period leading up to removal of the Minorite General Elias of Cortona in 1239 and how an array - or perhaps a cacophony - of legends and perspectives emerged thereafter only to be muffled, but not silenced, by Bonaventure's Major and Minor legends. Les prologues des légends franciscaines surveys the presence of this literary device between 1229 and 1263. Once considered superfluous, Dalarun argues their intertextuality opens a window on the Minorite effort, inside and outside the canonical confines of the institution to define and redefine their founder and with that, their own history.

The richness of this volume is undeniable. Precisely for this reason, the lack of an index is disappointing. This tool would allow readers the pleasure of a systematic study of the themes dear to Dalarun. That said, readers owe a debt of gratitude to the publisher for making this wide-ranging collection available. Beyond the academic erudition and artful creativity of the author, what strikes this reviewer is Dalarun's gracious dialogue across a broad spectrum of cultures and scholars, both living and deceased. Clearly, to be in the workshop of this master is to be treated not like an apprentice, but as a treasured colleague.