Thomas A. Schmitz / Nicolas Wiater (eds.): The Struggle for Identity. Greeks and their Past in the First Century BCE, Stuttgart: Franz Steiner Verlag 2011 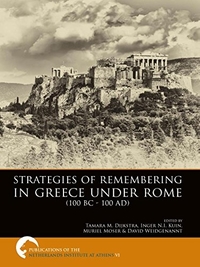 The introduction to this handsomely produced collection of papers from a 2016 conference begins inauspiciously for the reviewer. Athens was not "incorporated into the province of Achaea" by AD 100, remaining a free city. Next a distinction is made between scholarly work said to characterise Greece (1st centuries BC-AD) as a time of "decline, of crisis, or, more generally, weakness" (among which my 2012 book is listed) [1], and the "revisionism" said to be evident in a second list of outputs "pointing to the cultural vitality and the persistence of traditional forms of power and networks of influence" at this time. In the reviewer's opinion this formulation, quite apart from diminishing at least some of the work which it cites, introduces a misleading dichotomy - as if "weakness" and "cultural vitality" cannot coincide, or the one be a function of the other, and so on. Intellectually it seems questionable whether "declinism" itself as a lens for viewing Greece in this period, with its long history in both ancient and modern writings, can just be set aside like a discarded fashion, as here.

Part I ("Building Remembrance") begins with six co-authors offering "critical remarks" about "cultural memory" as a theorised approach applicable to Roman Greece. There are reminders that cultural memory operated both in pre-Roman Greece and in other parts of the Roman empire (of the other hellenophone provinces, only Macedonia is sampled), that "intentional" remembering is not always easy to identify in the material record, and that "mnemonic behaviours" were not the preserve of the elites, although getting at those of the "non-elite population" is especially difficult. The methodological pitfalls highlighted by this paper are not always avoided by its successor, T. M. Dikstra on colonial Patrae, who asserts (rather than argues), using the text of Pausanias composed nearly two centuries later, that Augustus was himself the agent of a "strategy" of using cult to unite the mixed population of the colony (an aim claimed as successful). She then suggests that colonial tombs on the main road to Corinth "engaged with" the pre-colonial elite, by a usurpation of an older burial ground, probably preceded by "clearing" older graves (if a "strategy," then one of forgetting, perhaps, not "remembering"?). C. de Grazia Vanderpool and P. D. Scotton discuss colonial Corinth's "Julian basilica" fruitfully. They note its architecturally domineering character (with a reconstructed rooftop almost at a level with that of the Archaic temple of Apollo) and likely design-input from Italy, and how it helped to create an architecturally "blended" space seen here as characteristically Roman (recalling e.g. the Athenian Agora after Augustan-period embellishments). Blended too in the Augustan manner were the styles of the imperial statuary found inside, with models including not just Polycleitus but also, as they argue, Greek statues of generals. Too late for this paper, but relevant to the supposedly "narrower" impact of the interior setting, is the evidence gathered by W. Eck (ZPE 206 (2018) 3-19) for basilicas as major places of public resort and full of loiterers.

Part II ("Competing with the Past") starts with a thoughtful and well contextualised study by B. Eckhardt of the organisational nomenclature of private associations in Roman Greece, which, he argues, displays conscious archaism ("maenads" in Macedonia, seemingly inspired by literary traditions; "orgeones" and "eranistai" in Athens, etc.), which need not be "cultural resistance" to Rome, rather than a regionally-distinctive accommodation of the "imperial framework surrounding private corporate organization". Z. Newby carefully tracks the long history of the boating activities of the Athenian ephebes commemorating Salamis and their evolution from a race or regatta (Hellenistic) to a mock battle or naumachia (from the late 1st century AD but possibly Augustan) in which ephebic crews manned miniature war-galleys equipped with rams, as vividly depicted on reliefs. The likely Romanity of this changed emphasis is recognised (the increased violence compares with that of the Spartan ephebate in the same period), and Newby plausibly suspects the Augustan naumachia replaying Salamis in Rome as an inspiration (surely not the other way round). Closing this section L. del Basso offers an interesting interpretation of the importance for the civic identity of colonial Corinth of its hosting of the Isthmian games, albeit speculative - she admits that the archaising reintroduction of crowns of pine could have happened in the Sicyonian phase of the games, about which nothing is known.

Part III ("Honouring Tradition") begins with two papers (J. Fouquet and C. Dickenson) both exploring the significance of spatial context in the siting of public monuments (Fouquet considers intra-city burials at Roman Messene, Mantineia and Argos, Dickenson portrait-statuary at Roman Messene alone). Valuable suggestions are made, although there is also a fair amount of speculation. Since Messenian prosopography is exploited in both papers, it needs emphasis that use of the name "Aristomenes" may imply, but hardly proves, a Messenian family's claim to descent from the Messenian hero; also the good case for seeing the Aristomenes-Dionysius and Saethida families, who are portrayed here as rivals, as inter-related (see now D. Baldassarra in Meletemata 74 (Athens, 2017) 195-209). D. Weidgenannt offers an acute discussion of the language of euergetism in Roman Greece, showing how civic honours sought to pressurise elite-families into further giving in the future by presenting their euergetism as a cross-generational continuum - hence e.g. the practice of extending honours such as proedria to a benefactor's descendants.

Part IV ("Past and Politics in Athens") starts with I. Kuin's re-examination of the difficult ancient evidence underlying the modern controversy over whether or not Sulla imposed constitutional change on Athens. If she is right to see mention of the Areopagus in Agora I 2351, a fragmentary decree with a prominent place in the debate, as evidence for an attempt to frame such change as sanctioned by Athenian tradition, it is arguable that the text reflects Sullan thinking (not Athenion's, as Kuin proposes), given the high reputation of the Areopagus in 1st-century BC Rome (see E. Rawson, Athenaeum n. s. 63 (1985): i.e. the target audience for this "anchoring" (Kuin's term) could have been Roman as much as, or more than, Athenian. M. Moser imposes her own interpretation on the Athenian practice of re-using old bases with their statues to honour Romans, seeing this as evidence of the "dynamism of local politics in [Roman Athens]," here claimed as "democratic" (on this notorious phenomenon the reviewer was more persuaded by A. Lo Monaco in M. Melfi and O. Bobou edd., Hellenistic Sanctuaries Between Greece and Rome (Oxford 2016)). He must protest - a second time - at the misrepresentation of his 2012 book, here claimed as presenting Roman Athens as "engaged in (cultural) resistance against Roman dominance". The exact opposite is the case: short of reading the book, see e.g. the review article by R. Osborne, New Left Review 77 (Sept.-Oct. 2012) 105-120.

Setting aside the book's hyperbolic claim to "revisionism" (repeated in the conclusion), this collection of varying quality includes a number of substantial contributions to the aspect of Roman Greece under study. As for methodology, those contributors who are resistant to the traditional idea that Greece was "weak" in this period need to define their terms. Another difficulty is that sometimes the same evidence could be taken either as "cultural resistance" to Rome or as local behaviour concessive to Roman attitudes. Here too a clear laying out of modern presuppositions is desirable (as the first paper by the six co-authors seeks to do). Finally, speculative interpretation does not necessarily advance the study of Roman Greece (or anything else). Those contributors who frankly acknowledge the uncertainties of the evidence, and who make an argued case for the merits of their approach (e.g. Eckhardt), deserve praise.