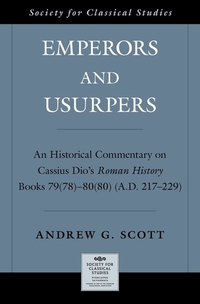 It can no longer be said that Cassius Dio is an understudied historian. The last decade or so has witnessed a surge in scholarly attention devoted to the senatorial historian from Nicaea not seen since the nineteenth century. This attention is justified. Dio is not just an important 'source' for much of Roman history (this has never been disputed), but he is also an interesting writer (something not, it is fair to say, generally accepted in the last century).

Scott has recently taken over the editorship of the Dio Project from Michael Swan. The project's aim is to provide historical commentaries on all eighty books of Dio's history. Scott's contribution marks the fourth commentary in the series, joining those of Meyer Reinhold (1988), C.L. Murison (1999), and Michael Swan (2004). It is hoped that more will follow before too long.

The commentary genre is well-suited to Dio's Roman History. Vast, occasionally unwieldy and imperfectly transmitted in the manuscripts, Dio's history provides challenges, not only to the ingenuous. A commentary should provide the means for unpacking the contents of Dio's narrative, while providing the opportunity to relate the part to the whole. Scott's commentary meets these expectations and makes a worthwhile contribution to scholarship.

Scott has tackled the last books of Dio's history which cover the years 217 to 229. The years witnessed considerable upheaval in the Roman world: the assassination of Caracalla, the accession of the equestrian Macrinus, then the regimes of the adolescent emperors Elagabalus and Severus Alexander. We are fortunate that some of Dio's original narrative for this period has been preserved, albeit in mutilated form, in Codex Vaticanus gr. 1288, alongside the Epitome of Xiphilinus and the extracts from Dio's history contained in the Excerpta Constantiniana. Even in its imperfectly transmitted state, Dio's narrative of this period is an angry reaction to this world, while also a clever exercise in his own self-fashioning.

This commentary began life as an appendix to Scott's Rutgers PhD thesis. Happily, Scott has many of the virtues of a good commentator and he generally avoids the vices of a bad one. As a writer, Scott is clear and concise. He demonstrates a broad familiarity with the scholarship on the history of the period and his bibliography is up-to-date. Moreover, Scott's commentary is sympathetic to the literary aspects of Dio's history, more so than some of the earlier contributions to the series, which reflects the broader changes in approaches to Dio in the thirty years which separate Reinhold's commentary from Scott's.

Scott's commentary comprises two parts. The first, the introduction, provides an overview of Dio's career, the text of the Roman History, some characteristics of Dio as a historian, and a discussion of the history and historiography of the reigns of Macrinus and Elagablus (17-23). These opening sections contain many good observations and Scott provides sound arguments for a 'late' dating for the Roman History (10-14), as well as a compact yet insightful discussion of Dio's conception of human nature (7). Somewhat strangely, Dio's account of Severus Alexander misses out the same level of treatment as given to his imperial predecessors in the introduction. This is a shame as Dio's account of Severus Alexander, brief and idiosyncratic though it is, is less flattering than what we might suspect of a text completed under that emperor, and is very different in tenor from the accounts of Herodian and the Historia Augusta.

The second section is the commentary proper, which is subdivided into the reigns of Macrinus (Book 79(78)), Elagabalus (80(79)), and Severus Alexander (80(80)). Unlike the earlier volumes in the series, there are no appendices. The commentary includes Greek lemmata followed by an English translation and commentary. There is a strange tendency for the Greek lemmata to include just one word, even though the text covered in the note may cover a sentence or more, so the reader is dependent on the translation to appreciate the scope of each note.

The focus of the commentary is primarily historical, and serves to elucidate general historical developments rather than specific points of detail. At times there are good discussions of problematic passages, particularly where the imperfect preservation of Codex Vaticanus gr. 1288 has rendered some of the Greek unintelligible (e.g. 39 discussing 79(78).5.5-6.1). Scott also offers a sound resolution to the problem of the identity of Gannys/Eutychianus (86-7).

Occasionally, one wishes that Scott would be more assertive on some points. For example, when commenting on the strange episode of pseudo-Alexander (142-3), Scott presents two opposing views, those of Millar and Bering-Staschewski, favouring the latter, only then to offer a qualification to this judgement without taking it any further. Also, more surely could be said about Dio's self-fashioning and presentation of his own career during the last portion of the work, where, as Scott observes rightly, 'Dio himself enters the narrative in a greater way than before'.

There are, however, a few blemishes on what is otherwise a sound book. Scott is clearly less interested and therefore less secure when it comes to some issues connected to the transmission of Dio's history. For some historians, this would not matter, but for Dio's narrative, which has been reconstructed from a variety of authorities, it is more problematic. To Scott's credit, he notes the provenance of each passage of Dio's work which has not been preserved in the direct MS tradition. These textual matters are dealt with summarily in the introduction (2-3), but not always accurately.

These problems continue into the commentary. For example, Scott notes (144) that a particular passage (80(79).19.1a) is the 'final excerpt of the Excerpta Vaticana from Dio's history', where he means, the final excerpt from Petrus Patricus (preserved in the Excerpta Vaticana) derived from Dio's history. Other points of textual interest are left undiscussed. The story of Elagabalus' intention to have a sex-change operation (a story found in Zonaras and attributed to Dio by Cedrenus) provides a rare exception to the general rule that Zonaras followed Xiphilinus for his post-Nervan narrative, and thus raising questions about Zonaras' sources and method of composition for this part of his Epitome of Histories.

The book has been well copy-edited and errors of that sort are few. Occasionally there are minor slips. For example, on page 33 the individual nicknamed 'Castor' is Drusus, not Tiberius.

These issues aside, Scott must be congratulated for tackling such an important and difficult portion of Dio's history. His work on these final books of the Roman History provides an indispensable companion to any historian wishing to investigate the later Severan period.