Emma Dench: Romulus' Asylum. Roman Identities from the Age of Alexander to the Age of Hadrian, Oxford: Oxford University Press 2005

Emma Dench: Empire and Political Cultures in the Roman World 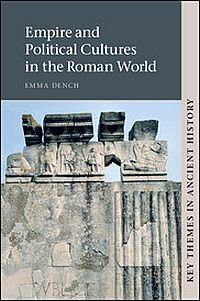 Emma Dench's Empire and Political Cultures in the Roman World is a marvel: thrillingly precise, forbiddingly clear, and soberly polemical. I recommend it without reservation. Dench has set out to write a broad, emic survey of what she refers to as "change attendant on empire": that is to say, how the social and practical realities of life in the Roman Empire were altered by contact with that empire and its ideas.

Empire has been published as part of CUP's Key Themes in Ancient History series, which generally aims to explore basic topics in a fashion legible to nonspecialist audiences (e.g. Sitta von Reden's excellent Money in Classical Antiquity [2010]). That said, in our world it is important to get empire studies right; Dench consciously destabilizes traditional paradigms of 'Romanization' in favor of a more complicated and accurate framework. Specifically, Dench marshals evidence throughout the Roman world to show that, rather than a unitary phenomenon, empire looked different everywhere and for everyone. Readers familiar with the series may find Empire's ideas and prose more challenging than expected, but the subject requires such subtlety, and the book richly rewards it.

In discussing the melting pot - or salad bowl - that was the empire, Dench contributes to a thriving literature on what would once have been called Roman acculturation but is now something rather more complex. An enormous volume of work on Greek experiences of Roman power by Lisa Eberle, Erich Gruen, Adam Kemezis, and Sailakshmi Ramgopal has shown how imperial Greek identities were not so much hybrid as different; as altered by and engaging with Roman power in idiosyncratic ways. This work has been extended into the West by figures like Clifford Ando, Carlos Noreña, and Greg Woolf, who have reconceptualized Roman imperial power as a symbolic vocabulary, consisting of shared tropes of consensus and humanitas employed by figures on both center and periphery for purposes too personal to subsume within rigid schematic frameworks.

These recent histories of Roman imperial ideology (leaving aside for now the difficulty of defining 'imperial,' 'ideology,' and for that matter 'Roman') show an empire undergirded by violence but extending far beyond what that violence could support: a language of power that was not so much imposed on different actors as made available for their own reception, engagement, and refashioning. The last fifty years have seen the justified collapse of hegemonic models seeking to explain how "provincials" felt and acted; the "globalization" (as Dench calls it, [14]) of the Mediterranean affected everyone - including those in Rome - differently as they orientated themselves within Aelius Aristides' imperial 'world city.'

This is the world within which Dench writes, and that she shows to better map onto ancient history than old ideas of Roman 'defensive' or 'civilizing' imperialism. She does so in broadly thematic fashion; after an extensive introduction to contemporary historiography on imperial themes, Dench considers how people experienced Roman empire in a variety of different settings. The work begins with a fairly straightforward examination of imperial symbology, which usefully condenses that daunting scholarly genre into a few case studies stretching from 1 Maccabees to the reign of Zenobia. From there, Dench travels to the imperial frontier, which she uses both to explore the effects of empire on the organization of space - a theme which recurs frequently in the book - and to emphasize the irregular deployment of imperial power that created what she calls "hotspots of Roman state presence" (56). Dench then considers the effects of empire on the economy (and vice versa), as trade increased and fantastic wealth entered into Italy and beyond. Dench then returns to military matters in a chapter on state violence before finally discussing how empire changed individual and civic conceptions of time.

If this sounds a bit incoherent, it can be; Empire is a short book with a big mission, and Dench's commitment to exploring so many facets of imperial culture can cause whiplash. But Dench's breadth is necessary; a system of thought, habit, and trade (all backed up with lethal forces just behind the curtain) is simply too vast and complex to consider from only one angle without producing a hopelessly distorted view. The patchwork of identities and stories contained in Empire is daunting, but accurate, and richer for being so.

To the extent that criticism could be lodged of the book, it may be that Dench has argued her topic out of existence. I finished this book convinced of Dench's claim that there was no one 'Roman imperialism,' which raises the question of what purpose it serves to hive off a subset of Roman lived experience as worthy of its own specialized study. Dench's case studies do not look very much alike, and I remain unsure whether inhabitants of the imperial societies she explores would have understood them to belong in the same conceptual framework.

In a world where ahistorical ideas of Rome and its provinces underlay colonial projects all around us, though, this may be a feature rather than a bug. Dench shows us how Rome and its power felt on the ground, and in doing so demonstrates the poverty of those totalizing models of 'empire' that a reader might initially expect to see.

Empire and Political Cultures in the Roman World is a curious, provocative book. Personally, I would not assign it as an introduction to its field; it requires prior engagement with the subject. However, any historian looking for a sophisticated approach to Roman political hegemony need look no further. Empire distills Dench's expertise in Mediterranean identities into a clarion call to accept that empire's inhabitants for who they were: engaged with both periphery and center, part of communities both large and small, and worthy of understanding as far more than pawns in the games of famous men.