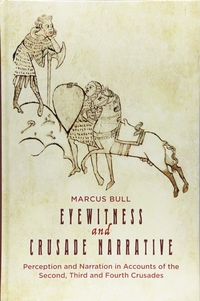 Recent scholarship has reevaluated the utility of once-marginalized narrative and poetic texts as testimonies of the creation and evolution of crusading identity. Now Marcus Bull offers a more nuanced approach to narrative texts long touted as exemplars of the "eyewitness accounts" privileged in histories and historiography textbooks as best enabling modern readers to comprehend and empathize with those long dead. After all, surely authors of eyewitness accounts were more empirical and trustworthy witnesses to historical events than authors reliant on others' testimony? In contrast, Bull draws on film studies, modern literary theory, psychology, and the legal and forensic treatment of eyewitnesses to address several crucial questions, including: how can significant clusters of texts from the Second, Third, and Fourth Crusades be examined for their conscious construction and function as "eyewitness" narratives, as authorial experiments in mimicking the subjective texture of vivid recall through merging the eyewitness memories of the author with the accounts of others? This is not to succumb to the postmodernist gospel that "reality is nothing more than an artefact of language"; Bull stresses that within the parameters of their culture(s) and despite inevitable slippages of perception and memory, medieval authors attempted to "tell it like it was" (345).

Albeit indirectly, most western medieval historians harked back to assumptions set by Greek writers. History was a form of inquiry or observation; book learning and personal firsthand experience informed authorial evaluation of prized eyewitness testimony. Yet medieval historians were painfully aware that to write about public affairs or to cover a wide geographical or temporal historical range they must rely on a panoply of sources: written texts, the oral testimony of trustworthy persons (elaborate ranking systems for credibility were established), institutional memory, traditions, even common report. Informants were often treated as "autoptic surrogates", as extensions of the author. However, an insistence on autopsy proved largely irrelevant for some works, such as universal chronicles. Learned authors such as Guibert of Nogent and Baldric of Dol, immersed in liturgy, textual communities, homiletics, and confession, clearly viewed hearing and reading as more secure routes to insight into human motivation and spiritual truth than the potentially erroneous eyewitness accounts of the first crusaders privileged by the anonymous Gesta Francorum (30-1). Most medieval texts did not privilege the author as a persistently present character or agent in the narrative's storyworld, with the exception of those where eyewitnessing was crucial - regional traditions, wonders, miracle stories, and events (including crusades) where the authors participated in and bore witness to collective experience.

Claiming that "there is more to be gained from an examination of the workings of the texts themselves than there is from trying to recreate the circumstances in which a historical actor might have witnessed events in the real world" (46-7), Bull therefore turns to narratology to contribute to an already flourishing field of scholarship which treats historical works as cultural artefacts articulating discourses in which history informed and was informed by hagiography, theology, eschatology, prophecy, and poetry. Narratological analysis, he argues, can help historians eschew biographism, a circular logic which has long informed readings of key crusading texts such as the Gesta Francorum, whose perspective and style has long and erroneously been attributed to its author's identity as "simple knight" and vice versa. Such fallacies can be avoided by focusing on how authors tell stories and construct meaning, by distinguishing between the author as historical agent, as author, as character, and as narrator.

Then one must consider focalization. To what degree does the authorially constructed narrator have access to the storyworld? Is the narrator omniscient or omnipresent or is the action presented in a deliberately non-interpretative manner (like a panoptic movie camera), forcing the reader to make inferences? Do narrators project their own eyewitness memories onto third-party characters, co-opting them as surrogate focalizers of the storyworld? This temptation must have been particularly present in the case of complex, collectivized, and prolonged series of events such as crusade campaigns. The author also constructs the stage(s) and events which the reader recreates and experiences as an imaginary storyworld. And how does the text communicate information and cue readers' interpretations through the material appearance of the narrative (illuminations, rubrics, marginalia) and accompanying texts with which it is copied or bound (for example, pseudo-Turpin's situation within the complex compilation of the Codex Calixtinus)? By examining the constructed storyworld, we can see what effects made the text feel "real" to its original readers and counteract historians' tendency to mine such texts for details and events used to (re)construct our own notions of what a "medieval" world looked like.

Before turning to the crusade texts themselves, Bull takes us on a dizzyingly rich tour of theories regarding the nature of eyewitness perception and recall, set within the cognitive psychological, legal, and forensic treatment of memory, both individual and collective. Rightly admitting the limitations of these studies, he argues that some of their conclusions may perhaps be extended to the past, such as the human tendency to conformity and selectivity in the fashioning of individual and collective memories and socially induced forgetting and its converse, vivid "flashbulb" memories characterized by intense memories of details and set-piece scenes highlighted within a text's global meaning-making project.

Bull successfully undermines the assumptions modern readers bring to "eyewitness" texts, warning readers that cultural identity and language mold individuals' modes of memory and that the conversion of perceptions is shaped and encoded in cultural and linguistic pathways and discourses, even by the materials with which those memories are recorded (pen and parchment, a computer). Moreover, individual memories are (re)forged through communal memory- and consensus-making which takes place on multiple registers: face-to-face collectives and larger collective memory, each of which has its own narrative templates. Narrators of crusade texts formed episodic memories based on actions around them but filtered through semantic registers. These memories were recounted and revised in the collective exchanges which would have occurred during crusading campaigns. Authors embedded these rehearsed memories in collective frames of reference to form a coherent narrative indebted to or dialoguing with the content and form of other narrations (85). During the writing process, the individual focus reemerged in the construction of the autoptic narrator as textual effect, an artefact of the construction of the text in a dialogic environment (medieval authors rarely wrote in isolation). As these new narratives were read aloud and copied, they contributed to the process of collective memory formation and many joined the narrative templates and myths that formed the substrata of longue-durée collective memory, the very generic paradigms and semantic registers utilized by authors of "eyewitness" texts: pilgrimage and travel literature, epic songs, romances, deeds of rulers, narratives, hagiography, and sermons.

Lengthy "eyewitness" crusade narratives were thus an impressive achievement requiring coherent plots and consistent character motivation. They not only pioneered or extended generic forms (such as Old French versified and prose history) or hybridized genres (history crossed with chansons de geste and romances) but represented the narrativization of an extended collective enterprise which required narratorial detachment from autobiographical recall even as the narrator appealed to it to validate his claims. And yet many authors as narrators attempted to recreate the experiential quality of eyewitness perception through focalization, thick visual description, and other devices and bolstered their own memories through notes, copies of documents, and material souvenirs.

Bull ponders if it is only crusade texts which placed particular demands on the narrator to subsume the autoptic narrator to the collective "we": was this strategy an attempt to capture aspects of lived actuality, collective cohesion, and identity peculiar to crusading or did it characterize other genres (341)? He points the way to other models too, which might be profitably applied to narrative texts including paradigms of witnessing and bearing witness in biblical and hagiographical texts and medieval theories of sight and legal witnessing. If memories are forged in consensus within one's collective, are they also forged in debate with other collectives? Bull rightly included a consideration of Arabic narratives for the Third Crusade and Greek for the Fourth - surely one could continue to explore similarities and differences in narratorial strategies between regions and linguistic, religious, and cultural groups, yielding further insight into the construction of memory and narrative along or across these lines. As these queries suggest, massive in scope and conception, this richly interdisciplinary book should benefit anyone teaching or researching historiography, memory, literature, or the crusades.