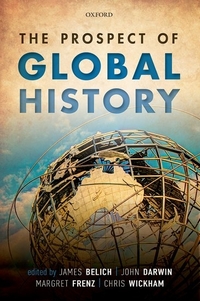 What is global history? In recent years a succession of volumes have emerged directed at this question. The Prospect of Global History is one of them. Edited by James Belich, John Darwin, Margret Frenz and Chris Wickham, it arose from a conference on 'New Directions in Global History' held in 2012, soon after the launch of the University of Oxford's Centre for Global History. It features contributions from several eminent scholars including Linda Colley (Princeton), Jürgen Osterhammel (Konstanz), Robert Moore (Newcastle), Kevin O'Rourke (Oxford), Nicholas Purcell (Oxford), Francis Robinson (Royal Holloway) and Matthew Mosca (Washington). As Osterhammel - the only contributor based in a non-Anglophone university - notes in his chapter, global history in British contexts mostly traces its origins to imperial history. This is especially so at Oxford which continues to hold a weekly "Global and Imperial History Research Seminar". Chapters by Belich and Hopkins do lay out a relationship between empire and globalization, but the volume does not grapple directly with this genealogy. Instead its chapters cover a temporal and spatial range that is rare in books for this kind; from Mediterranean antiquity to the Qing Empire and the long span of the Muslim world. For Belich, Darwin and Wickham, global history, with its focus on connections and mobilities, is a new way of doing history; a response to the uncertainties of our own times and the challenges they present to older historiographies of nation-making (20).

For John Darwin, what global history offers is a "prospect" - "a view of the landscape from any position"; one that that opens up "multiple vistas" and presents many questions (183). But a 'prospect' is not only a view, but also an act of looking forward; an anticipation or a possibility, and in this sense the title of the volume could be read as a projection of the future direction of the discipline. The authors, however, are careful to disavow any notion of inevitably increasing global connection. On the contrary, giving a history to our current globalizing moment, argues Darwin, demonstrates that connectivity is not something that is linear or inevitable. There are periods when links across geographic zones accelerate and periods when they retract; there are parts of the world more intensely entangled in these processes, and others cut off by them; and the geographies created are always subject to change. In that sense, writes Darwin in his Afterword, global history "is far from being a mere celebration of globalization in its current form" (180).

But if global history is a kind of historiographic optic, it is one that requires a set of conceptual lenses in order to achieve focus. To this end, Belich, Darwin and Wickham offer in their Introduction a series of typologies. They sketch out three categories of space: sub-global, semi-global and pan-global; four measures of intensity: contact, interaction, circulation and integration; and four "vectors of connectivity": diffusion, outreach, dispersal and expansion, together with a potential fifth - attraction. They then proceed to offer a kind of whistle stop tour of forms of long-distance connection from Neolithic Spain to the Roman Empire, Mongol khanates and Eurasia, in the process identifying not one, but four 'great divergences' and singing the praises, as well as the risks, of comparison. Looked at with a comparative eye, they write, "every society of the past, across the globe, gives us a new set of questions to pose of other societies and a new set of alternatives." The global becomes, they suggest, "an array of possibilities" not all of which were taken up (14). Turning their attention to connectedness, they pin their colours to the mast of uneven or differential connection and note that states have sought to extend as well as channel and control it. We hear about "human vectors", the "infrastructure of transmission" and "transformer" and "vertical" nodes (16, 17, 18).

These typologies offer a potentially useful, if somewhat dizzying, set of tools with which to undertake global history. But for the most part they do not feature significantly in the chapters that make up the body of the book. The Introduction states explicitly that the book's aim is not to "advocate" global history but rather to "apply" it, and the modes of this application are as diverse as are the possibilities of the past. The most compelling are perhaps those by Belich, Colley, Purcell and Mosca, and it may be no accident that these are in many ways also the most concrete of the contributions to the volume. They take up, respectively, the Black Death, written constitutions, the incense trade and a Qing nobleman's genealogy of the descendants of Chinggis Khan. While Belich's piece is a characteristically vast argument for the long-range influence of the plague on what he calls "the spread of Europe", Mosca and Purcell make a case for the importance of micro-historical approaches. Peering closely at the individual threads that constitute the fabric of history, argues Mosca, shows just how deeply individual Qing subjects were woven into global developments (123).

These are some of the prospects opened up by global history. But, when used as a verb, 'prospect' also means to go looking or exploring. There is a sense, of course, in which all those engaged in historical study are prospecting for the past. What we find often depends on what we are looking for and the tools we have at our disposal. Although Darwin writes that global history can have a social function, what seems missing from this volume is a clear sense of the contribution the field has to make to our current political moment. Our times need global approaches, not only in order to explain globalization, but because the world is facing pressing global problems. It no longer seems enough to know that human history has been shaped by past climate catastrophes, or that humans have responded to environmental crises in a variety of ways. Human action has itself brought about environmental effects with devastating and long-term consequences. What we urgently need is a better understanding of the global systems and supply chains, of the attitudes of dominion, and of the extractive politics and practices that have produced our current crisis, as well as a set of resources for living together with each other and our world. If global history was to go prospecting, that is what it might find.