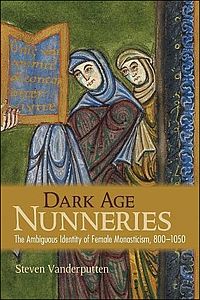 Medieval female monasticism in the centuries around the year 1000 remains a relatively unexplored land shrouded in preconceptions. This book aspires to challenge several deeply-rooted ideas about this phenomenon. Forty female monastic communities in Lotharingia in the period between 800 and 1050 are surveyed in order to better understand the female monastic landscape. This issue has been neglected in scholarship for a long time. Scholarly investigation began after the 1990s; however, it remains marginalised in publications on medieval monasticism as Vanderputten shows. In his introduction, he openly admits that he, too, had overlooked the phenomenon, omitting female monasteries from his 2013 book Monastic Reform as Process: Realities and Representations in Medieval Flanders, 900-1100.

The phenomenon has generally been observed from the perspective of normative sources written by male clerical reformers, who made efforts to keep female communities in distinct and restrictive categories. Vanderputten, therefore, relies extensively on little-known narrative sources, mainly hagiographies produced by female communities. Thus, instead of evaluating the situation from the perspective of male reformers, he works with the narratives of the communities, in order to reconstruct their self-understanding.

The volume opens with an example that vividly illustrates the main issue, which runs like a red thread throughout the whole book: the identity of female religious communities. The author analyses the tenth-century tombstone of the abbess from the Pfalzel female community in Trier, which names the buried woman as canoness (canonica) and nun (monacha) at the same time. However, according to Carolingian normative sources, this kind of 'ambiguity', as Vanderputten calls it, would not have been possible at that time. After the Carolingian monastic reforms, it was mandatory for all female communities to follow one of two legitimate forms of religious life: Benedictine rule for nuns, or a more relaxed regime for canonesses. This tombstone suggests that this strict division into two categories did not necessarily happen outside normative sources. Throughout the book, the author gives other examples of communities that existed between these two models, with a certain intellectual and spiritual autonomy. However, in the period under investigation, male clerical reformers made several attempts to regulate female monasticism, the most famous being restrictions from Archdeacon Hildebrandt, the future Pope Gregory VII.

The book is mainly interested in looking at how female communities reacted to the changes caused by these restrictions, monitoring their strategies to remain socially relevant and spiritually influential in their region. It is divided into six chapters, starting with the Carolingian reforms of 816, which reorganised female monasticism and installed two distinct religious cohorts. Previous scholarship supposed that this resulted in a bipartite system and a subsequent decline in female communities. However, the author argues that it galvanised a new kind of diversity and encouraged women to develop several strategies to remain relevant in society.

The following two chapters are dedicated to primary sources produced by these communities between the Carolingian reform and circa the 930s. According to Vanderputten, these texts disprove the prevalent hypothesis that female monasteries had fallen into social and spiritual redundancy and general catastrophic decline. The author demonstrates that female institutions had several important functions, such as cooperation with Carolingian royals on managing regional aristocratic networks, for which they obtained royal protection. Nevertheless, their subordination to laymen never became so strict as to jeopardise their independence, as argued in Chapter 3.

The fourth chapter discusses a transitional period in the central decades of the tenth century, when many communities were involved in reformative activities of ecclesiastical and lay rulers. This period was a difficult time for non-traditional forms of female religious life, which were gradually rejected by male clerical reformers. At this point, an initial decline in intellectual and spiritual autonomy can be seen. Moreover, the discourses of male clerical reformers of this period strengthened the division between the Benedictine and hybrid models of female religious institutions; such treatment was flavoured with 'anti-ambiguity' rhetoric, flourishing and still reverberating in scholarly discussions to this day.

The last two chapters survey the period between 970 and the middle of the eleventh century, when a number of female institutions were established. These communities, founded by lay or more often clerical rulers, were, however, mostly subordinated to the Benedictine rule. The study reveals that clerics often attempted to insert female religious institutions into the ecclesiastical structures of power and limited their spiritual and material freedom. Finally, Chapter 6 shows that this suppression did not force a definitive end to the ambiguous communities, but was radically part of the creation of discourse, which considered this monastic life entirely inappropriate.

The main deficiency of the book might be its limitation to the Lotharingia region, which is justified only by the fact that Lotharingia had the second highest number of female communities after Saxony. It would be thought-provoking to make a comparison with Saxony, for instance. In the period of Lotharingian community restrictions, women in Saxon monasteries, often under the protection of the king, enjoyed a period of astonishing power and freedom. Also, the reference to the 'Dark Ages' in the title is misleading, because the book clearly shows this to be a merely modern construct, which is subsequently carefully and systematically dismantled. Finally, developing the subject of the ordination of women and its position in female monasteries and society in general, undoubtedly an important part of their ambiguous identity, would have broadened the perspective.

In general, the book illuminates the little-explored landscape of female monasticism. It observes a number of communities existing in a certain environment of lay and clerical rulers, whose perspective on these communities prevailed in scholarly discussion. A significant contribution is the clear statement that we still perceive female communities of the period through this lens. Vanderputten demonstrates that the current narratives remain oversimplified, and opens up possibilities for its revision.