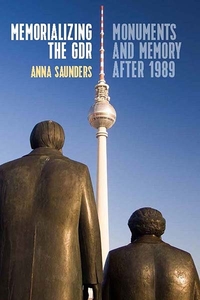 Anna Saunders' book is an engaging, wide-ranging study of how the German Democratic Republic (GDR) has been remembered in memorials since 1989. On the eve of the thirtieth anniversary of the fall of the Berlin Wall, this work offers a taking stock of efforts in the former East, including, but not confined to Berlin, to grapple with memory of the GDR. Since many works on this subject, including this reviewer's own work, [1] focus on Berlin, Saunders' book offers a particularly welcome broadening of the geographic focus to include not only Berlin but also Leipzig, Plauen, Schwerin, Dresden, and elsewhere. The author examines not just well-known memorials, but also a variety of lesser-known memorial projects.

Drawing on sources ranging from local public and private archival collections to interviews to published materials in the media and on websites of memorials, Saunders is interested in tracking the process of constructing (or modifying old GDR) memorials from early plans to implementation to reception, including ongoing debates along the way and commemorative rituals developed around memorials. She also situates the memorial projects in the broader context of earlier GDR approaches to memorials, the practices developed around Holocaust memorials in the FRG and in united Germany, and contemporary debates about the GDR.

After establishing these contexts in the introduction, Chapter I addresses the literature on collective memory, monuments and memorialization. Saunders argues persuasively that Jan Assmann's concepts of communicative and cultural memory must be seen as interrelated and interacting instead of two discrete processes operating at different time periods. [2] She identifies "memory activists" who lived through the GDR period and who since unification have influenced the nature of memorials via communicative memory as well as others who have been born since the end of the GDR and thus have only a cultural memory of it. Saunders also emphasizes the dialogic nature of memory, with memorials constructed in the present interacting over time with past and future memorials. An important arc of the story Saunders tells concerns the democratization over time of both the aesthetics of memorials (shifting from a traditional focus on statues of leaders to the more contemporary focus on victims and to more abstract designs) and the process of memorial creation (with the traditional focus on state-backed memorials being expanded to and even replaced by grassroots initiatives).

The core of the book is found in five chapters assessing different focal points of monuments and memorials since 1989. Chapter 2 examines the post-1989 fate of socialist monuments from the GDR period, including the removal of the massive Lenin monument and the preservation of the Ernst Thälmann memorial in Berlin, the preservation and renewed centrality of the Marx monument in Chemnitz, the repurposing of Halle's Flag monument, and the transfer of Leipzig's Karl Marx relief. Chapter 3 is devoted to the treatment of Soviet special camps, prison and interrogation centers, sites which sometimes were located at former concentration camps, such as Buchenwald. This chapter covers commemorative developments at sites such as Buchenwald, Fünfeichen, Greifswald and Berlin, also clearly describing the origins of these sites. As Saunders writes in this chapter, but it holds for her other chapters as well: the memorials "stand as reminders of specific periods and events in East German history," but also "have been used to highlight much broader moral questions, in which the democracy of the present against is pitted against the dictatorship(s) of the past." Accordingly, "such structures stand as much for the promotion of the global values of human rights, freedom and democracy in the present as for the remembrance of specific Soviet and GDR crimes in the past". (150)

Chapter 4 looks at memorials to the June 1953 East German Uprising, focusing on examples in Berlin, Henningsdorf, Leipzig and Dresden, both of the latter in the form of tank tracks to recall the Soviet tanks involved in the brutal response to the uprising. The 1993 Henningsdorf memorial in the town just outside of Berlin commemorates the 10,000 workers who marched 27 kilometers into the center of East Berlin to participate in the uprising and then maintained their strike the day after Soviet tanks intervened. This and other monuments to the 1953 Uprising heroize the East Germans who took to the streets in 1953 (as other monuments do for the East Germans of 1989), adding to and modifying the traditional German focus on perpetrators and victims of the Holocaust.

Chapter 5 covers a variety of examples of commemorating the Berlin Wall such as the competition to design artistic monuments to be placed at former crossing points in the Wall, crosses erected for victims of the Wall (including Alexandra Hildebrandt's "Freedom Memorial" at Checkpoint Charlie), the development of and debates surrounding the central Berlin Wall Memorial at Bernauer Strasse, and a city-wide plan for remembering the Wall passed by the Berlin Senate in 2006. Saunders' discussion of the 1999 memorial to victims of the Wall in the Berlin district of Treptow, including two boys aged 10 and 13 who were killed while trying to escape in 1966, is particularly moving and does a great job of explaining the various people and processes involved in creating this memorial.

The final subjects investigated by Saunders are memorials to the Peaceful Revolution and German unification in Chapter 6. After examining the debates surrounding a national Freedom and Unity Monument supported by the Bundestag in 2007 but still unbuilt, Saunders describes the process leading to the erection of the pillar in the courtyard of Leipzig's famous Nikolai Church in 1999, unresolved disputes preventing the development of a Freedom and Unity Monument in Leipzig, the unveiling of Schwerin's Round Table Monument in 1990, Dessau's Peace Bell Monument in 2002, Magdeburg's Citizens' Monument in 2003, and the Wende Monument in Plauen in 2010, the last marking the important role of Plauen with the first mass peaceful demonstration on October 7 1989. In each case, as throughout the book, Saunders clearly describes who was involved and how and why the monument was completed or not, including debates about history, aesthetics and current politics along the way. She concludes that monuments developed by grassroots campaigns have found more success than those supported by governmental edict and that "the majority of monuments were driven by a specific social group: former demonstrators, usually male and in their forties in 1989, whose desire to find a more durable, cultural form of memory for the events of 1989 arose precisely out of the need to communicate this memory while it was still living." (296)

I highly recommend this thoughtful, well-written book for all who are interested in understanding the place of the GDR in contemporary debates about the past and the present and for gaining insight into a certain sense of German national identity by examining lessons Germans draw from this past.