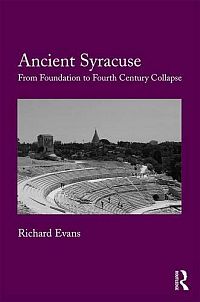 At the end of the Archaic period, Greek Syracuse underwent its important historical transition from city-state to imperial territorial state. From that point on, Syracuse became one of the leading politically dominant forces within Sicily and beyond, a trajectory that lasted, with periods of expansion and contraction, until the Roman conquest of the city in the late third century BC. Richard Evans' book is the latest addition to an extensive bibliography on Greek Syracuse. The book's core is made up of eight chapters, bookended by a preface (xv-xviii) and an even briefer epilogue (189). In the preface, the author sets out to examine the history of Syracuse as an important centre in the Mediterranean through a "broad range of sources" (xvi). The eight chapters outline the historical narrative of the city from foundation through to the fourth century.

In Chapter 1 (1-18), "The Myths and the Reality of the Foundation," the author highlights the many varying historical sources on the foundation, and clearly demonstrates the difficulties of interpreting the historicity of these sources. Chapter 2 (19-56) is devoted to "The Deinomenid Tyranny (ca. 700-466)" and takes a long view of the subject in theory, but in practice fleeting mention is made of the city in the seventh and sixth centuries, especially its monumental temples. The rest of the chapter focuses on Hippocrates, Gelon, Hieron, and the events and peoples associated with them.

The six other chapters deal with considerable briefer periods of time and subject, though in a more detailed manner. Five of these chapters deal with the fifth century alone. Chapter 3 (57-78) focuses on "The Fifth Century Collapse (466-460 BC)" and tackles the short reign of Thrasybulus and its immediate aftermath, along with the unrest in the cities in eastern Sicily, not just Syracuse, which were previously controlled by the tyrants. This sets the stage for Chapter 4 (79-92) on "Democracy and Ducetius (460-427 BC)," in which Evans highlights the character of Ducetius, only known to us through the writings of Diodorus Siculus, alongside the period of democracy in Syracuse. The Athenian interest and invasion of Sicily are discussed in two chapters. Chapter 5 "The First Athenian Expedition (427-424 BC)" is essentially a comparison between the surviving accounts of Thucydides and Diodorus Siculus, in which the former largely comes out on top (93-106). Chapter 6 "The Second Athenian Expedition (415-413)" is a lengthier chapter on the disastrous attempt to capture Syracuse and its possessions in Sicily (107-145). Chapter 7's title "The Rise of the Tyrant Dionysius I" implies that Evans moves straight down to the events of 405/404 BC, while in fact it picks up directly after the failed Athenian invasion.

The final Chapter 8 "The Fourth Century Collapse" examines the decline of Syracuse's tyranny in the reign of Dionysius II and the civic factionalism that ensued (163-188). Although Timoleon is mentioned here and there in the text and footnotes, this chapter decidedly cuts off the discussion with the period of chaos immediately before the "revival" of Syracuse and Sicily.

The "Epilogue" is a paragraph long (189) and summarizes the misdeeds of the tyrants and would-be tyrants of Syracuse and the deeds of Timoleon and the Romans in restoring its grandeur and prosperity, in which the last word is given to Cicero (in Verr. 2.4.117) on Syracuse being the greatest and most beautiful city of the Greeks. Unfortunately, no mention is made here of Agathocles or Hieron II in this race to the end. The book is rounded out with "A Chronology of Syracuse" (191-196) and six appendices devoted chiefly to particular problems and features of the ancient literary sources (197-221), a bibliography (223-229), and an index (231-241).

What should a scholar interested in Syracuse, Sicily, and pre-Hellenistic history in general make of this book? The last twenty years have seen a surge in interest in the study of ancient Sicily and Syracuse, and it is in this context that this book must be placed. It is clear that, in some cases, the new publications latch on to a wave of popularity and seek to fill a niche in readership. That helps to reinforce problematic tendencies that others are seeking to avoid, with the result that not all the research outcomes are of equal merit and impact. We believe that to be the case here. Although the preface promises a "broad range of sources," the book offers analysis of only the literary record. While these sources are handled well, and the prose is flowing, the end result is inherently limited and frustrating, in that it does not utilize archaeology in any serious way. At the end of Chapter 4, for example, Evans considers the site of Palike only in the context Diodorus' narrative. Because of this, the fact that Palike was an important Sikel religious site, with permanent structures as early as the Archaic period, is lost. Many other similar examples could be raised. The reader needs to be aware that Evans often alludes to archaeology, as when he describes, rightly, the Classical Doric temple at Segesta as "unfinished" (111), but this and the other monuments used to illustrate his text are little more than ornamentation. The historian's serious engagement with archaeology is what is missing here. However, it is not just a problem that Evans uses only literary sources, but that he claims to be writing a history of Syracuse from them. Had he restricted himself to a discussion of the historical sources on Syracuse, and cast this discussion in as broad a way as possible, including the limitations of these sources as revealed by research (most notably, the advances in Thucydidean scholarship are entirely missing), the end result could have been more interesting and much less problematic.

There is also the related and equally serious problem of the bibliography. It consists of mainly secondary bibliography in English: of the 142 items listed, only two are written in Italian, only one is written in German, and none written in French or Spanish is included. Even if we generously add a handful of Italian scholars who have written in English to make their research accessible, we are nonetheless talking about no more than four percent of the cited scholarship coming from the main linguistic traditions involved in research on Syracuse. Clearly, the audience is intended for English-only readers, but why that should entail overwhelmingly English-only bibliography, which is not necessarily the most significant for research on the subject, to produce the narrative is a faulty decision that could have been avoided. What is more, even the English-language bibliography does not access the research that one would expect on particular topics tackled by Evans. Glaring omissions include Carol Dougherty, The Poetics of Colonization (1993), any work from Irad Malkin, and Lionel Sanders, The Legend of Dion (2008). What about all the relevant research on pre- and protohistory from the region conducted mainly by Italian scholars? These are not minor gaps of overzealous reviewers looking for needles in the haystack; instead they are very serious ones which affect the quality of the narrative Evans offers here.

In closing, we wish to underline very strongly how our comments must not to be taken as unduly disparaging and person-specific. It is the historical approach that is troubling here. We hope our comments highlight the need to make multilingual, interdisciplinary scholarship the norm.