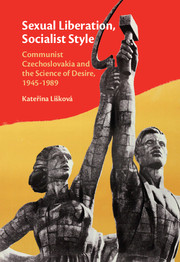 The history of sexuality has become a popular area of research on both the western and the eastern sides of the former Iron Curtain. [1] After several aspects of Czechoslovak sexual history have already been addressed by other scholars [2], sociologist Kateřina Lišková turns her attention to expert discourses and their interrelations with the communist regime.

Lišková seeks to convince readers that neither the stereotype of communist puritanism nor a linear narrative of sexual liberation applies to communist-era Czechoslovakia: the "long 1950s" - lasting from 1948 to the early 1960s - marked an age of sexual liberation mostly initiated 'from above' (unlike later in the West, where liberation emerged mostly 'from below'). In the 1960s, restorative tendencies emerged - according to Lišková one of her original findings [3] - with the Soviet-led invasion in 1968 which initiated a full-fledged backlash.

After a general overview of how gender and sexual relations in East Central Europe evolved under state socialism (chapter 1), Lišková devotes special attention to the "long 1950s" (chapter 2). During this time, sexology - that is the medical study of human sexuality - was essentially influenced by the regime's emancipatory discourse (and vice versa). Sexologists pointed out that a successful marriage was based on equality, love, and sexual satisfaction. Also, they contributed to the legalization of abortion in 1957. However, new provisions restricting abortion access were re-introduced from 1962 onward, which Lišková interprets as sign that "the time of revisions" (121) had arrived.

What Lišková describes as the "transforming nature of the regime from its egalitarian and utopian beginnings to the hierarchical late stages of Normalization" (156) is also illustrated by research on the female orgasm (chapter 3). In the 1950s, a "new type of family" (137) was supposed to facilitate climaxes. A decade later, discussions on sexual techniques such as clitoral stimulation had gained relevance (e.g. in call-in radio programs). By the 1970s, sexual therapies in psychiatric hospitals and marriage counseling had become the preferred 'cure'. Thus, sexuality was transferred from the public to the private sphere. Much like the rest of people's lives, sexual matters were supposed to be discussed behind "closed doors" (155).

A de-liberalizing tendency also characterized family politics (chapter 4): When decreasing birth rates became a political issue in the 1960s, both the state and the sexologists shifted their focus from emancipation to motherhood. Notably, institutionalized child care was increasingly rejected. Moreover, sexologists forfeited utopian positions: after having promoted a society in which equality, love, and sexuality had been closely linked, they now instructed people "not to expect much; only then could they reach some satisfaction" (226). As the sexologists' activities became more relevant for the regime, their work conditions improved and their professional ties to the state became closer. However, a two-way relationship still existed: "(...) sexology needed the state and the state needed sexology" (16).

Such a two-way relationship also came to define policies toward male deviance (chapter 5). In the 1950s, sexual deviance hardly played a role on a jurisdictional level. For example, cases of zoophilia were not generally criminalized and only went to court when "they hindered worked or harmed the national economy" (e.g. a man who abused a cow was sentenced for "'damaging socialist property'") (226 ff.). In the 1970s, hundreds of men, many sexual aggressors, were sentenced and assigned to sexological wards. The quest for "normalcy", typical for the so-called Normalization period, led to a fight against "'subversive elements'" (7) in a sexual sense as well.

One of Lišková's most significant insights is that sexologists' discourse promoted a restorative shift between the 1950s and 1970s. Able to leave its mark in certain policies, sexology was in her analysis no "monkey business merely aping the commands of the ruling elite" (256). Moreover, a similarity between the East and West is pointed out: across the Cold War divide, an individualizing therapeutic discourse became a means of controlling lives (notwithstanding important differences). In the West, the discourse was intertwined with neoliberalism, while in the East it "facilitated the atomized stage of late socialism." (260)

An adequate evaluation of Lišková's book is not possible without mentioning a "Notice of Unethical Scholarly Conduct" [4] which six Czech scholars, all active in gender studies, have recently published. It states that this book "meets the accepted definitions of plagiarism" and that it "present[s] new research (...), but it is far less than the author claims, and at the cost of other people's work." Aside from this rather pointed criticism, the study has drawn highly positive reactions, mostly by English-speaking reviewers.

The abovementioned notice nonetheless points out a weakness of the book that would have likely remained unnoticed by a non-Czech speaking audience. Particularly in the first chapter, which is mainly derived from secondary literature, it would have been appropriate to cite existing research more thoroughly. Several mentions that the "book explores previously unexamined histories of sexuality and gender in one country of the Eastern bloc" (22) seem exaggerated - but, in fairness, such claims are perhaps symptomatic of today's overly competitive academic world.

Generally, Lišková's study (especially chapters 2 to 5) is well-documented and based on an impressive body of sources. Even though a more condensed analysis would sometimes have enhanced the book's clarity, the author's scholarly apparatus underpins what is a highly convincing and vivid study. Lišková offers a great deal of new information - particularly, the chapters on the female orgasm and on male deviance warrant close attention - as well as thoughtful interpretations of gender and sexual relations that extend beyond Czechoslovak history. Her findings on how sexology positioned itself in the socialist system are insightful in a broader context, especially from perspectives informed by the history of science.

[3] In fact, a similar stance on the 1960s can be found in an article by Barbara Havelková from 2014, in which she mentions that this decade brought about "challenges from experts to the concept and policy of equality of the sexes" (Barbara Havelková: The Three Stages of Gender in Law, in: Havelková/Oates-Indruchová: The Politics of Gender Culture, 31-56, 32).