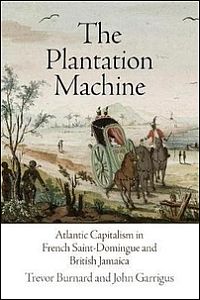 In The Plantation Machine Garrigus and Burnard draw on their unparalleled expertise to provide this comprehensive history of Jamaica and Saint Domingue as plantation regimes at the height of their success in the eighteenth century. Readers will appreciate the opportunity to learn in detail about these two important "sugar islands", whose history, as Garrigus and Burnard demonstrate, is entirely possible to recount as part of single trajectory. The book therefore reveals the commonalities between eighteenth century sugar economies, emphasizing the contingent impact of different imperial regimes on their development. As a text in which the authors fully blend their knowledge to produce a sweeping, comparative, story of the Caribbean sugar economy, this monograph should prove indispensable for readers looking to find out more about the development of the region as a motor of wealth and slavery in the Atlantic world.

It is the authors' proficiency in their respective fields that alerts them, in the course of their analysis, to the subtle differences between the two islands. These contrasts are investigated as part of a rich, chronologically organized, narrative. As they note in their introduction, writing a "comparative study without a deep immersion in the archives" (11) can easily result in generalizations that over-emphasize similarity. While the chapters take us through a clear set of shared topics - urban life, the experience of the Seven Years War, slave rebellions, shifting regimes of racial differentiation, revolution, "golden ages" of plantocracy, and consolidation in the 1780s - Burnard and Garrigus are careful always to attend to the variety of experiences that unfolded under these themes. Nevertheless, they also work to emphasize the unifying characteristics of Jamaica and Saint Domingue as places of violence and exploitation, but also of dynamism and economic vitality.

What results is a uniquely informative story of the development of sugar plantation society across the second half of the eighteenth century. Beginning in each island's chief towns - Port-au-Prince and Cap Français in Saint Domingue and Kingston in Jamaica - the authors sketch out the importance of urban sociability among whites, and urban economy among free black and coloured peoples. The tension between these differing populations that was so visible in the confines of the city also stands at the heart of the book, as European planters' accumulation of wealth worked hand-in-hand with an increase in the brutality of the slave labour regime. This process was, however, shadowed by two looming forces; rebellions by enslaved majorities and evolving metropolitan European attitudes towards the goals of imperial administration and the morality of slavery. On the whole it was these forces, originating respectively within the plantation societies and external to them, as opposed to the more familiar pressures of war, that threatened the success of the sugar economy. Neither the Seven Years War, nor the American Revolutionary War, presented anything more than a vague threat to the islands. While the Seven Years War encouraged the growth of Jamaica's plantations with an influx of African labourers, it was a very large uprising of enslaved people in 1760's Tacky's Rebellion that mounted the greater threat to planters' quest for wealth and ever-increasing sugar outputs. In Saint Domingue, the war was indirectly perilous, as blockades produced a flour shortage, which the authors plausibly suggest was the cause of widespread consumption of spoiled flour. The mortal effects on whites of this flour were mistaken by them for a conspiracy by their slaves to poison them. The so-called "Macadel" plot led to numerous enslaved Africans being found guilty of murder and hung. Crackdowns on black freedoms on both islands, along with stronger efforts to exclude free coloured people from white privileges, thus characterized the 1760s and early 1770s.

On Saint Domingue, the growth of planter wealth and power was threatened, but not checked, by the efforts of the French metropolitan authorities to overhaul imperial administration. During the American Revolution possible invasion was a constant menace, but in the end military campaigns succeeded in St Eustatia and at Yorktown but failed in Jamaica and Saint Domingue. Into the 1780s, both sugar economies thus remained undimmed as places as brutal as they were profitable for their white masters.

The authors' ability to conjure this coherent and enlightening narrative out of the complex events of this era is, without doubt, impressive. This book will be indispensable for students and scholars looking for a sweeping, yet richly documented, account of the rise of the Caribbean plantation society as a form of capitalist European wealth generation in the eighteenth century. That the study achieves this narrative, while also working across empires and balancing the competing external and internal influences at work in these dynamic but troubling societies, makes it a truly original contribution to the scholarship both on the Atlantic world and its Caribbean region. Although enslaved people as a majority of the islands' residents have a key role to play in Burnard and Garrigus' story, one might wish that they could emerge more often in three dimensions. Even as rebels, Africans appear as the provocateurs of white anguish or wealth, their contributions rarely achieving profound influence over island culture. One cannot expect the authors to cover every facet of their topic, especially when they are already discussing two empires. Nevertheless, to my mind there was room for some more discussion of these societies "from the bottom up". Such a focus I believe would have added more dimensions to the internal forces, outside of slave rebellion and European capitalism, driving the elaboration of these island societies and economies. Still, the authors are to be congratulated for writing a singular book that achieves a thoroughness of comparison and trans-imperial narrative rarely attained in Atlantic world scholarship.