ARCHIV
Sie sind hier: Start - Ausgabe 19 (2019), Nr. 11 - Rezension von: The Excerpta Constantiniana and the Byzantine Appropriation of the Past

András Németh: The Excerpta Constantiniana and the Byzantine Appropriation of the Past 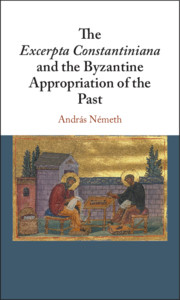 Imagine that you were appointed to a team of scholars charged with taking the works of at least twenty-six ancient Greek and early Byzantine historians and cutting their narratives into passages, each of which had to be slotted into one of fifty-three thematic categories (such as accessions, marriages, victories, defeats, customs, peoples, and virtues and vices), for the purpose of producing a set of deluxe anthology volumes, with the excerpts relating to those themes distributed among them. Also, you had to do this in the palace of Constantinople using the technology and resources that were available there in the mid-tenth century AD. If this was your commission, you could do worse than the Excerpta Constantiniana, which was produced by the team of scholars hired by the emperor Konstantinos VII Porphyrogennetos (d. 959) in the 940s and who were subsequently supported by the eunuch chamberlain Basileios possibly as late as the 980s. The immense product of their labor probably ever existed only in a single set kept in the palace library.

Now, imagine that you had to reconstruct how that team carried out its labor, but you had only two of those fifty-three volumes and later copies of three others (only one of which was complete), as well as some, but not all, of the ancient historians whom they anthologized. You would likely not produce a better reconstruction than András Németh has in this book.

Németh's principal contribution to our understanding of the mechanics of this labor is to postulate an intermediate stage of draft copies, "loose fascicules," between the annotation and notional carving up of the original historians (on the one hand) and the production of the deluxe copies (on the other). He supports this deduction throughout the book with arguments from different directions, and it is reasonably convincing. His reconstruction of the team's working methods overall is detailed and meticulous. The point on which I am not fully convinced is that the entirety of each ancient author was anthologized, with each passage going into the relevant volume. This remains possible, if not necessarily proven, for all that it is taken as axiomatic throughout the book (yet Németh himself notes some possible gaps at 105).

Németh's principal interpretive conclusion is to explore the impact of this modality of anthologizing on a wide variety of textual productions from this period. The Excerpta were part of a broader culture of using the cut-and-paste technique to produce thematic anthologies, and Németh explores the links between them and a range of other manuscripts, including the many other collections sponsored by Konstantinos VII, such as the Book of Ceremonies, the De administrando imperio, and others. The editors of the Souda also relied on the Excerpta, to a degree, as did the historians who worked for the emperor. Németh has fleshed out the large impact that this modality of scholarship had on the productions of this era (as one might, by way of comparison, assess the impact that the Thesaurus Linguae Graecae has had on scholarship after the late twentieth century). Every student of the Byzantine tenth century needs to understand the principles of composition that lay behind these works, as Németh lays them out.

Németh also attempts to reconstruct the ideology behind this project, such as the view of history that they collectively embodied, but here I was left with a vaguer set of impressions. Were the Excerpta really a "research engine" (87, and ch. 3) that could reveal "hidden connections" and "hidden principles" (212-213, 231) by bringing excerpts from different historians together in an almost random way? What principles? What the Excerpta certainly did was annihilate the integrity of each historian and make it impossible to understand the meaning of each passage, as the latter had been taken out of context (64-66, 77). Perhaps it was no accident that this project fell into oblivion soon after it was produced. Most Byzantine scholars knew better ways of reading the ancient historians.

Especially fascinating are the overlapping explanations that Németh gives for the number fifty-three (71-77), including numerological, mathematical, calendrical, Christian, and historical (specifically the fifty-three years in which the Romans conquered the world according to Polybios, an important author in this period, included in the Excerpta). It cannot be a coincidence that the De administrando imperio also has fifty-three chapters.

A weaker aspect of the book is its concept of "appropriation," which occurs in the title too. The reader expects an argument about how one culture took over the materials of another and made them its own, as Christians appropriated the Bible, the Arabs appropriated ancient Greek learning, or the like. While one might make an argument along these lines for the Excerpta, it is not really what Németh does. He takes the term from the preface of the collection, where the emperor promises to subject the ancient writers not to synopsis (summary) but oikeiosis. The latter can be translated as appropriation, but in context that is misleading. The term really refers to the technical philological process by which the narratives of the historians were carved up and redistributed among the fifty-three collections, i.e., oikeiosis was less cultural appropriation and more thematic re-assignation on a philological level (cf. 55-56, 67-68). It was a "special form of anthologization" (59), a "scissor-and-paste method of cutting texts apart and sewing them back together again" (64) that was limited to a circle of scholars in the palace in the mid tenth century and rarely practiced thereafter on such texts. We are firmly in the world of philology and paleography, not cultural studies broadly understood. On the cultural level, the ancient historians belonged to the Byzantines already; they did not need to appropriate them.

Classical scholars who rely not only on the Excerpta themselves (for the fragments of ancient historians and their transmission) but also on the Souda and the Palatine Anthology must read this book because those projects were produced in parallel to them and in occasional collaboration with its team. Németh also explores how the Excerpta were linked to a turn within the court toward a more secular and Roman view of the imperial past, as well as a shift within Byzantine historiography away from chronography and toward imperial biography, imagined along classical lines. It is a meticulous and thorough study.