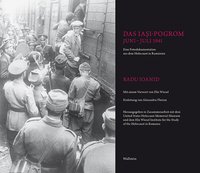 A pogrom might seem like a surprising subject for a large-format picture book. However, anyone who picks up this volume on the Iaşi pogrom of June-July 1941 will soon be convinced of its meaningfulness. As the editors point out, though the photographic record of the events of the Holocaust in Romania is uneven, the pogrom, which took place in the summer of 1941 in Iaşi, a medium-sized town in the northeast of Romania, is a notable exception. Launched as the town ended up close to the frontline in the context of the German-Romanian attack on the Soviet Union, both some of the members of the German military and Romanian secret security agents who were present documented the events visually. These images thus give a unique insight into the tragic circumstances and actions, which led to the death of an estimated 13,000 people and the injuring and lifelong scarring of thousands of others. And although there are several recent and extensive accounts of these events, none of them succeed in conveying the scale of the horror in quite such an immediate and moving manner. [1]

In his short introduction, Alexandru Florian explains that the initial idea for the volume arose from an exhibition and memorial event organized in Iaşi by the National Institute for the Study of the Holocaust in Romania on the seventieth anniversary of the events in 2011. Yet the present publication, authored by Radu Ioanid, the Director of the International Archival programs Division at the United States Holocaust Memorial Museum (USHMM), is the result of a collaboration between different scholars and institutions and more than a mere catalogue of the original exhibition. The 130 photographs presented in the book include pictures from USHMM, which holds the largest number of images of the pogrom, as well as from a range of other - Romanian, German, Dutch, and US American - archives. While some of these images are quite well known (several for instance appeared already in Matatias Carp's Black Book, first published between 1946-1948), they are reproduced here in a larger format and higher quality and definition and usefully supplemented with new information. [2] Furthermore, they are paired with excerpts from a wide range of postwar testimonies or contemporary historical sources (including Carp's seminal work), chosen to fit each photograph and help the reader make sense of what they are seeing from an individual - and mostly victim-centered - perspective.

Organized chronologically and thematically in four sections, the images' succession mirrors Ioanid's historical introduction. [3] Before the war, Iaşi had an established, diverse and highly visible Jewish community of over 35,000, representing around a third of the city's population; yet the town was also a notorious nucleus of fascist activism. A few pictures serve to set this scene. Most of the images, however, are of the anti-Jewish violence that broke out at the end of June 1941 and its immediate consequences. Some 25 prints in the first section capture aspects of the massacre of thousands of Jews committed on the streets of the city on 29-30 June. They show arrests, beatings, and abuse as well as wounded people and dead bodies lying on the ground. Several dozen more pictures in the second section depict different stages of the journey of the two so-called death trains, in which around 7000 Jewish men and some women and children were locked in the following days and weeks causing the death by hunger, thirst, and suffocation of thousands more. These images show people being herded onto cattle wagons and heaps of corpses loaded off them at a later stage and the naked, confused, exhausted, and emaciated survivors of this ordeal. The book then ends with a small selection of photographs of the perpetrators at the postwar war crimes trials and portraits of the victims dating from before the war.

The images provide unique evidence of those involved in the violence - military and police officers, and civilians - as well as of the range of acts of violence perpetrated and experienced and their dramatic consequences. Yet what makes an especially strong impression on the reader are the accompanying captions. These short texts provide ghastly and graphic but also essential and personal details. They describe feelings, smells, sights, and specific scenes: acts of cruelty, indifference and humiliation as well as acts of solidarity, compassion, and despair. They reveal that some were shot for seeking water; that others were murdered trying to help others; that survivors helplessly witnessed the death of neighbours, friends and relatives and what it meant that only a small minority of those targeted survived.

The result is a raw and poignant account, which functions somewhat like a film, eliciting a strong emotional response in the reader. Some of the most striking pictures include those of corpses strewn across the streets of Iaşi as people walk past (35-44); those showing the men involved in the gruesome task of offloading corpses from the cattle cars, including the frontal image of one of the key perpetrators parading proudly in his military uniform amid the carnage (93); or, still, the photo of people looking out of the windows of a passenger train as they ride past a heap of corpses stacked alongside the railway tracks (119).

From a scholarly perspective, the fact that quotes and excerpts from historical accounts and sources are not a substitute for a historical explanation, but that they could easily be mistaken for one, might be regarded somewhat problematic. It might have been useful to emphasize that the link between the statements and the images was established retrospectively and tentatively - sometimes more or less closely. In general, an analytical approach to the photos as visual documents or an engagement with the questions and methods of visual history research is missing. Who were the photographers? What was the purpose of the photographs? What do we know about the context of a specific shot? Beyond this, the book does raise the issue (as do many other similar projects) of the ethical implications of displaying such documents or of relying heavily on emotion and evocation to convey historical knowledge, and it might have been worth reflecting on this briefly in one of the introductions.

Notwithstanding these points, this book constitutes both a very valuable resource and a positive impulse to pay more and closer attention to photographs and study them. Research on the Holocaust in Romania is advancing with great strides, and this publication bears testament to the kind of evidence and expertise available, as well as what can still be done to raise more awareness of what happened. The German-language translation of this book, which follows its Romanian and English renditions, is therefore very much to be welcomed.

[3] This text is largely based on the relevant chapter of Radu Ioanid: The Holocaust in Romania. The Destruction of Jews and Gypsies under the Antonescu Regime, 1940-1944, Chicago 2000.