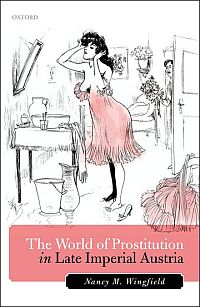 Arthur Schnitzler's famous play Reigen (Round Dance) consists of ten interlocking scenes, each involving a chance sexual encounter between a man and a woman in 1890s Vienna. The opening scene comprises a prostitute and a male customer and ends with the same prostitute propositioning a count. The prostitute thus provides the dramatic and thematic nexus linking the scenes and brings the drama to a circular close. The message is clear: this is a medieval danse macabre transposed to end-of-the-century Austria in which sex and death, Eros and Thanatos, become collusively intertwined dancers.

Nancy M. Wingfield's impressive new study of prostitution in late imperial Cisleithanian Austria demonstrates that Schnitzler's drama was not a fiction but a truthful reflection of the complexity of male-female sexual relations in the Habsburg Monarchy - which was why the play could not be staged until 1920 and, even then, was greeted with shock and moral outrage. Wingfield's carefully argued and deeply researched book shows that female sex workers in the Monarchy were not simply victims of an oppressive patriarchal system but enjoyed a degree of autonomy and agency as they navigated dexterously between the poles of Catholic conservatism (embodied by the Emperor himself) and the forces of liberalism that made the late Monarchy so workable and flexible. Reflecting that tension between religious conservatism and liberal pragmatism, prostitutes were neither banned nor encouraged but tolerated as a "necessary evil". In the words of the liberal German mayor of Brno in Moravia, "so long as instinct acts more strongly than the demands of propriety, morals and legal precepts, prostitution must be treated as a necessary evil and strictly regulated instead of repressed" (82).

The "repressive hypothesis", inaugurated by Sigmund Freud around this time, was gaining increasing currency among the liberal political elites in the Monarchy - to such an extent in fact that prostitution was regarded as a valuable safety-valve for the sexual urges of the male population, ten percent of which was infected by syphilis. The welfare of the women themselves was a lesser concern and was always subordinated to the needs of their male clients. Such was the porous nature of this trans-national polity that sex trafficking became a burgeoning industry from Bohemia in the north to the Dalmatian coast in the south, from Trieste in the west to Czernowitz in the east. Some, but not all, of these sex traffickers were Jewish, a statistic that was inflated and inflamed in the anti-Semitic press, in order to demonize Jews as depraved predators of innocent girls. The infamous Riehl trial of 1906, which exposed abuses in Vienna's brothels and the exploitation of the female sex workers to unscrupulous madams and pimps, helped to pour gasoline on this anti-Semitic fire since two of the main actors in the scandal were of Jewish descent.

The trial was widely covered in the press and led to sweeping changes and reforms in the Empire, which Wingfield documents in a series of chapters, the first of which is a blow-by-blow account of the Riehl trial itself. Subsequent chapters deal with two categories of prostitutes, those who were confined to brothels and therefore more successfully subjected to police regulation and surveillance and so-called "clandestine" prostitutes whose movements were more difficult to keep track of. Wingfield's capacious study is not just limited to the imperial capital but broadens its focus to the regional cities of Prague, Trieste, and Czernowitz as well as the rural provinces, including the garrison town of Theresienstadt. The author's impressive command of the requisite languages (German, Czech, Polish) has allowed her to mine the archives with particular effectiveness in order to present a complex and nuanced picture of regional differences as well as overall consistency in imperial policy. These regulations were so effective that they survived in many of the newly independent states of East Central Europe long after the collapse of the Austro-Hungarian Empire in 1918.

The penultimate chapter of the book chronicles the panic created by the sex-trafficking phenomenon, and as such resonates powerfully with the present-day situation in the European Union where open borders and free movement has created a similarly fraught set of problems and has brought the issue of sexual exploitation of young women once more to the fore.

For all the reasons given above, Wingfield's study of prostitution in late imperial Austria is a welcome and valuable addition to the growing number of books on the subject within other parts of Europe. It will prove to be of great value and insight to scholars and students of what has often been claimed to be the oldest profession in history.