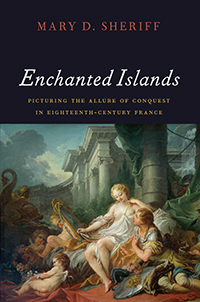 What are enchanted islands, how were they pictured and what did they represent in the literary, political, and visual culture of Enlightenment France? These are some of the questions Mary Sheriff addresses in this richly researched, richly illustrated, and beautifully produced book that is gravid with ideas. Through a series of six inter-connected chapters, Sheriff takes us on an enchanting voyage to visit these paradisiacal islands (both imaginary and "real"), where sorceresses lure hapless men with the spurious promise of sexual freedom, fantasy, and fulfilment detached from the strictures of eighteenth-century French society. Venus, Calypso, Armida, and Alcina are among the numerous island enchantresses that appear throughout this book via depictions inspired by classical mythology, Fenélon's 1699 Aventures de Télémaque, Ariosto's 1516 Orlando Furioso and Tasso's story of Rinaldo and Armida from Gerusalemme liberata of 1581. Through a study of literary, visual, and cultural sources, including travel literature, book illustrations, paintings, and prints as well as festivals, royal ballets, operas, and epic poetry, Sheriff accounts for the compelling attraction and popular appeal of the enchanted island during the Ancien Régime. The subject inspired artists, writers, and composers to feature them in their works, Louis XIV to capitalize upon political uses of the theme, moralists to view it as a metaphor for corruption at court and in society, and travellers to exotic islands (such as Bougainville), to write about their voyages to actual "enchanted" islands and describe what they encountered there. Sheriff skillfully leads us on this complex, multilayered journey through canny visual analyses, historical, cultural, and theoretical discussions regarding the idea of the island, otherness, magic and the rational as well as a critical assessment of meanings that engage ideas of racial, cultural, and sexual difference. She assesses the role of the enchanted island in the context of the problematics of colonization and national pride. Is the enchanted island utopic or dystopic? Is it a metaphor for good governance or bad? Are sexual and cultural mores relative or absolute?

Sheriff begins the book with a consideration of "Thinking with Islands". Using Deleuze as a theoretical model, she explores the phenomenon of islomanie in eighteenth-century France, a fascination with real and imaginary islands that permeated French culture. Two opposing ideas took hold. One conjured up islands as idyllic, dreamlike, enchanted places whose appeal lay in their distancing from the norms of Western culture and society as well as the allure of an enticing topical climate and the exotic beauty of the landscape. The other denigrated them as degenerative, dystopic, and fearsome places with the power to undermine and enfeeble Western values and behavior.

"Domains of Enchantment" investigates prevailing superstitions regarding black magic, love potions, and amorous spells that constituted the dark side of Enlightenment France and how such ideas came to inform the imagery of the island sorceress. Sheriff situates the sorceress in the context of the love of magic, magicians, and the occult in general (one thinks of the popularity of Mesmer and Cagliostro), as well as the fear of witches and witchcraft that constituted such an important counterpart to the moralizing of the Enlightenment philosophers. Fascinating depictions of Madame de Montespan as enchantress play a leading role in this chapter as do Sheriff's investigations of art itself as a domain of enchantment.

The evolving role of the island enchantress in royal entertainments such as ballets and festivals, from the sixteenth through the eighteenth centuries, constitute the matter of the third chapter, "Royal Power, National Sentiment, and the Sorceress Undone". As Sheriff explains: "A favorite theme was that of deliverance from an enchantress who used her magical powers to upset the order of things political, sexual, and natural. The king's job was to free himself, his knights and by extension, his realm from the disruptive power of the sorceress, and by restoring order he would effect a return to the mythical Age of Gold" (72). A prime example of this is manifest in Sylvestre's series of prints, Les plaisirs de l'isle enchantée en 1664, which commemorate the lavish three-day festival at Versailles organized by Louis XIV. Sheriff analyzes in detail these prints in which the enchantress Alina, from Ariosto's popular Orlando Furioso, plays an important role in an unfolding narrative. The prints represent in panoramic fashion the floating island of Alina, recreated at Versailles for the occasion. Sheriff persuasively argues that the choice of subject in this lavish festival which concluded with spectacular fireworks, served as a means for the King to emphasize his role in reconciling reason and magic in his kingdom.

Sheriff next examines representations of Calypso during the Regency of Philippe d'Orléans (which witnessed the emergence of the Rococo style). Calypso's enchanted island was popularized thanks to Fénelon's 1699 Les Aventures de Télemaque, which went through many editions in eighteenth-century France and would inspire artists for over a hundred years. Sheriff presents a detailed analysis and discussion of several major paintings of the theme in the 1720s in a diversity of contexts, including works by Raoux and Vleughels, which influenced subsequent renderings. Vleughels 1724 interpretation was so popular it was reproduced in prints and even on fans of the period.

The transformations of the enchantress Armida, bewitcher of Rinaldo in Tasso's Gerusalemme liberata, constitute the matter of the penultimate chapter. Sheriff investigates the immense popularity of the lovers in seventeenth and eighteenth-century art and culture, including representations in paintings, sculpture, prints, tapestries, and even on fans and wallpaper. She demonstrates that the narrative itself needs to be understood within a political context which helps to explain the importance of the subject to the King and court who commissioned works from prominent artists such as Boucher, La Fosse, Coypel, de Troy, and de Boullogne who are among the many artists Sheriff discusses.

The concluding chapter addresses travel accounts that describe voyages to actual islands that were understood through the lens of the mythology of the enchanted islands in eighteenth-century France, such as Tahiti and Saint Domingue. Bougainville's 1771 Voyage autour du monde, and especially his accounts of his voyage to Tahiti (dubbed La Nouvelle Cythère), nurtured the mythos of the enchanted island while at the same time countering notions of an idyllic society, an island paradise, with the realities encountered there which were far from enchanted. Although Saint-Domingue, a French colony since 1659, was known for its dystopic elements it was still mythologized as an enchanted place in the French imaginary despite historical circumstances that should have undermined the myth.

In this engaging book Sheriff brings together a wealth of visual, literary, historical, and cultural elements that she weaves into a rich fabric, bringing to light much that is new. Enchanted Islands is a remarkable work full of tales of the marvelous. It opens up exciting new ways to think about and understand the complex and diverse art and culture of Enlightenment France.