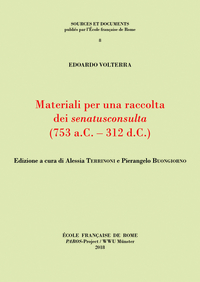 This volume makes available previously unpublished research materials on senatusconsulta (decrees of the Senate) assembled by Edoardo Volterra (1904-1984), on the grounds that they are not simply of historic interest, but have real scholarly value. Volterra was one of the most significant scholars of Roman law during the 20th century, having a particular interest in issues of the palingenesis of normative materials. Following his death, his large research library was gifted to the École Française de Rome (being now housed in the library at the Palazzo Farnese), with the intention of fostering research into Roman law. This generated several digital projects, including the Projet Volterra at University College London [1] , with which the author of this review has been involved, dealing with the imperial constitutions of the later empire; and LEPOR [2], based in Paris, which has been creating a new Rotondi (Leges Publicae Populi Romani, Milan, 1912) for formal Roman statutes.

Most recently, however, the PAROS project at WWU-Münster [3], led by Pierangelo Buongiorno, has been seeking to create a complete annotated palingenesia of senatusconsulta for the period 509BC to AD284. The work of Volterra himself has turned out to be not only a key inspiration, but also ingredient, for this project. As early as 1940 Volterra published an article on senatorial decrees in the Nuovo Digesto Italiano, which included a brief annotated register of almost 200 items dating between the 2nd century BC and the 6th century AD. This was expanded, in detail more than in number, in the Novissimo Digesto Italiano (Turin, 1969). Both these articles have been republished with background essays by the PAROS project. [4]

But even more significant, Volterra's papers, deposited along with his library, have been discovered to contain extensive materials for a "complete and systematic" collection of senatusconsulta, which was barely reflected even in the 1969 article, and which he was working up for publication even at the time of his death.

Three introductory essays discuss the general background to respectively Volterra's material (Buongiorno, 1-11), the methodological context for the regal and early Republican material (Thibaud Lanfranchi, 13-35), and the editorial principles adopted in publishing the Raccolta and repertorio (Terrinoni, 37-60).

Spread across ten boxes among the Volterra papers (detailed at 2-8, 38-46) are two types of material. First are Buste 400-401 containing in final form and almost ready for the press, the Raccolta of senatusconsulta in chronological order covering the years 753-389BC. These survive in broadly parallel manuscript and typed carbon-copy versions (sample images at 50-55). There are in total 297 items in two sequences (nos. 1-197, 1-100), which are printed with continuous numeration (at 63-374), but with two anomalies (no. 277b [=88b] is a later addition, no. 290 [=83] a missing phantom,). Further, one item (no. 26; Q. Marcius Rex) rather belongs to the 2nd C. BC (Lanfranchi 15). These entries clearly show how Volterra prioritized the verbatim quotation of the sources (although his Italian translations are not included), with varying degrees of discussion (sometimes none at all), and only limited citation of scholarly bibliography. The editors do not intervene to supplement or update the bibliography, although they sometimes choose to follow alternative editions of the ancient sources and add missing paragraph references in square brackets (43-45).

The second type of material scattered in the remaining boxes is much less complete and comprehensive (sample images at 56-60), creating a more sketchy, but still chronological, repertorio. This is printed (377-541), not as numbered separate items, but under headings by year or by period/reign, covering the years 386BC-AD312. As this represents Volterra's ongoing research, there are certainly items missing, which would no doubt have been added later (e.g. Codex Justinianus VIII.47.10.3/Justinian, Institutiones III.1.14 [but listed at Novissimo Digesto Italiano no. 199]; Lactantius, De Mortibus Persecutorum XLIV.11 [Constantine made senior emperor]). Further, expected material from some key authors (e.g. Dionysius of Halicarnassus), on which Volterra certainly worked, seems not to have survived substantially in these boxes.

What is provided overall, therefore, is extensive but not quite complete source-material for senatusconsulta. Unfortunately, after a lifetime of engagement, Volterra never reached the point of producing a definitive discussion of senatusconsulta, nor did he lay out clear identifying criteria for his choice of material. Thus the Raccolta is not prefaced by a Volterran introduction. Lanfranchi (21-34) tries to reconstruct Volterra's approach from various scattered statements, revealing an almost uncritical focus on the sources themselves that hoovered up almost all descriptions attesting senatorial decision-making, or even any senate-related activity (e.g. nos. 9, 40). These come not only from the legal and epigraphic material, on which earlier scholars had concentrated, but also from previously ignored literary sources, which allows increased coverage of earlier periods. However, if at times sceptical of reliability, Volterra did not address general methodological problems, especially for those texts dominating the Raccolta, the literary sources for regal and early Republican Rome, such as Dionysius, Livy or Plutarch. Nor did he make any attempt to weed out the fictional or anachronistic. The idea that there were senatusconsulta, or even a senate, under Romulus, or that we could know anything about them, may be far-fetched. But the items listed certainly tell us how later sources retrojected contemporary assumptions about the Senate, or how they otherwise imagined or chose to present the past.

This volume, therefore, is precisely what it says, materiali, and is likely to be superseded soon by the newer repertoire being created by the very scholarly equipe behind the volume. Indeed, this has already happened in part, since that chronological period (before 509BC) excluded from the PAROS project proper, has now been definitively covered by Lanfranchi (with Clément Bur) in "Sénat et sénatus-consultes à l'époque royale: essai de mise au point". [5] They include a corpus of 44 senatusconsulta, explicit or inferred, from the regal period (at 64-130). This builds upon and updates Volterra's Raccolta, with which it substantially coincides in sources and sequence (Volterra nos. 9, 26, 39 are excluded; Bur - Lanfranchi nos. 3, 5, 7 and 27 are new). The scholars accompany their essai with a substantial historiographical discussion of the uncertain and contested nature of the senate and its function in the regal period. Their use of Volterra's groundwork from his Raccolta is a testament to his assiduous and thorough immersion in the sources. The publication of his Materiali, therefore, is a suitable monument to the research-career of a great romanist.