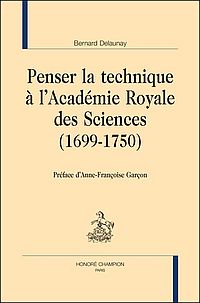 Penser la technique à l'Académie Royale des Sciences (1699-1750) is the published version of a doctoral thesis defended in 2013 at the Université de Paris I, Panthéon-Sorbonne under the direction of Anne-Françoise Garçon. Overall, the book is a very French contribution to the scholarship on the history of the Old Regime French Royal Academy of Sciences (ARS), one that contributes some new insights while generally staying within the established paradigms of the traditional scholarship.

The work is distinctively French in two respects: 1.) in its almost exclusive reliance on Francophone scholarship produced by French historians of science and technology, and in its general neglect of non-French scholarship, especially the recent Anglo-American scholarly literature; and 2.) in its analytical methodology, which approaches the academy not as a site of human-historical interaction among savants and royal administrators, or as trading zone of embodied practice, but as a conceptual space useful for studying the socio-epistemological history of technology as a field of ideas and intellectual formations within the larger intellectual history of modern scientific thought. Certainly there is no problem with a study framed by the distinguished examples offered by French scholars such as Eric Brian, Liliane Hilaire Perez, Simone Mazauric, Roland Mousnier, Daniel Roche, Claire Salomon Bayet, René Taton, and Hélène Verin, not to mention the great legacy of Pierre Bourdieu who is not cited but stands behind all of this French scholarship as an influence and inspiration. But a new international historiography of the Old Regime ARS has developed in recent years at the nexus of a new transatlantic community of historians of science and technology working both inside France and around the world. Viewed from this recent perspective, the absence of Stéphane Van Damme's name among the French historians listed in Delaunay's bibliography, and the limitation of the Anglophone works mentioned to much older works by Roger Hahn, James McClellan, Alice Stroup, and David Sturdy marks the book as one detached from the most recent scholarly thinking. In its focus as well on a very abstract and intellectualist as opposed to practice-based notion of the histoire des techniques, one which makes it a sub-topic of the histoire de la pensée scientifique moderne writ large, the book also develops an account of technology at the ARS that is as representative of the great French tradition of socio-epistemological histoire des sciences et techniques as it is out of step with the more recent scholarly trends of the newer international scholarship.

Divided into six conceptually organized chapters each titled by an infinitive verb - respectively "Examiner," "Expertiser," "Décrire," "Étudier," "Enseigner," and "Penser" - the book does not offer a conventional historical account or argument about the role of technology in the development of the ARS in the first half of the eighteenth century. It rather surveys a variety of moments in this history, using case studies about particular machines, inventions, and episodes in the histoire des techniques at the ARS together with the analysis of quantified data sets, the study of historical discursive formations, and the examination of conceptual epistemological tensions and dynamics all in service to an extensive, if sometimes inchoate, account of the topic proposed. As with many published doctoral dissertations, there is a great deal of empirical content presented in the book, much of it analyzed in insightful ways. But also indicative of its origination as a graduate thesis, the book lacks a unifying thread or thematic argument that ties all of the many discrete pieces into a cogent and coherent whole. The book appears in its best light as a compilation of individual parts, and while this presents challenges to any reader seeking to digest the book in its entirety, it certainly presents opportunities for selective reading by scholars seeking greater insight into technology in eighteenth-century France, not least because many of the individual case studies are new and not well known, and the analyses offered very often original and insightful.

The book is at its best, in fact, in its copious research, its innovative interpretations of individual cases, and its insistent inquiries into what was developing beneath the veneer of the published face of academic science. The book also makes an important, and still too infrequently made, point in its periodization, marking out the 1699 reform of the ARS as a decisive moment of change. Almost a half-century ago, Robin Briggs noted the absence of any real commitment to technology and the applied utilitarian sciences in the early ARS, and Delaunay implicitly accepts Briggs's thesis by insisting rightly that a new modernizing era of sciences techniques was initiated in France after the 1699 reform. Making 1699 a starting point for this history is the right thing to do, but Briggs also noted all the commitments to technology and the utilitarian sciences by the French state outside of the ARS before 1699, and his point was that 1699 marked a moment of change for the ARS as an institution, not a moment of change for the history of technology and state in France overall. These changes around 1700 have also been studied fruitfully in recent years in an award-winning book by another accomplished member of the new transatlantic community of historians, Paola Bertucci (Artisanal Enlightenment, Yale University Press, 2018), and while Delaunay's book certainly adds some new insights to this developing historiography, his decision to make 1699 a firm starting point for his work rather than a moment of dynamic change itself is disappointing.

Given its particular intellectual vantage point and focus, it is hard to say what, if any, significant changes to our overall understanding of the place of technology at the ARS are achieved by this book. Whatever the verdict, it is certainly a very thoughtful and learned study that never stops asking interesting questions and offering new perspectives.