Ingo Gildenhard / Martin Ruehl (eds.): Out of Arcadia. Classics and Politics in Germany in the Age of Burckhardt, Nietzsche and Wilamowitz, London: Institute of Classical Studies 2003 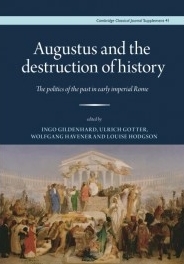 Augustus' bimillenium has yielded a rich crop of conferences and resulting publications. The present work, the fruit of a collaboration between the universities of Cambridge and Konstanz, is a valuable contribution to the genre. In its themes it has much in common with another recent volume (K. Morrell, J. Osgood and K. Welch [eds], The Alternative Augustan Age, New York 2019), with which it shares several contributors. Several of the chapters are linked to larger projects which have either resulted in recent monographs (Biesinger, Havener, Hodgson, Lowe) or are still in progress (Russell, Welch).

The editors have worked hard to give the volume a strong thematic coherence. The papers are grouped in thematic sections, and preceded by an extended introduction which presents them as wrestling with "the politics of the past in Augustan Rome and in particular the ways in which the princeps has managed to smooth over - or smother - the complexities of the historical record" (25). At its heart is the arresting concept of "the destruction of history", defined as "the transformation of historical time [...] into a realm of necessity that manifests the unfolding of an at least partially predetermined script, which includes the imaginary possibility of history coming to an end altogether" (3).

The first section considers alternative possible outcomes, through two studies of the young Octavian's opponents. Hodgson examines the phrase libera res publica, identifying it as a slogan first promoted by Brutus and Cassius in the aftermath of Caesar's assassination. Welch argues that, despite the constraints of the amnesty decree, it was Antony rather than Octavian who took the lead in seeking vengeance for Caesar's death. She makes a striking case, although the identification of Antony as the speaker praising Caesar at a contio in April 44 (Cic. Att. 14.11.1, 15.20.2) seems less secure than she claims (65).

The second section ("Augustan Plots") develops the volume's core themes. Biesinger focuses on the ludi saeculares and the Forum Augustum, arguing that their celebration of the Augustan present implies that "certain once prominent patterns of Roman history had come to an end" (94) and may help to explain the lack of contemporary histories. Gotter claims that for Augustus "the imperial mission takes on (and over) the function of libertas" (109) and relates this to the emergence of a territorial sense of imperium. He centres his argument on Aemilius Sura's account of the succession of empires, but the dating of this fragment remains disputed, and we cannot be sure that it is cited verbatim. Havener characterizes Roman historical memory before Augustus as "triumphalist" and asserts that the placing of the closed triumphal list on the arch celebrating his non-military Parthian settlement "demonstrated that from now on military success had to be commemorated against the background that someone existed who could not be surpassed" (131).

In the next section the focus turns to other elite groups in their relation to the princeps. Osgood contributes a brilliant essay on the Symean topic of family history: he illustrates the celebration of their families by both nobles and new men and the striking prominence of both themes in Velleius' history, and draws attention to the increase in public funerals and new developments in laudationes, now sometimes preserved epigraphically. Russell follows with an excellent paper on the consular list as it was inscribed on Augustus' arch (the Fasti Capitolini). She lucidly analyses how the list was displayed, with periods of political disorder reflected in irregularities in the epigraphic layout. She rightly insists that the monument's origin as an honour decreed by the senate is likely to have given that body considerable influence over its design, and intriguingly suggests that in displaying a comprehensive consular list with some space for further entries the senate was refusing "to accede to any suggestion of the end of history" and presenting "an inclusive, collective version of Roman history and memory" (180-181). Havener and Russell have thus propounded strikingly different interpretations of the associated consular and triumphal lists, which the monument's designers must surely have envisaged as complementary.

The fourth section ("Historical Palimpsests") is described as presenting "case studies concerned with the dynamics of sedimentation and reactivation, effacement and preservation that the superimposition of Augustan over republican realities brought into being" (33), but its two papers deal with very different topics. Price offers an evocative survey of the pre-Augustan past of the Forum Romanum, from its marshy prehistory on, stressing that Augustus' gleaming rebuilding of the space was also an "overwriting", which attempted "to establish an authorised version of Rome's past from a morass of different narratives" (220-221). Lowe provides an excellent survey of allusions (certain or possible) to Late Republican history in the Aeneid, and then argues that allusions to Sertorius can be detected not only in Silvia's deer, but also in Hercules' combat with Cacus. The parallels in the second case do not seem close enough to be convincing, but Lowe adds a very sensible warning that these and other allusions may sometimes just add colour and should not always be interpreted as conveying an allegorical or political message.

The volume closes with an extended "epilogue" by two of the editors (Geisthardt and Gildenhard), discussing Trojan themes and conceptions of Roman history in Catullus, Virgil and Tacitus. Catullus' longer poems, we are told, present a tragic view of the Roman past, to which Virgil responds in the Aeneid with a positive and determinist view of Roman history as culminating in Augustus, characterized as "Virgil's destruction of the future". The discussion of Tacitus focuses on the prefaces to the Histories and the Annals and the treatment of Nero's orgy and the ensuing Fire of Rome (Ann. 15.37 ff.), arguing that "the beginning of the Annals diagnoses the destruction of Roman republican history (and historiography) by Augustus", but "Tacitus uses allusive references to the poetry of Virgil and Horace in his Nero-narrative to drive a triumphant and mocking stake through the heart of the Augustan conception of history" (276). There is bold and imaginative argument here, but doubts obtrude. Thus Tacitus' portrayal of Augustus in the opening chapters of the Annals is subtly nuanced rather than unremittingly negative, as suggested here, while the sack of Troy is hardly as strong a presence in the fire narrative as the authors claim (cf. R. Ash: Tacitus Annals Book XV, [Cambridge, 2018], 178).

In sum, this is a very useful work: the papers cover a wide range of Augustan topics; all are stimulating, and some outstanding. The volume's core arguments, however, do not fully succeed in unifying such a diverse collection, and pose their own problems. Some of its most iconic products, like the Aeneid and the Forum Augustum, do indeed present the Augustan age as the culmination of Roman history. But I am not persuaded that they proclaimed the end, let alone the destruction, of history. Historiography flourished under Augustus, and, if no history of Augustus' sole rule was published in his lifetime, the omission was soon made up under his successors. Succession planning was always central to Augustus' concerns, and his Forum itself looked forward as well as back. He declared that the great men of former times in its statue gallery were to serve as a standard to which future "leading men" (principes) were to be held (Suet. Aug. 31.5), and contemporaries too were honoured with statues there, albeit (as several contributors note) of bronze rather than the marble accorded to their predecessors.