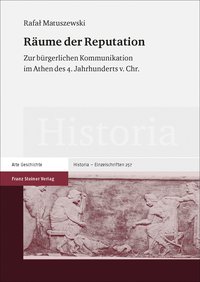 This is a revised version of a Heidelberg doctoral thesis of 2016/7, by an author (from Poland, but with a German vocabulary whose breadth this reviewer found challenging) who is now an Assistent in the University of Salzburg. As the introductory chapter 1 indicates, his aim is to investigate how far fourth-century Athens succeeded in creating a Brave New World of stability, peace and freedom (11). After reviewing different assessments of the contrast between fifth-century and fourth-century Athens, he announces his intention of building on recent studies to examine the different kinds of communication between members of the élite and of the masses, focusing on the "short fourth century", from the 410s to 322.

Part I comprises chapter 2, on spaces. Matuszewski considers first streets (mostly narrow, often unpleasant yet containing sacred sites, often places where conflicts arose, but places where people walked for various purposes), then the agora (as the city centre populated by people of various kinds, not chaotic but with different activities in different segments and at different times). He thinks atimoi were excluded only from the more solemn parts of the agora; and he notes the suggestion of J. L. Shear, about which I have doubts, that it was only after the oligarchies of the late fifth century that the agora became "the space of the democratic citizen").

He continues with more specialised sections on establishments where people might meet one another, of barbers, perfumiers, cobblers, bankers, fullers (though people would not stay there longer than necessary); on taverns (he thinks they were frequented more from the mid fourth century than earlier), gaming houses, brothels (widespread, but particularly in the vicinity of the Dipylon Gate), baths (frequented primarily by the upper classes and primarily for practical reasons, Matuszewski thinks), gymnasia and palaistrai (where primarily citizens of the upper class went to keep their bodies in good condition, but other men and other activities were increasingly included: there were private establishments as well as the Academy, Lyceum and Cynosarges). There will have been other places, in the demes as well as in the city, where people met one another, but Matuszewski has doubts about Athenian leschai.

He concludes that Athens was full of meeting-places, different people would go to different places, there was no "moral zoning" but some kinds of establishment were located in particular areas for practical reasons, and there were places where people of different kinds would meet one another.

Part II, on the social dimension, comprises chapter 3, on the body as a medium of communication, chapter 4, on image-creating through artefacts, and chapter 5, on reputation.

In chapter 3 Matuszewski studies human bodies, seen as reflections of character, though as time passed good appearance was less the preserve of the upper class, and in the fourth century a public figure had to appear as an ideal citizen rather than an ideal aristocrat. Matuszewski surveys facial expressions, hair styles and beards, gait, manners of speaking. More briefly he adds hiccups, sneezing and the like; politeness in encounters; and displays of emotion (where he notes that in the fourth century sophrosyne was not just an élite but a democratic ideal).

In chapter 4, on artefacts, he begins with clothing (and allows for fashion as well as ideological significance): even when certain garments were normal, when citizens, metics and slaves could not always be distinguished, and when there were no special uniforms for stigmatised people, yet there was room for varieties of material and colour. Leather, and hats of any kind, were characteristic of barbarians and rustics; the exomis was for those who needed to move their arms freely; the tribon came to be associated with Sparta and asceticism; while the chlanis was characteristic of the rich. What one wore and how one wore it could be seen as a sign of one's character.

Carrying a stick was originally a mark not of a citizen but of authority, but in the fourth century when not physically necessary it came to be seen as a sign of affectation.

Houses were not just living-spaces but conveyed a message about those who lived in them. Non-citizens could own houses only if granted special permission; some houses were larger and grander than others, some locations were smarter than others, but grand houses did not always have grand exteriors, and a litigant might play down his own house in order to avoid envy. Though Demosthenes exaggerates, rich houses were more ostentatious in the fourth century than in the fifth.

Tombs sent a message, and funerary sculpture after a period without it resumed c. 430. Commonly not individuals but family groups were depicted, and the deceased was represented as generically good. Rich men could have modest monuments, though sometimes within a family enclosure which emphasised the continuing status of the family. Image and text must be read together; tombs were placed in frequented places; recognition of the deceased's virtues shed glory on the family, and did not isolate the private sphere but incorporated it in the public.

In chapter 5 Matuszewski considers reputation. Democratic Athens abounded in competitiveness; philotimia, viewed unfavourably in the fifth century, was increasingly viewed favourably, and honours for citizens proliferated. Because of the dokimasia, even officials appointed by lot needed a good reputation. Political participation was widespread (though not all the arguments for increased participation in the fourth century are cogent). Reputation contributed to social capital, which was important in an undocumented society; rumours could be exploited by orators to support reputation or destroy it, and this increased the pressure on men to conform to expectations.

In a short Conclusion Matuszewski stresses that the places and manners of communication are important for studying the development of democratic Athens. He believes that, while institutionally Athens remained the same for two hundred years, socially and mentally it underwent considerable changes, and that in the fifth century the values of the élite prevailed (293) but in the fourth a larger body of Athenians took over and propagated the accepted standards and there was a greater and more widespread pressure to conform.

Matusewski is well read, in classical and in anthropological / sociological material, and here gives us a valuable and fascinating exploration. I am not sure, however, that he succeeds in demonstrating that fourth-century Athens succeeded in creating a Brave New World of stability, peace and freedom. On a few points he detects a change during the period which he studies, but the nature of the evidence for that period differs so much from the nature of the evidence for the period before it that it is hard to be sure how much and in what ways his period differs from the earlier period.