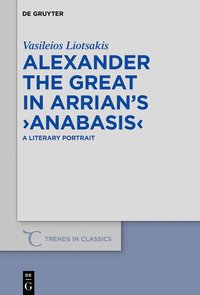 Arrian's so-called Anabasis of Alexander in seven books is our most completely preserved literary source for the life of the Macedonian king. Written sometime in the first half of the second century CE, it was based on the lost works of (almost) contemporary companions and historians of the Macedonian king. In the last century, the balance of modern scholarship has shifted; the sterile Quellenfrage and hunt for the original texts of Ptolemy and Aristobulus has been abandoned. Arrian and the other four preserved Alexander historians - Diodorus, Curtius Rufus, Plutarch and Justin - are now considered as authors in their own rights, but scholarly interest in these authors is very different. Recent decades have witnessed strong interest in Justin, while in the 1980s Arrian was the focus of four important monographs by P.A. Stadter, H. Tonnet and A.B. Bosworth. [1] Yet, after the second volume of A.B. Bosworth's fundamental commentary on the Anabasis of Alexander (1995), this work has been somewhat neglected. The monograph Arrian's Anabasis. An Intellectual and Cultural Study (2013) by B. Burliga is one of the few recent exceptions, and therefore Vasileios Liotsakis' Alexander the Great in Arrian's 'Anabasis'. A Literary Portrait is very welcome.

The Bithynian Arrian had an impressive political and administrative career in the first half of the second century CE, but there is no exact reference in the seven books of Anabasis of Alexander to indicate when or where it was written. Unfortunately, Liotsakis deliberately avoids this well-known debate as well as the controversy about which native land and which offices Arrian claims in the Second Preface of Book I is not at all unknown to his readers. In a note in the introduction Liotsakis restricts himself to references to the most important contributions until 2001. What Bosworth wrote more than two decades ago remains true: 'The absolute date of the Alexander history remains a stumbling block. Certainty is hardly attainable'. [2]

The subtitle of the study, 'A Literary Portrait', is essential to understand the purpose of this book. Liotsakis concentrates his analysis on the literary qualities of Arrian's work and its narrative techniques, together with Homeric aspects in the Anabasis of Alexander, without examining its contemporary Roman context. This method and the close focus on the work are very close not only to narratology, but also to new criticism, which treats the text as autonomous. The book consists of an introduction, four chapters followed by general conclusions, a bibliography and two useful indices: an index nominum et rerum and an index locorum. The introduction gives a brief overview of Arrian's lost sources and of previous scholarship on the imperial Greek historian together with summaries of the arguments in the four chapters. Liotsakis argues in Chapter 1, entitled 'Overall Design: From Praise to Criticism', that Arrian presents a favourable portrait of Alexander in the first three books of the Anabasis of Alexander but criticizes the Macedonian king in the last four books. Chapter 2 continues the analysis of Arrian's narrative especially the so-called 'march-narratives' to demonstrate the transition from praise to a more critical attitude in the last four books. This is followed in Chapter 3 by an analysis of types of temporal displacement, where Arrian disrupts his narrative to emphasize different aspects of the personality and moral values of Alexander the Great. Importantly for the understanding of Arrian's narrative, Liotsakis forcefully demonstrates that there are other anachronisms than the so-called 'great digression' in the middle of the Anabasis of Alexander (4.8-4.14), where Arrian interrupts the chronological sequence and relates episodes that highlights Alexander's character. In the last chapter, Liotsakis discusses the relationship between Homer and Arrian before offering his general conclusions in which he stresses the originality of Arrian's narrative and argues that 'it is now time for the scholarship of Arrian to enter a new era - an era in which his stylistic ingenuity will be no more examined separately from the issue of the originality of his speculations about Alexander's career.' (238) Liotsakis does not hide his light under a bushel, but his book is not such a novelty as he himself claims.

The analysis has several good points and Liotsakis convincingly demonstrates that the so-called 'fall of Alexander's character and popularity' (233) appears later in Arrian's narrative than in those of other ancient historians. Liotsakis stresses that Arrian only criticises the Macedonian king in 'a mild and embellishing manner' (227) and idealizes his relationships with the troops until the death of Darius III. Alexander's claim to be the son of a deity, the orientalising at the court and his excessive drinking, together with his uncontrolled anger, were popular themes in the Latin historians of the Early Empire such as Livy and Tacitus, but this Roman tradition of 'Alexander the Tyrant' which must have been familiar to Arrian as a senator and consul suffectus, is completely absent in the analysis of Liotsakis. On the other hand, Liotsakis points out other criticisms of Alexander in Arrian's work than the orientalising, corruption of power and megalomania. According to this analysis, Arrian disapproves of the Indian expedition and the cruelty of Alexander the Great during this part of his campaign.

The merits of the present study are obvious. Liotsakis' study is stimulating and provides new insights about the narrative of the Anabasis of Alexander which are important for our understanding of Arrian's work and its value as a source for the life of the Macedonian king. The analysis would, however, have been strengthened if Liotsakis had made brief comparisons with other contemporary literary figures or at least other preserved works written by Arrian.