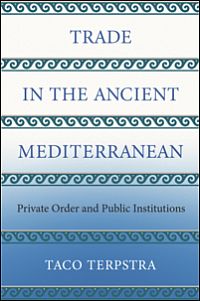 This ambitious monograph sets out to explore the history of trade in the ancient Mediterranean from the mid first millennium BCE until the middle of the first millennium CE. It does so through four loosely interconnected case studies that each zoom in on an element of trading practice and follow upon each other chronologically. The introductory chapter sets out the historical background - gradual economic expansion, and state formation, particularly in the last centuries BCE - and introduces some of the key concepts. Embracing the currently popular interpretative framework of Neo-Institutional Economics, Terpstra builds his argument around the idea that polities in the ancient Mediterranean without exception were 'natural states', which contrast with 'modern' (Western) states in that they are less formal, and revolve around a dominant coalition of key actors with special privileges, rather than around 'official' institutions like the military, the judiciary and the police, and this is decisive for the way in which laws, contracts, and ownership can be enforced. The question at stake is, basically, what this meant for the history of trade in the ancient Mediterranean. Terpstra's answer is that it meant that key economic processes were managed through private order mechanisms.

The first case study, in chapter two, studies how this works in the case of trading diasporas, and focuses on the communities of Phoenician traders in the Greek and Roman Mediterranean. Terpstra highlights the close and lasting ties between Phoenician traders and leading figures in their home cities, and explores their embedding in host communities, in Athens, in the Aegean and in Roman Italy, arguing that state formation led to increasing formalization of such communities, while at the same time, as a phenomenon, they continued to belong to the private sphere, and allowed traders a safe environment that made it possible to take collective action against malpractice of outsiders - in the absence of third-party (state) enforcement.

The second case study, in chapter three, focuses on (state) predation, and contrasts the Roman Republic with the Hellenistic kingdoms. While the Roman Republic developed into a 'roving banditry', focused on short-term extraction of resources, Hellenistic states can be shown to have operated according to a 'stationary banditry' model which had more concern for longer-term stability and financial gain, and thus led to the emergence of more durable forms of state-propagated order. Using the third century BCE Zenon Archive, Terpstra shows how, indeed, this state-propagated order can to some extent be seen in the evidence, though it is also clear that there is no third-party enforcement - the state did not bother about an independent judiciary: Apollonius himself needed to take disciplinary action against malpractice by his agents. These are large conclusions drawn from one dossier, but to Terpstra's defence, this, of course, is about as far as the evidence stretches.

Chapter four, on 'civic order', turns to litigation, and to the way in which contracts were legally secured and enforced. Particularly focusing on the role of witnesses in the process, Terpstra presents detailed case studies of the wax tablets from the Vesuvian region - the archives of Caecilius Iucundus and of the Sulpicii - and from Alburnus Maior in Dacia, arguing that the similarities found in both locations point to forms of legal practice that were spread throughout the empire. Again, Terpstra presents legal practice as deeply rooted in community structures rather than depending on third party enforcement, and highlights how the consistent ways of ranking witnesses according to their social status both reflected and constructed a civic order that was essential to safeguarding the value of contracts within local communities, in the absence of accessible, institutionalized legal recourse.

The final chapter five dives into the complex issue of the unravelling of the ancient economy. While Terpstra acknowledges the role of environmental (and epidemiological) factors in the reversal of Rome's economic fortune, he argues that the role of human agency and institutions should not be underestimated, and goes on to illustrate this by speculating about the impact of (state-enforced) religious change on the dynamics of trading communities, which were traditionally held together by shared cultic practice. Discussing the violent destruction of the temple of Marnas at Gaza and of Serapis at Alexandria by the (Christian) authorities in the fourth and fifth century, Terpstra suggests this changed the way in which overseas trading communities from these cities could operate. Unfortunately, the chapter quietly acknowledges that there is rather little evidence that this actually was the case - though Terpstra's hypothesis about the role of changing institutions in late antique decline (or transformation) seems entirely plausible, it turns out hard to prove.

The book is concluded by an epilogue, and a short conclusion. The epilogue, in a rather traditional political-history manner, summarizes the decline of the Roman Empire in late antiquity, and its impact on the economy, but without a lot of attention for the micro-level issues that were central to the rest of the book. As a result, this reviewer felt that the epilogue connected a bit easily to the overall argument - it seems to address a different kind of question than the preceding chapters. The conclusion emphasizes, once more, the limited role of states in enforcement, and the crucial role of private-order mechanisms, and explores several aspects of the broader picture.

Overall, Terpstra's Neo-Institutional approach has clear strengths, and his case studies are valuable and thought-provoking contributions to ongoing debates about trade practice in the ancient world, particularly because Terpstra addresses the bigger picture without losing sight of the intricacies of the evidence: the case studies offer a wealth of detail and integrate a lot of marginal evidence into some long-running debates. At the same time, readers may feel that the book could have profited from a slightly more cohesive central argument - both the introduction and the conclusion maintain a certain distance from the case studies, and some of the points made in the conclusion - e.g. about the impact of the Roman empire on technological innovation - seem to come almost completely out of the blue. A more rigid organization, and a bit more investment in tying the case studies together, would have resulted in a more urgent narrative. Nevertheless, in its broad scope and ambition, Terpstra's book does point to a key direction ahead in the study of ancient economic history, and offers readers and scholars quite a lot to think about, and to debate.