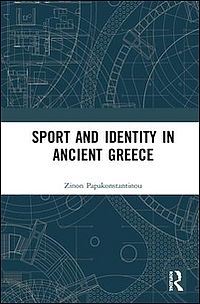 Zinon Papakonstantinou has been a prolific and important contributor to the scholarship and understanding of ancient sport. His new book, which offers, as he writes, "the lens of novel perspectives," will primarily serve specialists in this important subfield within the social history of ancient Greece. The book consists of an introduction, plus six chapters and an epilogue, and its time frame ranges from archaic Greece to the period of Roman domination. Each chapter has extensive endnotes, and there is a comprehensive bibliography.

The specialist reader will find discussion of many important texts, some familiar, but all with a critical focus on matters of identity. The book begins, for example, with the remarkable account found in Polybius 27.9 of the boxing match at the Olympics of 212 BCE between Kleitomachos of Thebes and Aristonikos from Egypt. Kleitomachos, noting that the crowd cheered for his opponent, rebuked them for supporting an "Egyptian," sponsored by King Ptolemy IV. The incident raises intriguing matters of self-image and nationalism, closely connected to the pervasive Ptolemaic desire to display and reinforce their Hellenic identity, as is evident to readers of Callimachus and to historians of ancient Alexandria.

Papakonstantinou illuminates the social messaging of monuments and their inscriptions and notes the reputational challenge of equestrian victories, in which the owner received the crown and the praise, while the real skill belonged to jockeys and drivers. He suggests that the commemoration of the horses on victors' monuments gave the owner a better claim on the victory through his success as a horse-breeder. His case for the ambivalence of equestrian victory can be made yet stronger by noting the remarkable collective equestrian victories of Argos, first with a race horse in 480 BCE, and later with a publicly sponsored four-horse chariot in 472 (P. Oxy. 222). These victories coincide with an aggressive embrace of democracy. For Argos, winning collectively as a city in an event quintessential to the aristocracy may in itself be egalitarian signaling, something that would repay consideration in a study of identity.

The focus on spectators in the third chapter is a very welcome addition to scholarship. Here, Papakonstantinou also takes up questions of enforcing order at the games and the varying opportunities for those typically excluded from the world of athletics, including women and slaves. He elegantly begins with a focus on Kaikilios, a third-century baker, who attended the Olympics 12 times, coming from far-away Beroea. Papakonstantinou notes the way in which sumptuous monuments celebrating the victory in the Persian wars at the sites of the major Greek games further reinforced a sense of Hellenic identity. The chapter offers an edifying view the wide range of practices at different Greek festivals regarding who would be deemed eligible to compete. Chapter four contains an excellent set of examples of procedures at local festivals: Papakonstantinou's focus on rules at the games at Misthia, which spread opportunities for victory more widely, is particularly striking. Chapter four also delves deeply into the social messaging of benefactions to supply oil to participants in the gymnasia: who receives and who does not illuminate social distinctions.

Papakonstantinou discusses the search for civic status and Hellenic identity in athletics, noting how even "worthy competition," though without victory, appeared on monuments, and how the desire for special recognition manifested itself (94-95). It would have been very helpful to have the author's consideration of long-standing and often-contested theories concerning what Jacob Burkhardt called "das agonale Wesen," the competitive nature of archaic Greek society. The question has had the attention, among others, of Friedrich Nietzsche, Johan Huizinga, Victor Ehrenberg, and more recently Ingomar Weiler. It is itself such a central, interpretive lens for understanding Hellenic civilization that the author's focus on identity might lead to important new understanding.

Although the author does not invite us to what might be termed a metanalysis of his innovative approach, it is important to do so. Is there danger of forcing a theoretical model on the evidence, which is often quite fragmentary? The author's speculation that a higher frequency of tied contests and joint victories reflects a desire for more elites to share in glory, is highly interesting, but did not the disposition of the prize money have a strong influence? In the discussion of "normative or deviant masculinities" and whether criticism of intense athleticism was directed at "top-tier professional athletes," it would have been useful to consider whether formidable aristocratic boxers and pankratiasts like Theagenes of Thasos or Diagoras of Rhodes and his family could have remained unscarred, if not disfigured, by the fierce contest, and, if so, what does "normative" really mean? (What are we to make, moreover, of AP 12.123, where the poet kisses the bloodied face of the boy boxer?) It might be productive to consider whether the "normative" Classical concept of kalokagathia, "the handsome and the good," could actually have resembled to some degree the 19th century German obsession with dueling scars.

It is not an insignificant concern that the language of critical theory that Papakonstantinou uses can be a barrier to a wider audience of readers, both those from the realm of classical studies and from that of sport history. Papakonstantinou does well to avoid over-generalizations, rejecting the view that sport festivals were "a one-way street for the social elites to impose their paradigm toward the less fortunate" (19), but this reviewer is not convinced that terminology like "hegemonic discourse," "embodied performance, "hegemonic metanarrative," "intervisuality or intertextuality of the visual," significantly advances our reconstruction of what happened and what it meant. Papakonstantinou's analysis of social classes in local festivals is outstanding, as is his interpretation in chapter five of the terms of praise deployed in inscriptions honoring athletes, their benefactors, and civic leaders. On the other hand, "Corporeal functions were in the Greek world - and still are today - a constant source of affective outcomes, most prominently pleasure and suffering" is a truism that does not add very much.

It would be wrong to end on a critical note. This book does indeed cause the reader to consider in productive ways the meaning of the rules, rewards, behaviors, and status of Greek athletics and is an important addition to scholarship in the field.